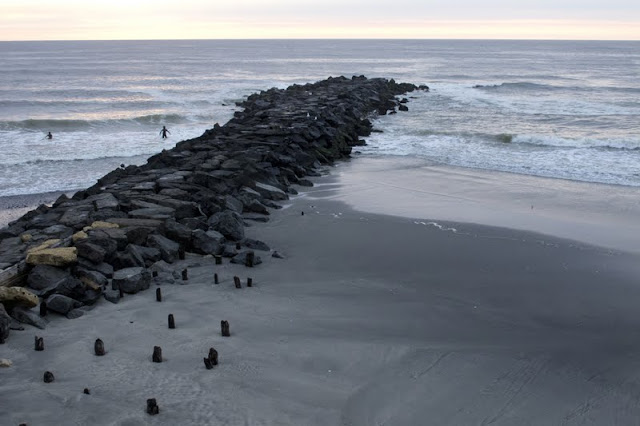 A "new" look Marine Place
It's Labor Day weekend. It's usually a busy weekend for me as I try and finish up any summer related assignments I have. This year is a mess. Hurricane Irene came and went and took with it the summer crowds and the feeling most have right before school begins. I am working on a story about the Raritan Bay during the summer. I went to Keansburg last night and there were about 50 people there, and they were dressed like it was fall, because it is.
There are a few more things I look forward to as fall approaches. One of them is back to school. "Happy Days are here again!..." I have three teenagers, 13, 14, 15 and each is growing up and wanting to do their own thing with their own friends, or just without me. Totally normal behavior, or they just hate me. So, I'm done with them for the summer. A few trips to Great Adventure, a day trip here and there, and the week in the Adirondacks and Montreal. They're done with me and I them. My youngest starts first grade this fall, and that's cute, but I'm glad she's going also.
Fall also means it's time to go back to fishing. The summer was a good one for those that fish the Upper Delaware. Steady releases and cool temps kept the West Branch of the Delaware prime most of the summer. I just read a post on Aaron Jasper's blog and he reports good fishing even after Irene, you can check more out HERE. That's a good sign as the West Branch went over 10,000 cfs and the East Branch approached 30,000. The West Branch of the Ausable in the Adirondacks ran low and warm through the summer. Like the other rivers in the area, we went from a blown out spring, to prime levels and temps, to droughty and too hot to fish. Then Irene came and damn near took all the towns that sit on its banks. In New Jersey I took a July trip out to the Big Flatbrook with my friend Tom, and we spent more time sitting in chairs shooting-the-shit then fishing.
By mid-summer fly guys and girls were targeting smallies, largemouths, and sunnies on the fly rod. Down on the beach things kind of went as planned. The stripers came, huge fish in big evening blitzes,  and went on schedule. Some said it was the best spring in a long time. For those with the fly rod fluke were available in good numbers although it was tough to get a meal out of them as 18 inches seemed to be a hard number to come by. I saw cocktail blues early on before the spawn, but not the big gators that we saw last year invade the Raritan Bay. We finished up the warm months with a huge phytoplankton bloom that stretched from New York down to Cape May. While I was out on the scallop boat last week I saw this stretch for miles and miles. It surely had an impact on the tuna fishery and there was fear it would affect the bait migration that will start soon. Yesterday in Keyport the fishing pier was alive with folks from all walks of life snapper fishing. I saw mostly small fish that should have been released although I saw a few to 7 inches.
This morning I started what will become the daily check of conditions along the beaches in anticipation of the albie and striper runs. I report weekly for the Orvis Fishing Report which you can see HERE, and my best advice I could give this week was to go out and scout. I report on beach, groin and jetty fishing and if you fish the same beat you'll be surprised to see the changes along the coast. Getting out during low tides and reading the "new" shoreline will pay dividends when you're fishing at midnight in late October. In the top picture you can see how the shoreline has changed at Marine Place, a usual great location for fishing for stripers as they crash through bait trapped in the hole in the north side of the groin. Also, did you ever see the large boulder that was perched on the end of Allenhurst groin, that has been relocated by the lovely Irene.
After a next week trip up to the Adirondacks for some post Irene work on the house I'll be ready for fall float trips for wild trout on the Upper Delaware and walk and stalk trips for albies and stripers along the beaches in New Jersey. Give me a call to set up a trip, 732.261.7291. 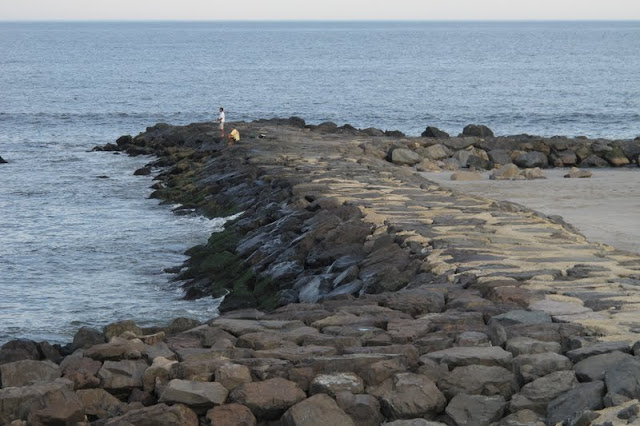 Allenhurst, less one large boulder at the end, post Irene 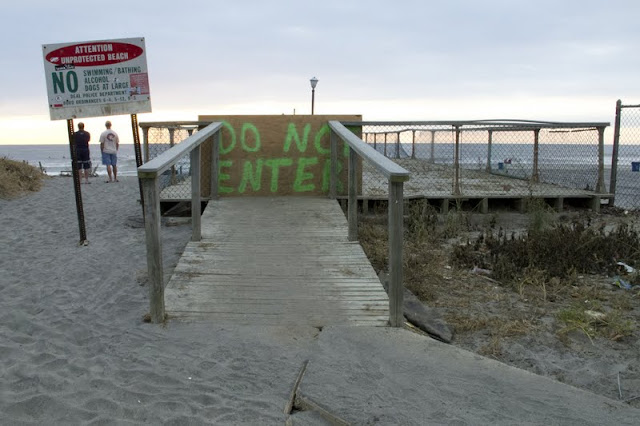 A favorite scouting location at Philips Avenue in Deal
Posted by The Average Angler at 8:44 AM