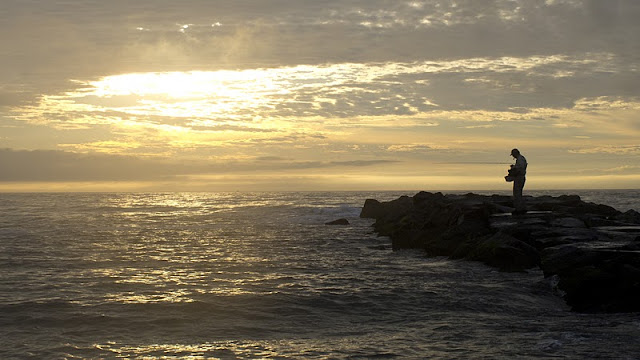 Got out just as the tide began to fall which was an hour before first light. I was hell bent on getting a bass to blow up on a Banger so I went with one and worked it in the darkness. The S wind came and went and I landed the fly over the breakers on the sand bars in Deal. Just at sunrise I had a schoolie breach as it went for the barbless-one-hook-fly. With plenty of time left I switched over to a black Clouser to imitate the mullet I could see in the crest of the waves. There was other small bait to that the snappers, now almost cocktail blues, were on, probably spearing.
As it brightened up I met up with Steve who is another regular fly angler. His home is on the rocks, and he can always be seen out towards the end, cigar in mouth. I worked the wash as I made my out of this stretch of water. Two spin guys with Ava's caught two bass to 24 inches at daybreak.

The bait is here, the bass are here, water is still around 68 degrees.

I stopped by 8th Avenue and talked shop with regular, I mean several times a day regular, Gus who fished this morning, and the last several days without a fish. He did say albies showed up and blew up on mullet right at the tip at 8th Avenue a few days ago. But like albies are, they were here, and then gone. 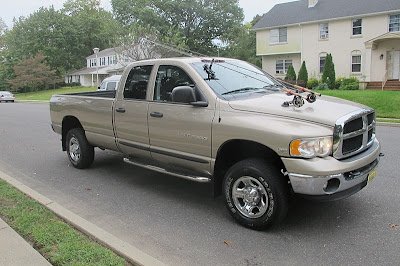 In other news, got my truck back from Ryan's Auto Body in Ocean. They fixed it all up after my deer accident. Looks good as new.
Posted by The Average Angler at 5:53 PM