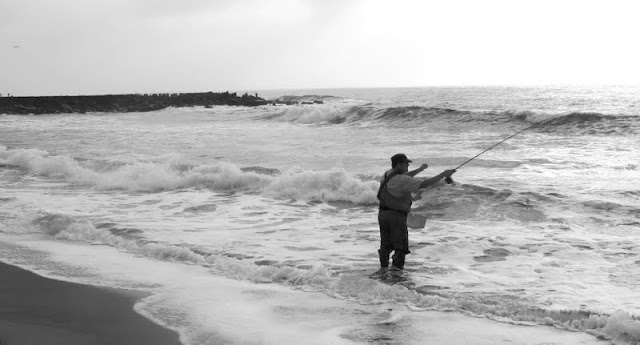 I got out early this morning and stopped at Allenhurst before settling into Deal. I talked with a guy who said the last two nights have produced fish, and that Wednesday there were "epic" blitzes along Monmouth County. It's been late afternoon to early evening. All quiet- then things blow up- and then it's quiet again. I heard the bass were trapped at the Breakwater and "60" huge fish were harvested. Glad I wasn't there. 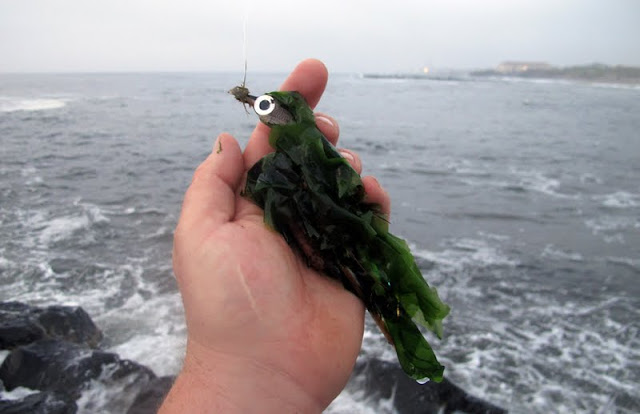 But this morning started out grassy on Phillips and slow and remained that way all morning. I fished the wash north of Phillips without results and then headed north to the Alley and fished the waters behind the rocks there. I really like the water and beaches there, untouched by beach replenishment. I stayed for about an hour with a few other guys and tight boats but saw no hook ups. Later I scouted at Marine Place and watched as a pod of dolphins rolled through bunker about 500 yards out. I then watched a fly guy head down the rocks, turn and look, see a few fish busting, and then run back down to the end. I quickly pulled around to Deal Esplanade, parked, put on my spikes and went out on Marine Place. By the time I got there  it was gone, if it really even ever showed itself. My thought was it might have been blues.
Posted by The Average Angler at 10:04 AM