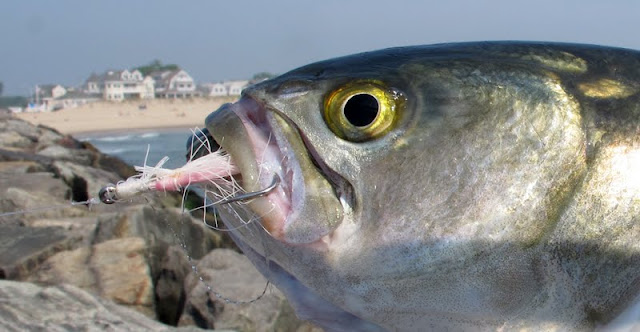 It was time for me to update my Orvis Fishing Report, which you can see HERE, so I decided to drive my beat from Monmouth Beach to the Manasquan Inlet. Things were quiet as the low tide approached. There were a bunch of boats off of Allenhurst but they quickly broke up.
I pulled into a parking spot on the Manasquan Inlet and grabbed my camera to go and see what was happening on the jetty there. About three quarters of the way out I spotted some schoolie and keeper sized bass swimming along the rocks. The water was crystal clear and they were in no rush just going up and down the feeding lane. All I had was my binoculars and camera. So I carefully went back to my truck and retrieved my "new" Helios 9 ft 10wt and a few flies and headed back out. I was rigged up with my Depth Charge line and 7 ft fluorocarbon leader down to 15 pound tippet. It was fun sight casting to stripers, although being 25 up, and 20 foot out and above the rocks makes it a little nerve wracking. I had a few follows but had to pick up or bury my line or fly in the mussels that cover the rocks.

Soon schools of silversides were traveling the same beat and bluefish in the 3-5 pound range were on them. I hooked into one and had a hell of a time landing it. Remember, I broke a Helios fly rod last week attempting to land a striper on the rocks in Deal. I managed to crawl down and get a grip on the fish before a quick pic and release. It went well, but there's a lesson here. Irresponsibly, I was "armed" with worn out Crocs on my feet, no spikes,  no net or gaff ( not that I use one) or other device to help land a fish from the jetty during dead low tide. During the last week I busted a rod on an attempted landing, and busted my ass on the rocks in Deal when my spikes came loose on my foot and my foot came out.
I think it's okay to kind of go and throw off the beach, but when you are fishing off the jetty or groin you have to either go all the way or no way. There's three things that could happen, the angler gets hurt, the equipment gets damaged, the fish gets stuck it the rocks or injured trying to land it. I have to look into a net for fishing the rocks, or some other catch and release contraption.
Posted by The Average Angler at 11:19 AM