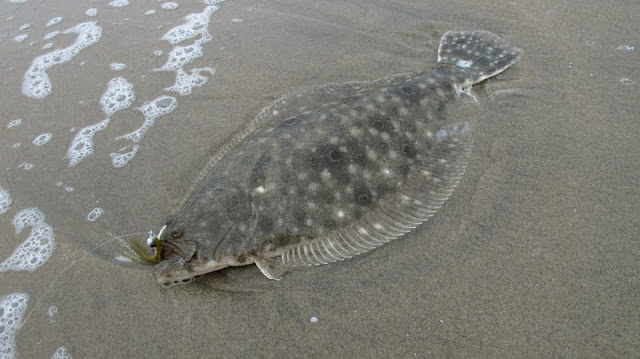 Fluke, aka summer flounder, taken on a Half and Half in Avon
Went out at 5am looking to fish the outgoing tide. Started in Avon where choppy grass filled waters reminded me of a warm West Branch of the Delaware after a heavy release. After every cast the fly or leader knots had to be cleaned off. I was in the hunt for stripers, but soon was catching fluke, aka summer flounder and sundials in the wash. I had one keeper sized fluke (above) that hit a Half and Half like a bus. My fellow anglers were in shock as I released it back into the ocean.
I stayed there till about 730 and then drove up to 8th Ave in Asbury Park to see if it looked any different there. Another stop check in Allenhurst before settling down in Deal. Deal didn't have the same  amount of seaweed in the water, but it was more stained. I started fishing between Phillips and Brighton and was soon back into fluke again. I fished the wash between the groins and lost more then I landed. I jumped to the north side and fished there without getting a fluke before calling it a last cast at 915. Then on my last retrieve next to the groin,  a striper jumps clear out of the water. I went at him with the half and Half, switched to a Deciever, then finished with a Softy Minnow. I made 1,000 casts for the next 45 minutes to no avail. Today I'll break my saltwater gear down and give it a good cleaning as I'm heading up to the lodge in the Adirondacks for a few days. 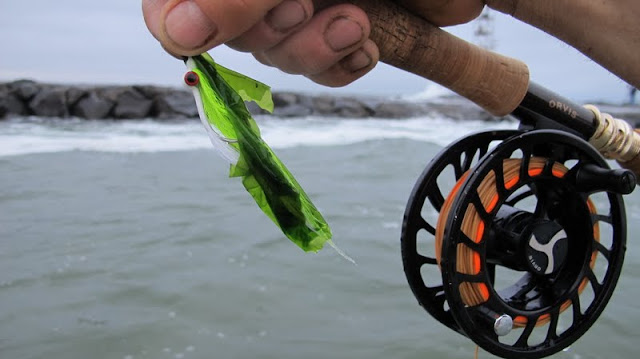