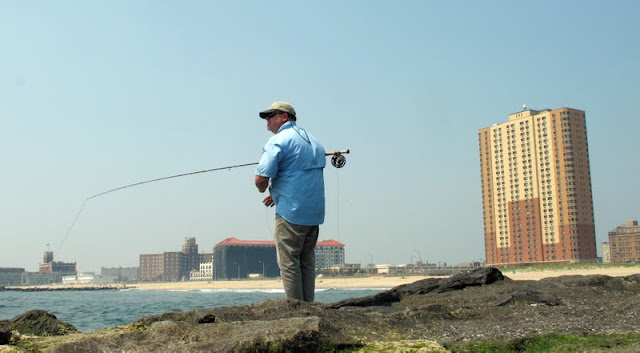 I had a last minute opportunity to have breakfast with my buddy Al. Al is my wise old jedi striper master. He's the one who got three in 30 minutes last Friday. I wrongly listed his age, it's not 84, it's 87! Three fish to 30 pounds. The biggest problem he said he had was trying to lift them up out of the water to get the hooks out and release them. He's on his way to Cape Cod and has hired a boat for two half day trips.
Since I am a little jammed today I decided to stay local. After breakfast I hit 8th Ave in Asbury Park and met up with another friend Nesmond. He was excited to see his picture on one of my business cards. It was a shot of him I took here last year. That's him below, 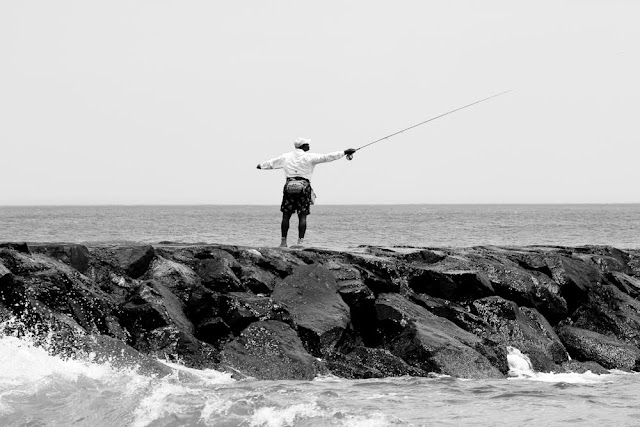 Nesmond on 8th Ave, 2010
We talked for a bit while we melted from the 90 plus degree heat in the parking lot. I think the senior citizens building blocks the wind because it was just dead heat. There was a south-west wind and that felt a little better on the end of the groin. I stayed for about an hour watching as boats moved along Allenhurst and Asbury Park following small pods of bunker that had fish mixed in that were busting on the top. The birds were overhead and did move within casting distance for someone other than a fly fisherman. The sun was high and bright and the water crystal clear. I fished along the submerged rocks on the incoming tide with no bumps or hits.
Posted by The Average Angler at 12:34 PM