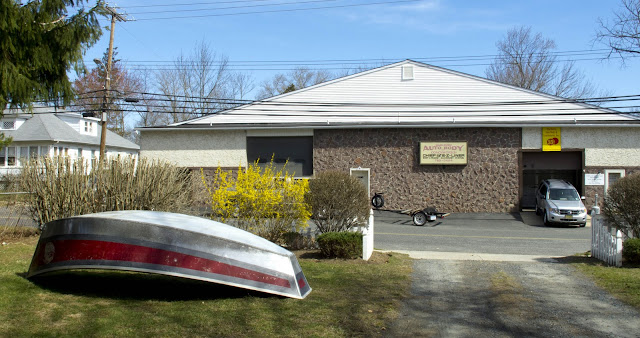 After all that work this weekend, here's where "Julie the drift boat", as my daughter named here, wound up. I was able to paint the bottom late last night and although it was still a little tacky I had to move it from the shop and get it over to Marlboro Auto Body for paint. John, whose family owns the business, rolled his eyes when he saw me. He said, "Oh, I was hoping you forgot about painting it.". Nice. No respect. I picked out a green which kind of looks like the Jet's color. It's going to be one solid color. If I want I can always add a stripe or something to it. Right now I just want to get it painted and ready for Upper Delaware.

I scanned the web and read fishing reports from the Raritan Bay down to the Great Bay. Basically, it's still February around here. Water temps just topping 40 degrees. It's shut down until we get some warm weather. Graveling Point is vacant according to Scott's Bait and Tackle out of Mystic Island. Betty and Nick's is reporting that bunker have been spotted around Barnegat Bay and that blue fish were seen ripping through them.  I think we are three weeks away from any decent fishing.
Posted by The Average Angler at 6:14 PM