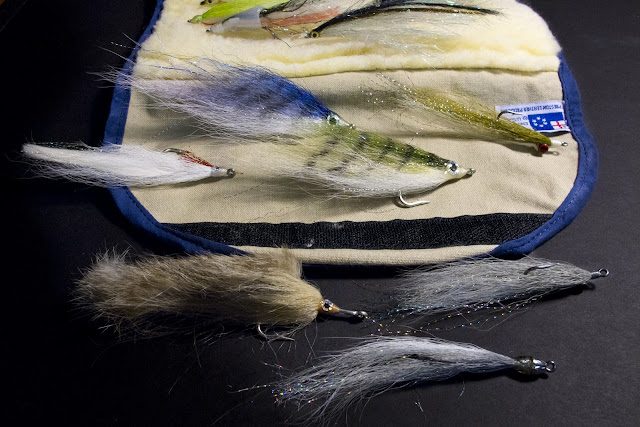 Pretty crappy weather in the northeast these days. The rivers around are settling down following a bunch of rain the other day, but more rain should wreak havoc on the usual flood zones. In New Jersey the Passaic and Pompton Rivers always crest and flood out neighborhoods in the area. The Delaware around Trenton usually rises and floods out a section called the Island. The West Branch of the Delaware had calmed down from a high of almost 6,000 cfs the other day to 1,130 now.
I had a little break in the action today so I broke out some of my bins and gave my flies and gear a quick glance over. It definitely pays to spend some time doing a check before the first outing of the year. I am at heart a fly buyer rather than a fly tyer. So I always need to check on the stock with the change of each season. Rod, reels- check, then the fly lines- check- well hold on. I think it's time to change the old fly lines. I have been doing some research on the different lines in addition to checking them out and talking with the reps at the Fly Fishing Show in January. I will be replacing my intermediate and sinking lines so it's a fight between Rio, Airflo and Scientific Anglers.
I gave my friend Dave Chouinard a call to see what he thought about a good supple line for stripers. While up in New Jersey he used and sold all types of fly lines while owning The Fly Hatch. As you all know Dave moved to Florida, opened and ran The Tampa Angler before closing it, and is now the Southeast rep for Simms. He can been seen on the highways and byways of the south in his RV,

I was sure he would be a great resource, as always, on this. He always has some super intense fact filled dissertation on whatever topic I happen to bring up, and most of it is usually rests on the tip of his tongue. So we went back and forth about what kind of fishing it was for. What kind of rod and reel I was putting it on. If I wanted to be "one up, even, or one down", and where in the water column I was looking to get my flies to. Our conversation went around and around and we finally decided the first line would be Rio's Striped Bass Intermediate fly line. It is a line I currently have on my Redington AL 9/10, that has served me well for years. Both the line and the reel are retiring before this season starts. I find many times anglers use one fly line around the calendar, regardless of what and where they are fishing. Especially with stripers and albies, having several fly lines readily available will increase your chances of hooking up.  The next line I'll decide on is a good sinking line for a 10 weight Helio's. So I'm looking into Rio's Striper 26ft DC, Scientific Angler's Mastery Textured Coastal Express, or Airflo's Di7. More on the search to follow.
Posted by The Average Angler at 5:14 PM