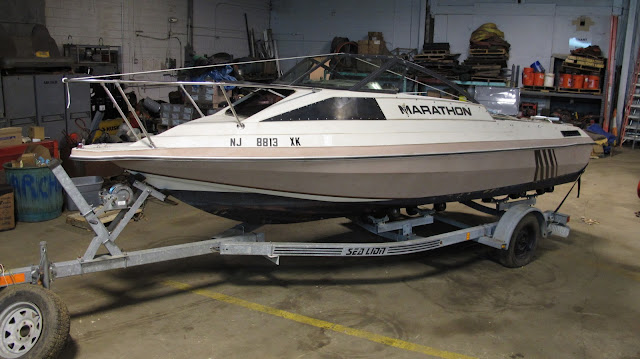 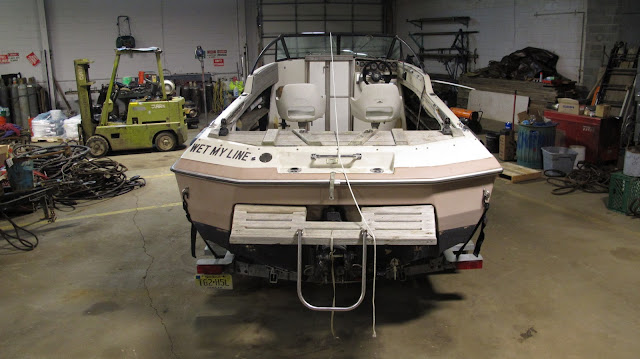 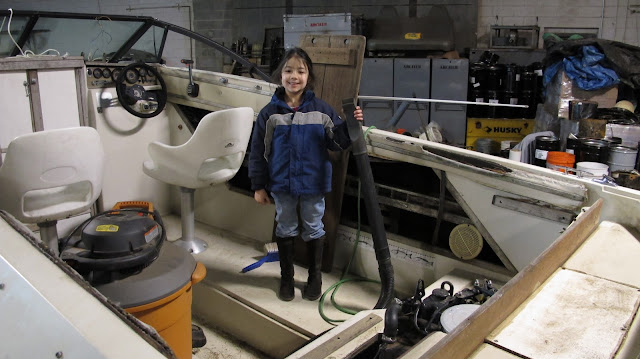 I know this blog is about The Average Angler and fly fishing. Today's a little off topic. At least there's a boat in the picture. Last nights Further show was great. First set was a little slow for me although Bob Weir and the gang did a nice "Lovelight" before the break. Second set was great starting with " Playing in the Band" and an encore of "One More Saturday Night" In between was a great "Terrapin Station" and a really good "Help on the Way" into "Franklins Tower." I am sure I missed some other songs, wait, there was also a really good "Stella Blue". That was for any old Dead fans out there. I'm not lying when I say I miss Gerry (whoops Jerry, thanks) and the good old days.
I was back at it checking on the drift boat progress this afternoon. Due to the temps in the shop the Gluv-It was just finishing up it's cure so I had to wait till late tonight to paint the bottom. So since I was there my number one helper helped me work on the "other boat." That is a 1986 20 foot Marathon cuddy. I purchased it in 2003 and had it in the water at a marina in the Shrewsbury River for one season. It was winterized and had been in some poor storage outside my fathers shop since. Most tell me to junk it, of course I think it's still wonderful.
So it's the weekend and I had to finish up with the boat. No problem, I'll get some of my gang to help and it will be fun. I have four kids. Two boys an two girls. 5, 12 and two 14 years old. I mentioned that I was working on the boat to the kids, guess which one jumped at the opportunity to help? Of course it's my five year old. Five year olds are the best. And she's better than the best. She is always right there willing to do and help out with whatever I am doing. Taking out the garbage, cleaning up, watching the Nat Geo channel, going fishing, working on an old crusty boat. They say that's normal teenage behavior, who wants to hang with dad. I ask my partner all the time if she could just stay five. But, she to will grow up and want to do her own thing. I just hope by then all the work is done!
Posted by The Average Angler at 11:29 PM