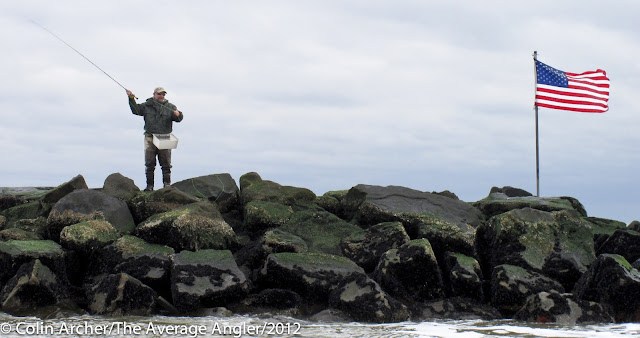 Had Charlie 'Bunky" Limpert down from Pennsy today for a nice boat trip to catch up some stripers on the fly. I read the NOAA small craft advisory and prediction of NE 10-15 with gusts to 20 and 3-5 foot seas. I thought about trailering the boat down to Atlantic City to fish the bay but that water has been dirty and the bite is all about the bait.
We got down to the beach around 630 and NOAA was close if not right on so we opted for a day fishing the inlet and the rocks. While walking up we saw the damage to the seawall on the Avon side just west of the bridge. With each swell that came in the metal decking move in and out letting water into the land side. We watched as a brave, or less than smart, angler made his way out past where the north tower once stood to fish off the front of the now collapsed tip. Several times the waves broke over the jetty and he made a hasty retreat. We fished the outgoing along with a handful of anglers and between us all we threw flies, metal, Bombers, poppers, bucktails, and a guy soaked clams- all without a bite. I thought the picture of Charlie walking on the sidewalk in Avon was telling. People have sand piled up on each side of their driveway's like it was snow.
We took a drive north looking for some fishy and less than turbid water and stopped as north as Sea Bright. It was my first time there since Sandy and they took a hard shot. It looks like every business and home was damaged or destroyed. The below pics are of the Driftwood Cabana Club, homes along the seawall, and boats that had left their marinas and came to rest on Gunning Island in the Shrewsbury River.
After a bite at the Windmill and a drive through Pier Village I couldn't help but notice and photograph the large pile of people's possessions from the damage from Hurricane Sandy. It seems that each town has set up a "transfer station" in order to expedite the removal of the debris from in front of peoples homes. We settled down into Allenhurst and had fun casting flies into Yoo-Hoo colored water hoping that just one striper was around for a late afternoon snack. I was sad to see that Mr. C's was so heavily damaged by the storm. It seems the entire wall that supports the restaurant and the Allenhurst Beach Club has been compromised. 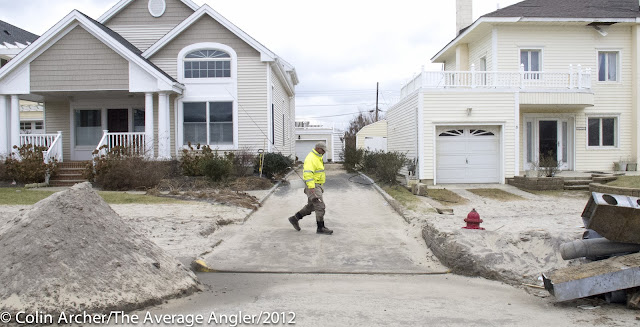 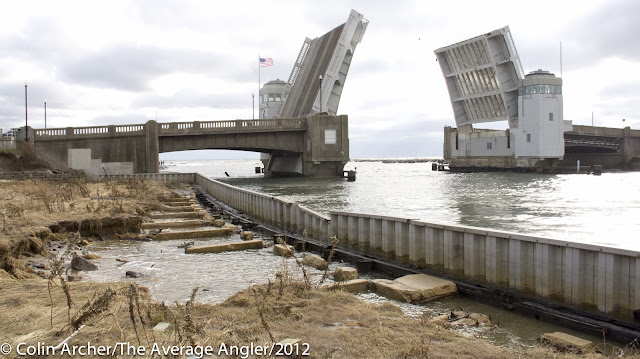 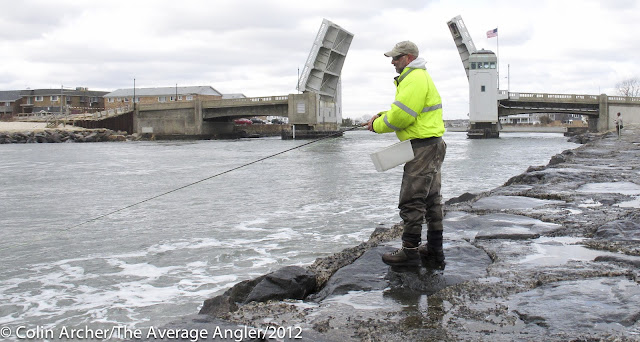 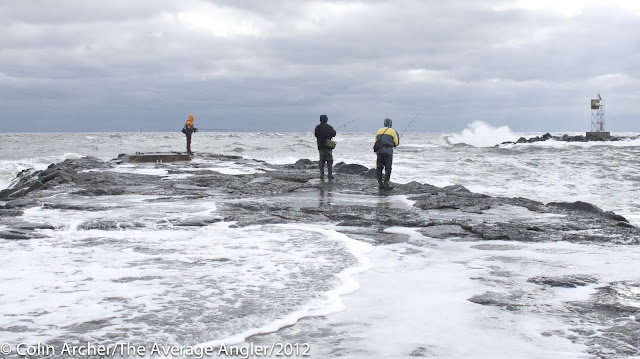 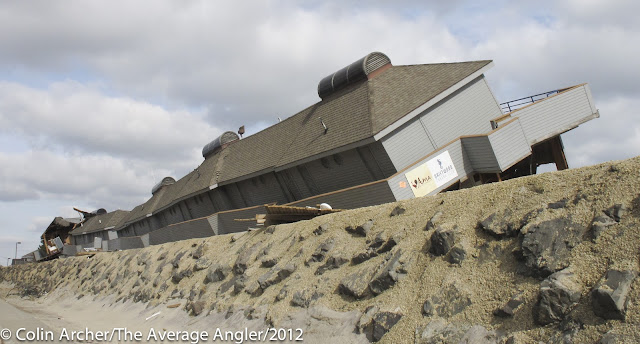 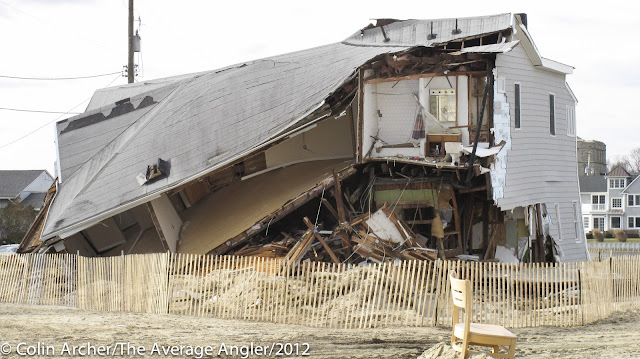 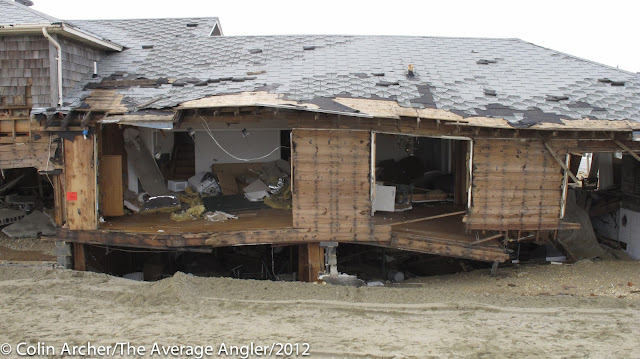 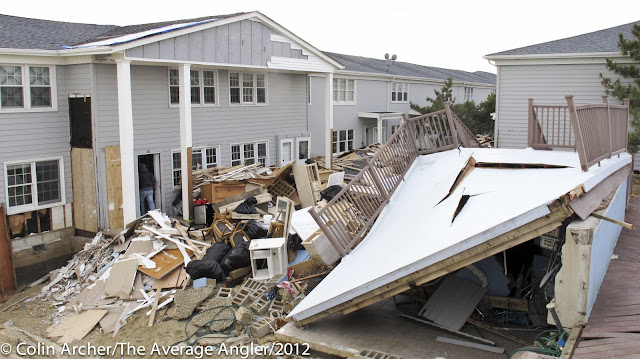 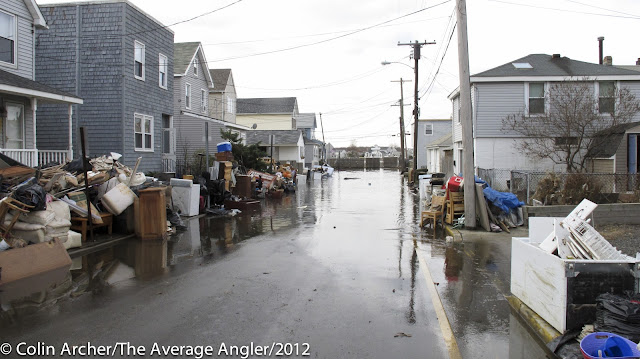 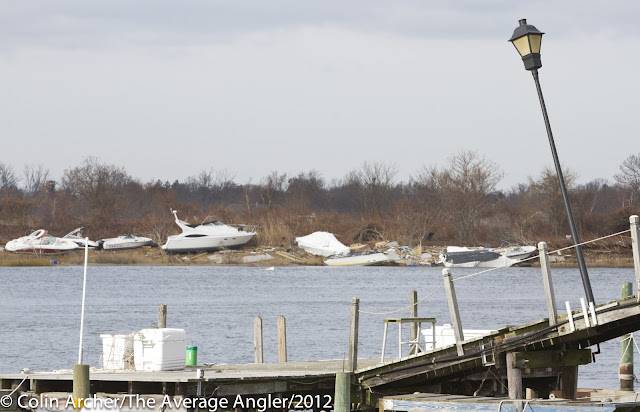 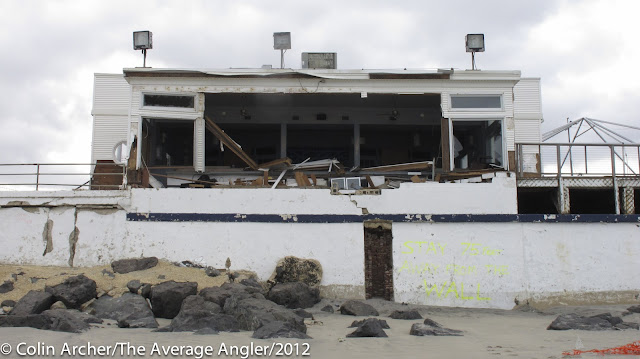 Posted by The Average Angler at 5:10 PM