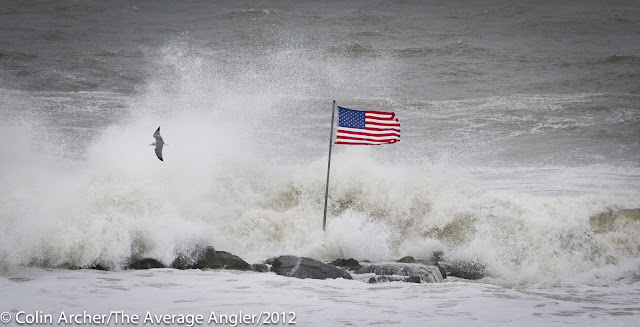 Mother Nature is still angry. Her daughter Athena is visiting us today bringing near freezing temperatures, rain, snow and winds in the 50+ mph range. This will only happer or worsen conditions along the bays, rivers, and along the beaches of the Jersey Shore. The above flag stands in Allenhurst, for now at least, with the image taken about an hour before high tide. The title of this post comes from a Grateful Dead song, one of my favorite encores U.S. Blues, "Wave that flag, wave it wide and high...". I remember a few years ago during Asbury Parks July 4th fireworks on the beach they played it and I was covered in goosebumps watching the boardwalk and people light up with each flash of light. Tonights high tide should be closer when Athena brings her worst to us, and I don't know if this flag will make it through, but another will be up tomorrow I am sure.
This morning I went to scout out beach, boat, and bay access from Leonardo (Middletown) north to Cliffwood Beach (Aberdeen). In Keansburg I found the high water level mark left on a house and car on Seabreeze Avenue, destruction at the Keansburg Boardwalk including the building that housed the carousel. I made my way into Union Beach and Keyport but had a hard time accessing parts near the bay as police and National Guard troops were patrolling and at checkpoints. I did get to West Front Street, Keyport/Amboy Road, Aberdeen to see Browns Point and Wagner's Marina. A lot of baots have been recovered and stood up but several have not and or are in a location making recovery difficult. The marshes and sod banks are littered with boats along the shorelines.
In Loenardo I watched as the fire company pulled their boat so the ramp is operational and that may be a good option to access out front along Sandy Hook as beach fishing their is done for the year, in my opinion, based on the damage reports I have read. While their I found the 9-11 Memorial had fallen over most likely occurring during the surge from Sandy.
And closer to home I stopped at Pullman and found the waves starting to crash along the bulkhead with high tide T minus one hour. In Loch Arbor, where several low lying streets became flooded and covered in sand from the beach along Ocean Place at the beach club, I found crews removing sand from Deal Lake. Initially sand had blocked the flume on the lake side thus prohibiting drainage to relieve flooding along the Loch Arbor, Allenhurst and Asbury Park borders. 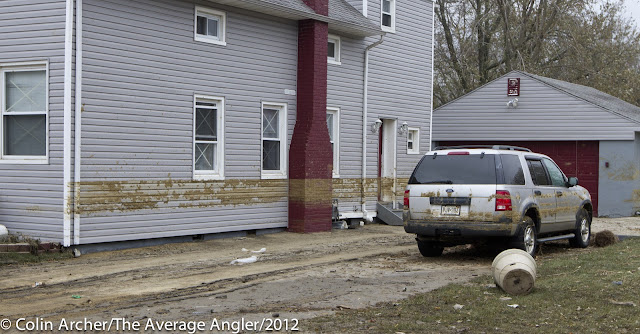 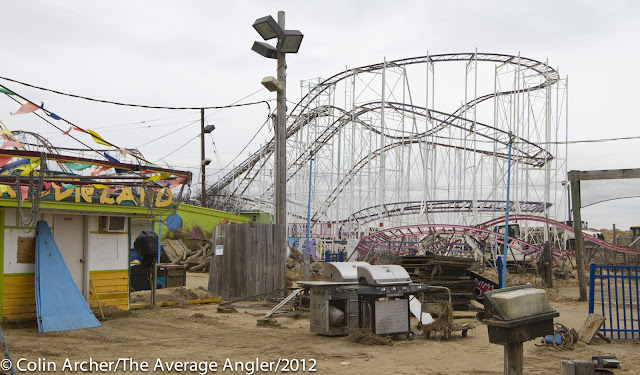 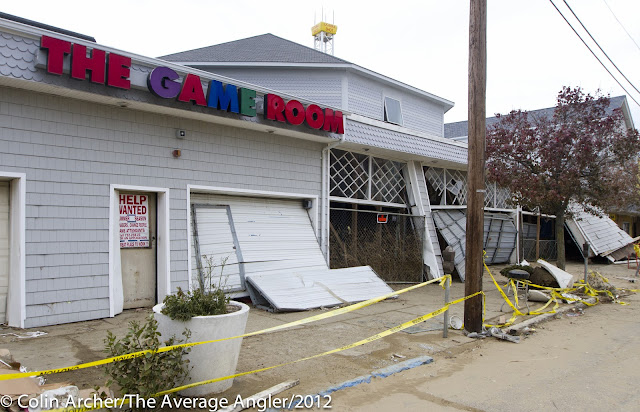 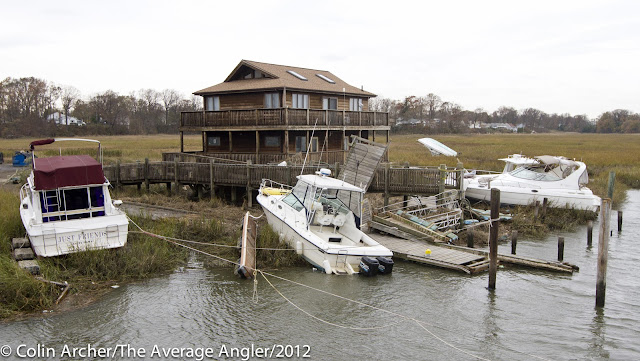 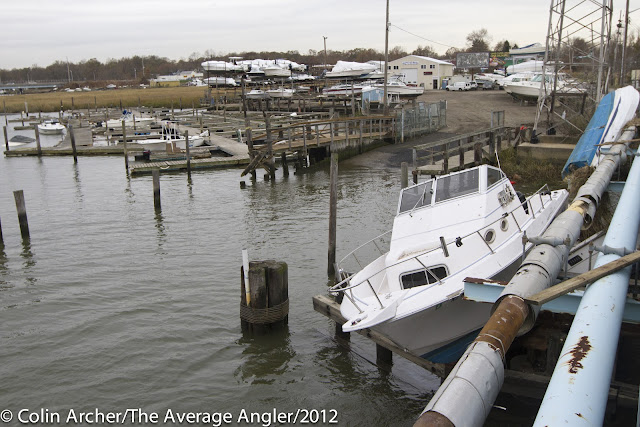 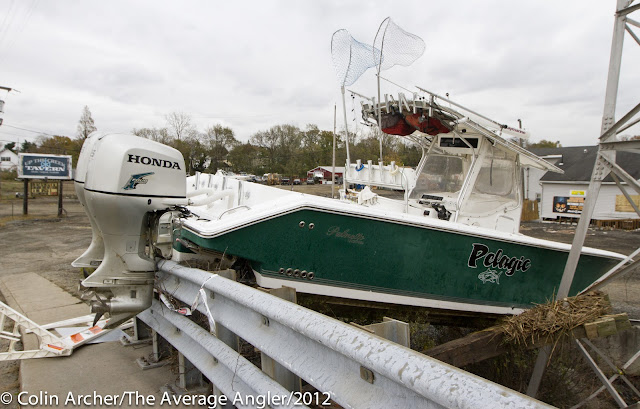 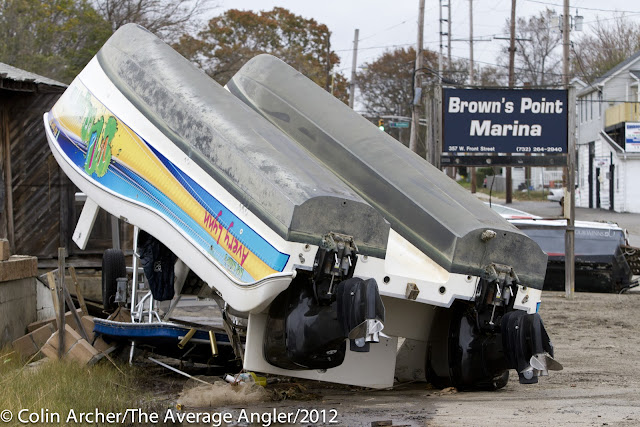 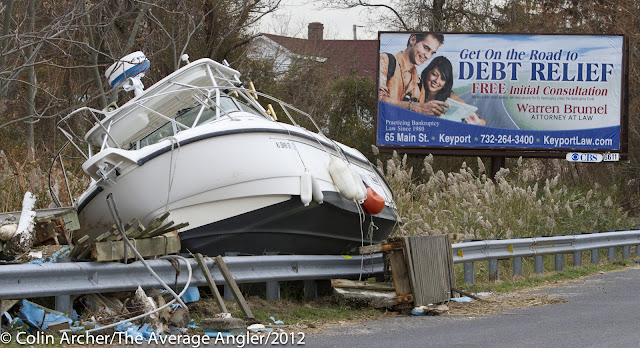 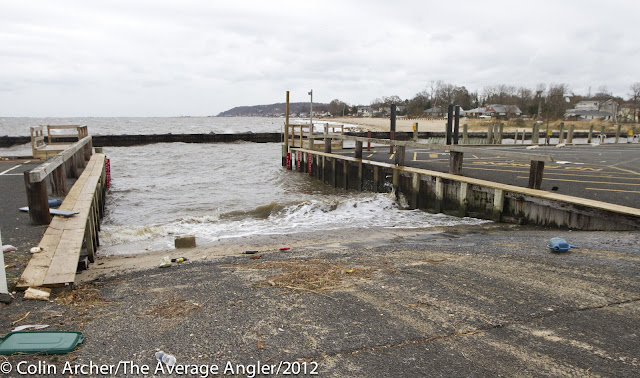 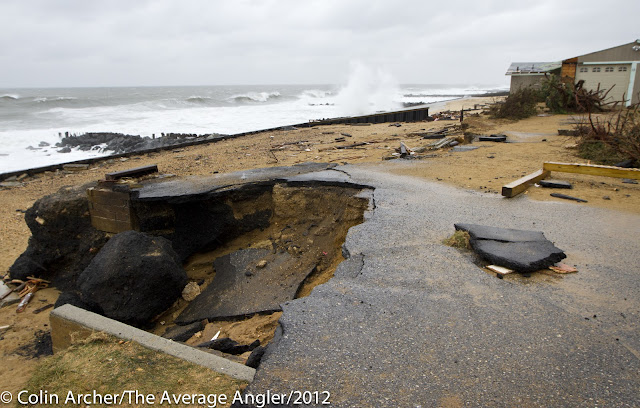 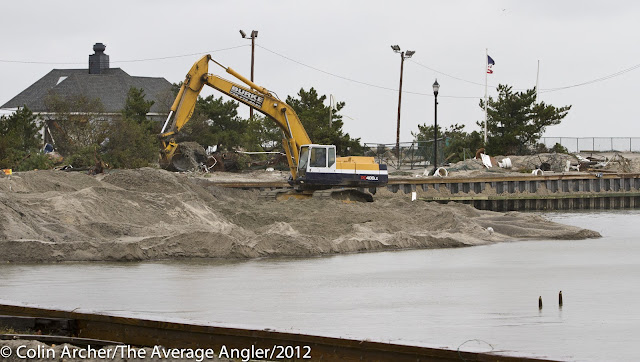 Posted by The Average Angler at 12:42 PM