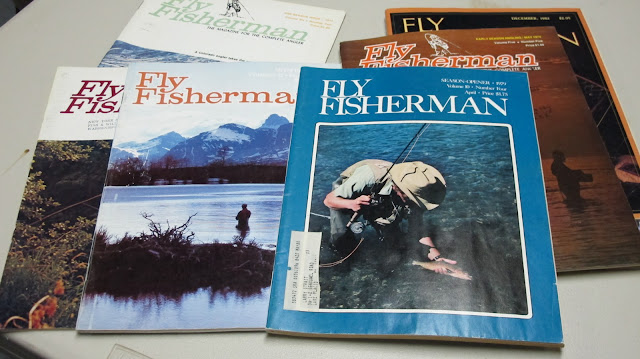 I spent much of today at work in the office. Organizing images and making sure they wound up in the correct hard drives. I was also busy working on the small pile of papers that have invaded my desk. It's basically my to-do list of notes. Check on my Pennsylvania launch permits for the drift and pontoon boat, call the insurance company on the guide insurance, call the auto body shop that will be painting the drift boat, and pitch some story ideas to a few fly fishing magazines. In this day and age and changing "new media" it astounds me on the amount of information that is available for the paying consumer, but really moreso, the non-paying consumer. How many websites, blogs, on line magazines will it take before print magazines and newspapers are out of business? Okay, forget that bitch I have about journalism and the print media today. I know, like the line from Rambo,  "It's over Johnny, it's over!"
But what many people fail to realize is, all these outlets need content to fill their pages. And, it has to be new content. If you look at fly fishing magazines today, I feel they are all pretty much the same. The content sometimes is the same in the exact issue, or it's copied an issue or two later. I swear last year every magazine had a story on fly fishing for golden dorado! Whose doing that? And if it's not there in the magazines, try searching for it on the internet. Just Google a fly, a river, an island, a guide, or a species of fish. You're bound to find several sites where you can go and read or watch a video about it. So when it comes to pitching a story idea as a writer or photographer, it is sometimes hard to get an editor to bite, so to speak. A lot of time the story or images have appeared recently in that magazine, or in a competing magazine, or are currently in an on-line magazine on the web. Stock pictures, there are a million of them. Very rarely, do magazines need to assign a photographer to go and "get" an image. Most times, it's shoot it and then send, and then, we'll let you know, or it's do you have a picture already of so and what?  How many new places are out there to write about or photograph? How many stock images already exist? Are there any new bodies of water being discovered or opening up, one's that the average, say angler, can get to? 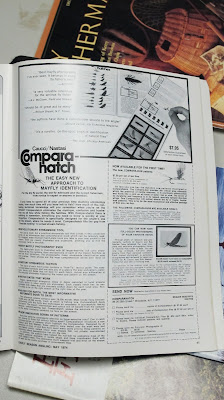 While I sat there and pondered all of this, I decided to bust out a few issues of Fly Fisherman magazine from the 1970's and early 1980's. Aaaaahhhhh. What a treat. By today's standards, low quality, low technology, but so pure and innocent. Untouched and undiscovered locations, even the ones that were relatively close to home. And I love the images. No hero shots, no fish porn, no super saturated Photoshop masterpieces, just old school black and color pictures of regular old, well mostly guys, guys. Most pictures didn't appear sharp, fine by me. Some were underexposed, fine. It was just good to sit there and imagine a guy with an old Nikon F around his neck making those pictures. In addition to the pictures some of my favorite were the ads in the back. I found one in Fly Fisherman from May 1974, "Caucci/Nastasi Compara-hatch. The Easy New Approach to Mayfly Identification" for $7.95. And part of that same ad was for Compara-Dun flies, 10 for $7.50, seventy-five cents a fly, that was almost 40 years ago. Those must have been the golden days. How excited must have anglers been when they got home and found in their mailbox that package postmarked from Woodside, Queens, NY.  Well, actually, don't we have that same excitement in this day and age? Today, flies tied in Africa or Taiwan are nearly the same price, almost forty years later. At the Fly Fishing Show in Somerset I purchased a dozen flies for 10 dollars, that's .83 cents each. See, things are almost the same. Not. 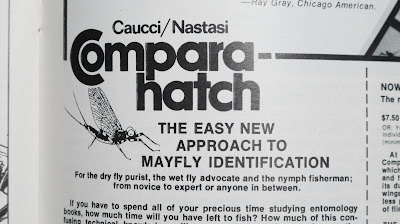 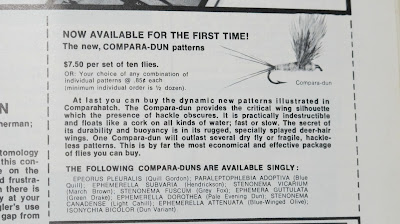