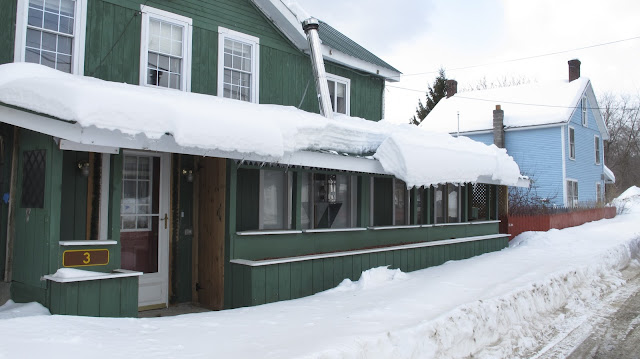 During this past week I got a call from a friend up in Ausable Forks, the town where the lodge and future fly shop is located. She wanted to know if I had anyone taking care or checking up on the houses during the winter. I told her my sister and her boyfriend had stopped by a few days earlier and said everything looked good except for a frozen toilet. She suggested that I take a ride or hire someone to remove the 100 tons of snow that was on all of the roofs of both houses, since a few collapses had occurred in the area. So I took the quick 5-1/2 hour ride up on Saturday and pulled into town at 12 noon. Before I went to the house I stopped at Ward's lumber for one of those roof snow shovels, they guy laughed, his next shipment comes in 8 weeks.  So after I parked in front of the house I got my regular New Jersey snow shovel out of the car and didn't stop shoveling until 5 hours later. It was ridiculous how much snow and ice had accumulated on the roofs. I don't think pictures can do it justice. Not only was there a ton or 100 of snow and ice, but the green house has a metal roof. Do you know how hard it is to walk on a metal roof with snow and ice on it, all the while trying to shovel it? During the afternoon several locals would stop and watch as I tried to get my footing on a screw head that keeps the metal roof in place. Or they would watch as my pants would get pulled down as I tried to get in and out of one of the windows. The best viewing was from the Stewart's nearly across the street, I swear three guys just stood and watched me for an hour. I did my best, always wondering if the next, or next to last shovel full would carry me down to the street or the yard below. The worst part was shoveling the river side of the house, that fall would be about 40 feet to the ice shelf or directly into the West Branch. If you look at some of the before and afters pics you can see how much snow is now on the ground that came off the roofs. It is a blessing that nothing collapsed. I only did the lodge and left the future fly shop to fend for itself, the pitch is a little better there. I also had to fix the wood stove vent, as it fell over from the snow load.
Just when I got done, it started to blizzard. I thought about just grabbing a slice in town, but I decided to treat myself so I took the treacherous trip to Wilmington to eat at the R.F. McDougall's Pub at The Hungry Trout. I took along the book Selective Trout, by Swisher and Richards, and had a great meal. I met a young couple who was up skiing and we had some talk and a drink. By the time I was done and left the snow had stopped. I spent the night in the lodge and watched a few movies, Casualties of War and Walk the Line and fell asleep before the second one was over. On Sunday I got up and checked all the thermostats and locked up and headed back to New Jersey. 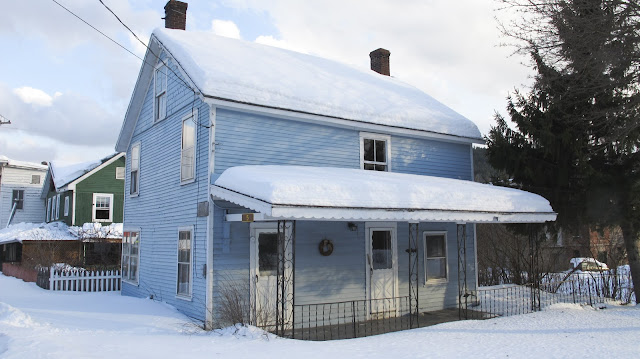 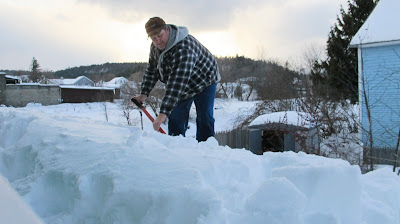 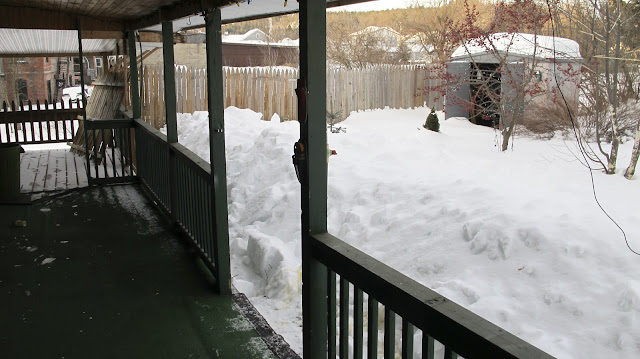 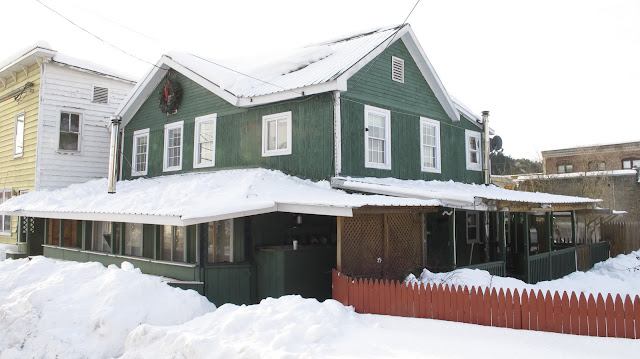 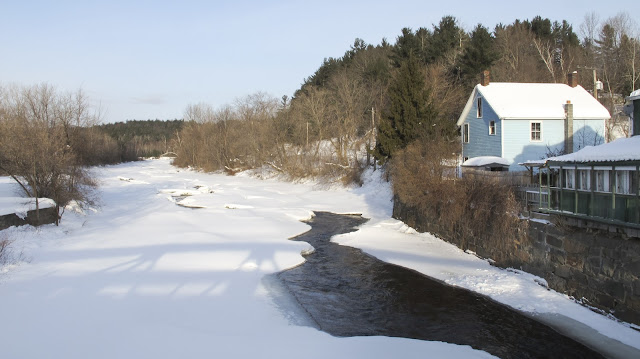 Posted by The Average Angler at 3:41 PM