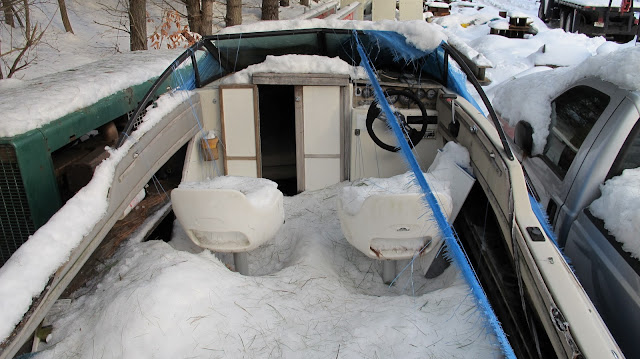 So I have this boat. I am sure many of you have a boat too. I bought this boat in 2004 when I was going through the early stages of a divorce. I was getting called back to, well just to, the sea. I thought it would be a great idea. Me and the boys enjoying the boat. That summer I put it in the water and got a slip at Tradewinds Marina on the Shrewsbury River. Tough place for a new boat operator. Wind blows E/W, tide goes N/S, and somewhere in between the two, you have to get your boat in between two expensive other boats. Needless to say I had it there one summer. Probably took it out 6 times. Then I had it winterized, in the winter of 2004. And that had been it, except for a few washes and tire checks.
It has called home my fathers construction yard. It has spent four seasons times 7 years there. Sometimes under a tarp, but not this winter. Today I decided to go and check on my boat. It was there, but the tarp wasn't. I knew I should have bought a cover years ago. I started by shoveling the snow out, then chopping the ice. Lucky for me there was an inch or two of pine needles, which kind insulated the fiberglass boat from the ice. I also had to remove the snow and chip the ice off the motor. Lastly, I had to bail out the frozen water that was in the bottom of the boat. I went to Home Depot and got a new tarp and new bungee cords and made sure she was weathertight for the remainder of this winter. Because, this year, I will be fly fishing for stripers from her in the Raritan Bay or along the beaches. Or, maybe not. 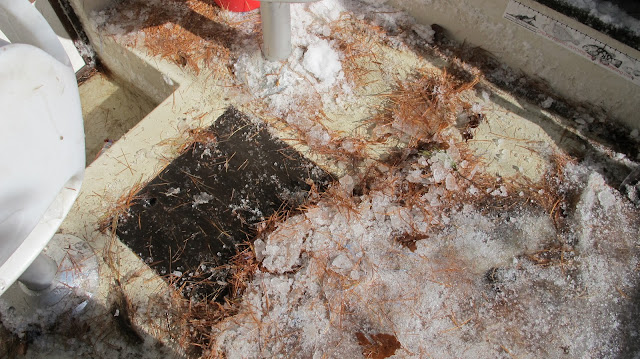 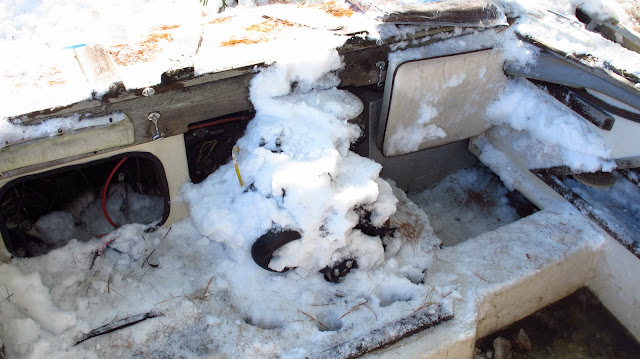 Posted by The Average Angler at 4:02 PM