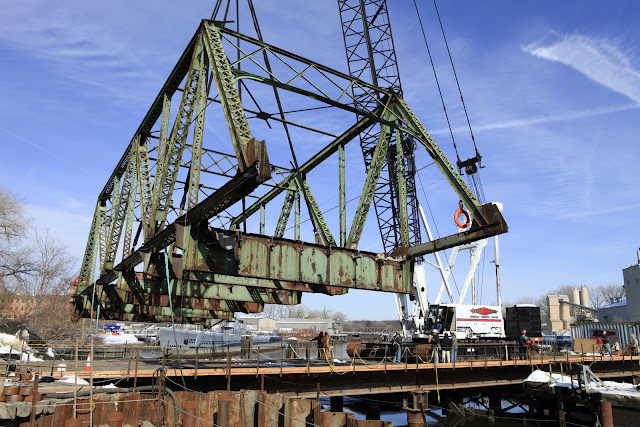 Today I had an assignment in Hackensack over the Hackensack River. My father's company was removing the old Court Street Bridge so it can be rehabilitated and then erected back in place. It's the only truss swing bridge still around in New Jersey. It was opened in 1908, and hasn't been "swung" in nearly 60 years. There was talk of putting a new bridge in its place, but it is a navigable waterway, for another 1/8 of a mile, so the DEP and Coast Guard said it has to be a swing bridge. So instead of say 5-7 million dollars for a fixed span bridge, the 20 million dollar project was approved and is underway.  In the rear of the frame you can just see an old U.S. Navy submarine, the USS Ling, that is on display at the New Jersey Naval Museum. The picture above is only half of the bridge, the other half comes out Thursday, weather permitting.
While waiting for the bridge to be lifted, I spoke with some onlookers about fish in that section of the "Hacky" as its known. I got a mixed reaction from some locals on the river, from nothing to nothing but carp, to a recent comeback of a herring and striper run in the spring in the lower section of the river. The 45 mile river starts in Rockland County, New York and empties into the Newark Bay. It was once known as one of the most polluted rivers in the United States. Recently much work has been done on the tidal estuary waters in the area of the Meadowlands. The Hackensack Riverkeeper group, HERE, is continuously working to improve this vast and important waterway in New Jersey. With things looking up on the Hackensack, and dams being removed on the lower Raritan River, what will they say next, wild trout in the Passaic River in Paterson? Don't laugh, that story will be coming soon to a fly fishing magazine near you.
Posted by The Average Angler at 8:56 PM