01.11.11 Waiting for another round of big snow, and the big man to sign the saltwater registry bill 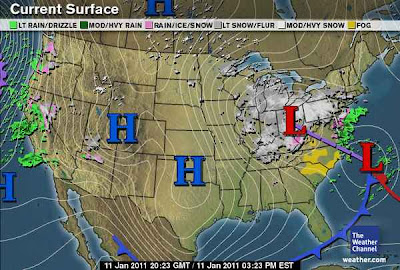 Here's The Weather Channel map showing where the storm is located. The New Jersey shore could possible get 6- 12 inches, and northern New Jersey, New York, and Connecticut even more. It wouldn't be so bad if we didn't still have what is left of the two feet we got a little over two weeks ago. 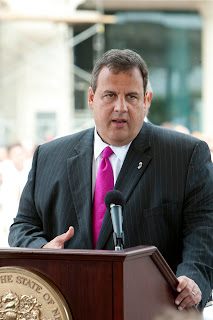 Photo Colin Archer/Agency New Jersey
In fishing news. New Jersey anglers are waiting to see if and when Governor Chris Christie will sign A-823/S-1122, which would allow New Jersey to establish a free saltwater fishing registry. Signing of this law will allow New Jersey residents to fish in saltwater without having to pay $ 15.00. This is all part of the Magnuson-Stevens Fishery Conservation and Management Act in 2007. Which allowed NOAA to start a registry, and then Congress later authorized them to charge for it. However, New Jersey was allowed to avoid the fee and create its own registry and be exempt from the federal fee. It cleared the Senate and the Assembly and went to the Governor's desk where it sits waiting to be signed.  (Abbreviated from NJ.com staff reports)
Posted by The Average Angler at 4:17 PM