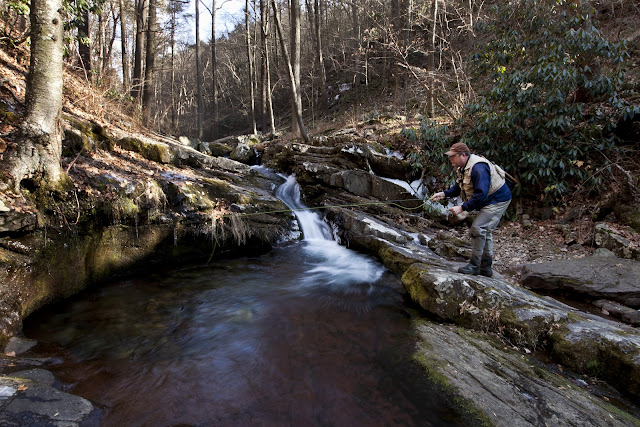 So yesterday I took a day trip up to the Delaware Water Gap and hit Dunnfield Creek and then the Big Flatbrook. I left Ocean around 9 and hit the Gap by 11. My primary goal was to really open up my newer Canon 5d Mark II and Canon 7d cameras and put the video functions to the test. I was a one man show so I had to be the photographer/angler/actor, which isn't easy. The first thing I noticed when driving up was the lack of snow up north. Hopefully there'll be enough runoff in northern NJ, PA and NY to get the rivers and streams off to a good start in the spring. I first stopped at Dunkirk Creek and set up the video cameras and shot for a while for a little quick piece I'll produce in the next few days. Then it was off to the Flatbrook where I had the whole 32 degree river to myself. I shot some more video and stills and made a  few casts here and there with no takers. I was done by about 430 but on the way back down Route 15 I saw a bridge I used to fish under about 20 years ago. The bridge I believe is in Lafayette where Route 15 and Ice Plant Road cross. I parked my truck in a parking lot and headed down beneath the bridge. I had tied on one of Rich Garfield's "Sirloins" and made some casts into nice deep holding water. On my fifth cast I hooked into a nice big rainbow and it spit the barbless hook on the surface. It was nice to have a first trout on in 2011.

On the way home I stopped for the first time into Andrew Moy's Tight Lines Fly Fishing Shop on Route 46 in Pine Brook. You gotta just love fly shops that are still around. TL is a full service shop selling everything from Simms waders, to Sage rods, tons of fly lines and all the fly tying materials you could want. Also if you're a spey, switch, two handed or anything other than a one handed traditional caster, Tight Lines should be a must stop. You can see more of the shop and Andrew's sick spey casting ability HERE. 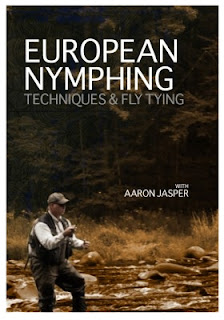 Of course while at the shop I picked up a few things. Yes, owners love visitors, but they really love customers. So I picked up a few articulated streamers, similar to Tim Skoraszewski's "Chain Reaction". I also picked up Aaron Jasper's new "European Nymphing- Technigues and Tying video. I remember seeing his trailer for it at the Fly Tying Symposium in Somerset last fall, it was done really well and the video is super too. Aaron discusses and demonstrates all you need to know in order to present flies to fish that you've been passing over for years. The best part of this technique is, that you can add to your own aresenal, and if the conditions call for this style, you can easily switch over to it. You can purchase a copy of it at www.europeannymphing.com.

Posted by The Average Angler at 4:05 PM