10.24.10 Search for flies down south and catching up with Bob Popovics 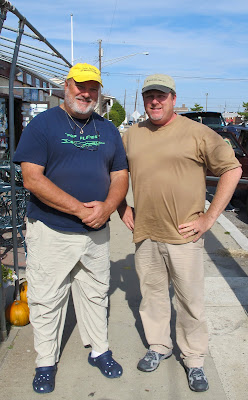 So my oldest girl had a football game to cheer at in Toms River this afternoon so I though it would be a nice idea to sneak down (she has to be at the game an hour early)to the beach with Cindy and take a romantic walk, ie- see what was going on. So I headed down to Betty and Nicks in Seaside Park to see if they had any good flies. When I got there Bob Popovics had just stocked the shelves with some he had tied. I grabbed some clousers, and decievers, and some half and halfs, and a few big bunker flies. On my way out I met up with him and asked about the bite down south, it's the same thing we're going through up north, just waiting, any day. I did buy one of his flies called, Bob's Banger, a popper that hopefully gets taken by a striper, and not shredded by a big bluefish. I'll be going out tomorrow, with an interesting set up, wait till you see it. 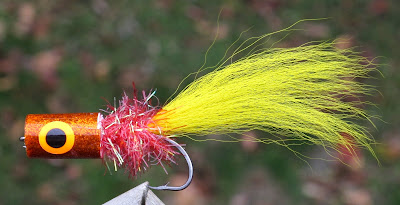 Posted by The Average Angler at 8:46 PM