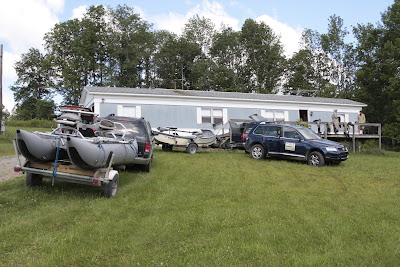 Just getting around to blogging on days 5 and 6 of the guide school. Wednesday morning we were all up and out by 730 for the over 2 hour drive to Equinunk Pennsylvania were we would staying for the next two days. Joe DeMarkis' mentor Lee Hartman has a nice house up there and we dropped our stuff of and took the boats up to Hale Eddy for the Hale Eddy to Balls Eddy float. Brian and I were with Tim in an inflatable pontoon boat and the other group was in a Hyde. It was a good day when it was my time to row and working on positioning the boat to rising fish. We stopped at pools above the West Branch Anglers and made a few casts to sporatic risers. We also set up for lunch on the small island there. After lunch we got into some 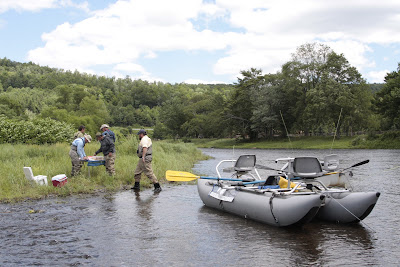 fish below the cabins and above the Upper Gamelands. We made our way down river fished the Lower Gamelands and caught a good sulfur hatch just before dark, Tim had a good fish on that tossed the hook right at the boat. We boated throught the Mud Flats after dark and took out at Balls Eddy in darkness. By the time nightfall hit the temperatures were in the lower 50's and we were all a little tired and cold. We got back to Lee's place at 11 pm and Joe fired up dinner. It was a really good day for me to be able to float and row the West Branch. I am getting more comfortable with the idea of guiding on the West Branch every time I'm on it.
Todays is our last day of the school. We slept in late today waking up around 8am. Today Joe handed out the certificates that I talked about and broke chops about all week. Don't you know after all of that, he forgot mine. It was a another funny thing in a week of non stop laughter. After some breakfast and packing the lunches and packing up we headed out for the Balls Eddy to Stockport float. It has been cold these last few nights and the lower West Branch and Upper 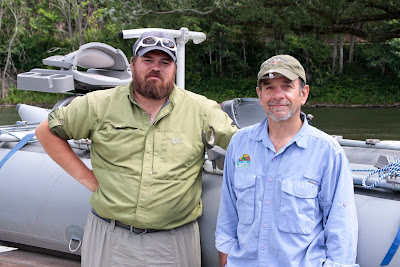 Main Stem have cooled down making fishing possible again. Today Brian and I had Joe in the Hyde for the day. I took the oars first and rowed down to the first riffs were we fished nymphs through with only a bump to show for it. The water was skinny through a lot of the day and we had to get out and guide the boat through the shallow riffs. I caught one and missed one in the riffs above Caucci's Campground but it was slow before and after lunch when we stopped at Caucci's Pool and watched some rainbows splashy rise to some caddis emergers. After lunch Tim made some super long casts in strong wind to pick one up. Brian took the oars and took us through the Church Pool and to the top of the Hale Eddy riffs when Joe took over and put on a clinic going through in super skinny water with barely a rub or two on the rocks. It continued to be a slow fishing day but we had a blast and I got more good rowing and prospecting in. At the Junction Pool the other boat got out to fish and John had a good fish on for a minute before he got off. As we approached the next riffs a drift boat was set up throwing nymphs and as we 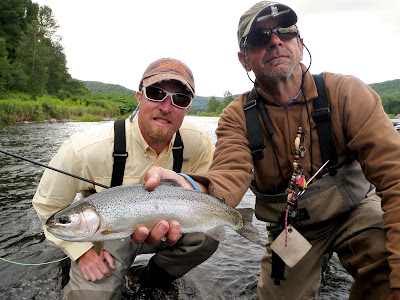 got close they pulled anchor and moved on, I think top get the first shot at the water below. At the top Brian layed into a nice strong rainbow that took his hares ear. There was still no action on the top so we just cruised and laughed while Joe took us down river. That was until we got to Lake Lenore. There were a few cahills, vitreous, and olives on the water and fish were rising to them here and there. Good rises made by good fish. I stuck the water there to see what the temperature was, 64 degrees. I told Joe when I saw a fish that was making more than one rise and got me to within 60 feet. He had given me an isonychia dry that he coated with some super floatant concoction that Tim had made. One cast within two feet and the rainbow nailed 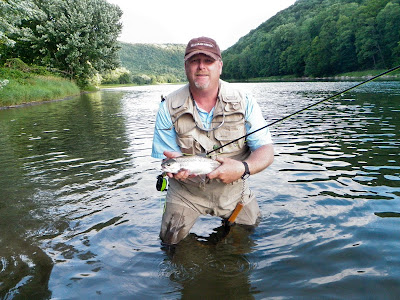 it. He made a strong run and soon my fly line was out, followed by my backing. I saw the end approaching and asked Joe to row in the fishes direction. We made our way to shore and soon had the 16 inch bow in the net. After a quick hook out and picture he was the water and swam away. The next fish was even better. A few quick rises withing striking range with the the 5wt and I put it right one top of him and wham- another strong rainbow about 14 inches. Brian gave the next fish a shot but he was a one and done riser. As we move into the Stockport take out area I saw a great rise. I told Joe to drop anchor and made a good cast and did the countdown as the fly approached a seam to the outside of a rock in fast water. 3, 2, 1 boom! The fish hit hard and was strong in the fast water. I thought maybe we could net it from the boat and as it got close we could see the pod was swimming with the fish, it was a healthy, vibrant shad. And that ended the fishing day. At the launch we said out good byes and Brian took Joe and Tim to get the trailers at Balls Eddy and the other guys headed home to Erie, PA. When the guys got back we loaded up the trailers and we were all on our way. It was a great school. Had a ton of fun. Learned a lot and got plenty of time behind the oars on three different rivers. I definitely feel more confident after this long week. 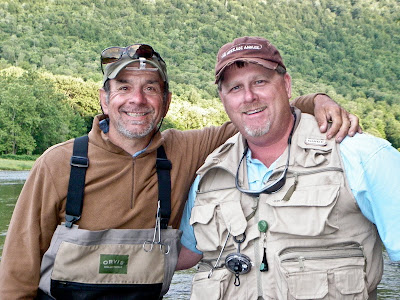 Posted by The Average Angler at 10:11 AM