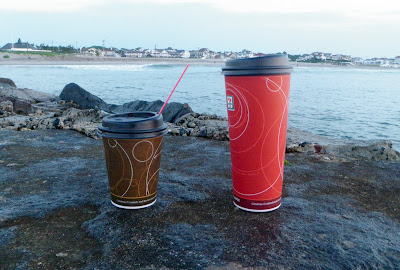 Alright, break out the fly rods. Yesterday I said to my new fishing buddy, "Wanna go fishing tomorrow?". I got an excited "Sure" in response and had Sean check the tide chart. Todays high tide was around 430 am so I figured we'll wake up at 5 and get there before camp drop offs, work, and my 11 am MRI of the brain appointment. So after a quick stop at 7-11 for some hot chocolate and coffee we got down to the jetty and fishing by 530, and 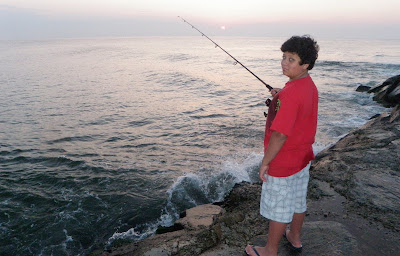 by 610 he was done. There was a few guys striper fishing in the surf, and no one on the jetty but us. You know what that's like, you're either a genius or a fool by being there. Well it's always easier for kids to think their dads a fool. And without a bite, today I was a fool. To change things up I had Sean cast some big rapalas hoping he would get into a striper or bluefish, that didn't work. Now I was a bigger fool. However, all was not lost. We caught (found) " Tell the gang I caught it", a small shark that someone had caught overnight and left on the jetty? Why would they do that? Is it that much of a menace? Anyway we took some shots and took it home to show the girls. I tried the, "That's why they call it fishing and not catching speal", and that got me a, "Yeah, yeah." So next time it's korkers and fly rods and risking our lives to get out to the end of the jetty to reach some fish that may be stalking the rocks! Kidding, at least we found the shark. 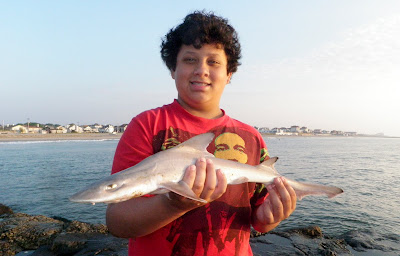 I'm no camera or techno guru, far from it, but one last thing. The 10 megapixel Olympus Stylus Tough is about the worst point and shoot I have seen. It looks okay if you want pictures that are no bigger than the size above. Soft, grainy aka noisy, ect. I like the waterproof option and underwater and all, but never use it. It's good to document an outing for the blog, but if you want quality and to see it any bigger, you're out of luck.
Posted by The Average Angler at 7:23 AM