07.09.10 Shooting for Catch Magazine on the Saranac River 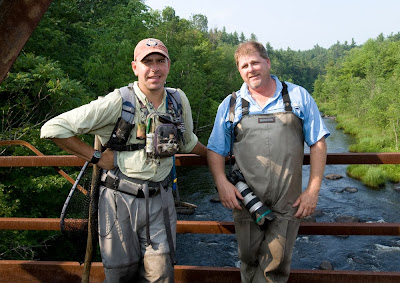 Today I had the pleasure of meeting and working with Richard Garfield, fly fishing guide and owner of Fly Fish the Adirondacks (www.flyfishtheadirondacks.com), who helped me out with my shoot for Tom Moen and Brian O'Keefe's - Catch Magazine (www.catchmagazine.net). My spread will be in the first 2011 issue and will focus on the fisheries that I am familiar with here in the tri-state area. Last night we got pounded with rain in Ausable Forks so at first light I was back where the fish kill was yesterday. The West Branch of the Ausable was up about 6 inches, but the temps were still high, two degrees off yesterday at 74. Then I met up with Rich at 730 on the Saranac River on the border of Saranac and Redford on Route 3 for a cool shoot near an old car bridge that crosses the river. Rich was game for anything and quickly he was in the river positioning himself in the nice early light and making some great casts to capture. I shot him 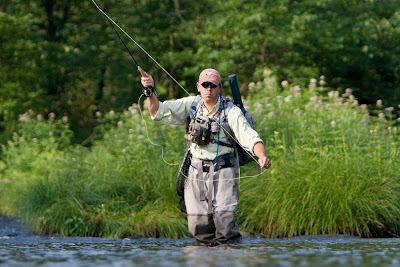 from three different locations and was really happy with the images, even though I looked at them and did a quick edit on my 6 year old Powerbook whose screen is almost gray because it's been on for about a million hours. We were done in about an hour and a half and soon I was back in the Forks for breakfast. While I was reading the paper overlooking the West Branch I spotted a newly hatched isonychia bicolor dun that had just hatched. It's a shame the rivers are so low and hot, and unfishable at this time. I did stop into the Jones Outfitters in Lake Placed for a super fast sink tip to use on Saturday when I take a trek in the woods to a hidden pond that crystal clear, 60 foot deep, 45 degrees, and holds brook and lake trout! 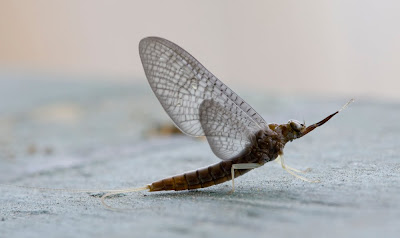 I shot this iso with and without my ringlight set up. When I get home I will do a little blog  on shooting bugs with the macro setup with lights and without.
Posted by The Average Angler at 6:58 PM