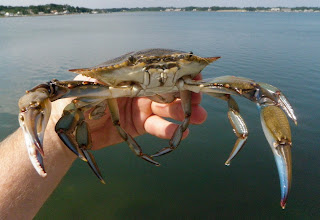 Today Ryan, Sean, and I spent the afternoon crabbing in the Shark River Inlet. We had a blast, even though we only caught two keeper (over 4-1/2) inch crabs. 80 bucks to get rigged up, 2 crabs, that's 40 bucks apiece. Can't complain, I needed to get myself new nets and drop lines and a set of crab tongs, and something else I can't remember. But, later on Sean and I had to drop off Ryan so he could run the streets of Red Bank with his friends, so we hit the Navesink River at Marine Park, and, we brought our A game. This time we caught about 50 and kept about two dozen. By the time we got home Sean was dead alseep so Ryan and I cooked them up, old school style. Big pot, some water and vinegar, a box of Old Bay Seasoning, and we were off. Looks like we'll be picking through them tomorrow. 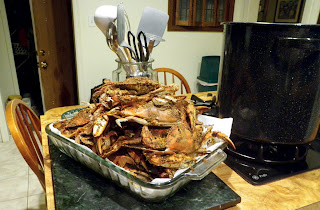 Fly fishing? What's that. Soon the blues will be around, then the stripers. I will be in PA the second week of August so I'll be back to one of my favorites, the Lackawanna. Then after I get back I'll be heading up to Roscoe for a few days, and then the Adirondacks in September, and then it's fall in the Catskills.
I'll be running fall trips on the Upper West Branch, single client trips down the river in the pontoon boat, or two client walk and wade trips. Give me a call to reserve a day-732.261.7291
Posted by The Average Angler at 11:58 PM