07.08.10 LARGE fish kill on the Ausable due to thermal stress 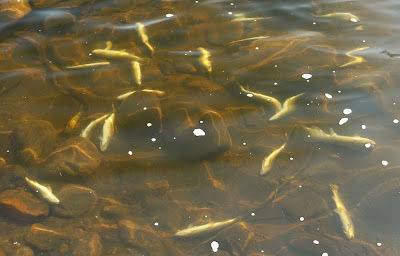 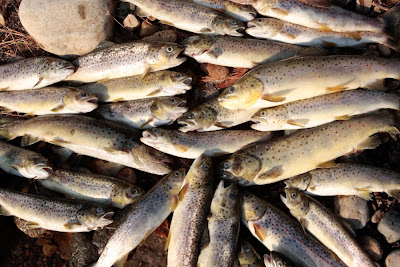 Woke up this morning around 6am and took a walk down to the river where the West Branch of the Ausable meets the East Branch. I first saw a dead trout on the river bottom and thought it might have been dead after a bad release or thermally stressed from the high temps as of late. Then I saw another, and another, and then it was twenty, thirty, forty, I stopped counting 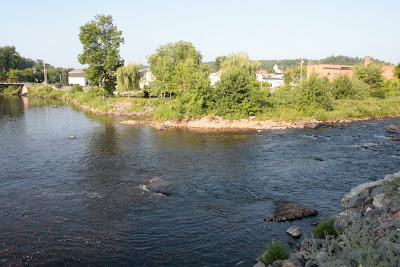 at fifty. Some of these fish were fingerlings, others a few pounds up to 19 inches. These fish seek refuge from the lower East Branch and Upper Mainstem of the Ausable in the large pool where the West Branch empties into. This morning, the temps in the fast riffles leading into that pool were 76 degrees. I also saw fish trying to swim through the warm water, obviously stressed and delirious. It was a sad sight. I drove up river a few miles and found no dead trout. Last night I saw seven guys fishing below the falls at Lake Everest. One guy caught a fish, fought in, took some pictures of it, passed it onto his wife, and then released it. Only to try and revive it for 15 minutes. I saw as he pointed the trout in the direction of the falls and push it back in to the deeper water. Surely that fish will become a raccoon snack. During these times it is so 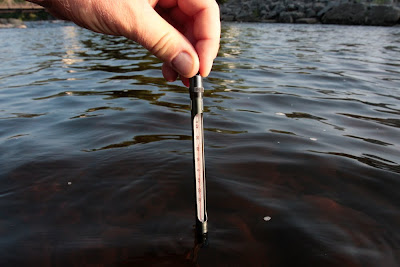 important to either cancel trips and just not fish, or find some deep lake or cold tailwater if you must. Carrying, and continually monitoring the water temps is crucial if you are going to fish. Things got really warm, and remain so on the Catskill streams, and that crisis is here and strong in the Adirondacks. I write this blog this morning from a bakery chain in Plattsburgh where I am able to get a wi-fi signal. Me and the Queen are off to Burlington for some shopping, looks like fishing is off the schedule for the next week.
Posted by The Average Angler at 9:49 AM