07.10.10 Putting in a new dock and fishing a remote Adirondack pond 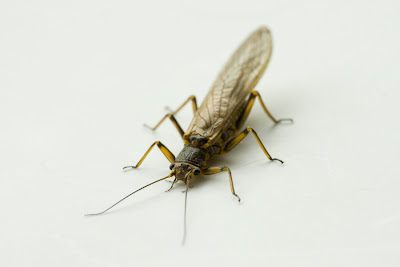 Spent late last night photographing a small army of bugs, including a big hex (hexagenia limbata) that I found in a spiders web in Wilmington while out for some late night ice cream. This morning I finished the photo session with this stonefly and some cahills and olives that I found. Then it was off to Oceeta Lake to help my sister and her man put in an 80 foot dock at their property. The dock installation went well until I lost my footing and landed square on one of the dock supports, looking kind of like a male gymnast falling on a 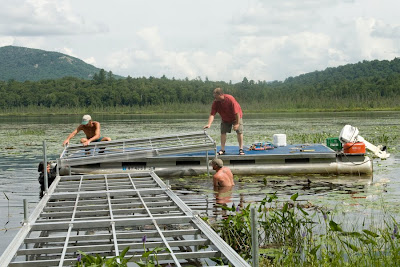 balance beam! Ouch. After that I headed over to a remote deep woods pond for a shot at some brook trout, and if I could get it down to the 60 foot depths, a lake trout. Eric came along and we had to put the canoe on wheels to wheel it what seemed a half a mile to get to the pond.
I added a super fast sink tip and a 3x tippet and first tied on a cone head black wooly bugger and then a double bunny. I rowed the canoe around slowly trolling in about 30 feet of water with no luck. I did see a rise here and there, and did see some big hexes coming off the water. At around 6 o'clock the rest of the gang called me, glad I didn't get an iphone, and said they were going to eat and they would either pick me up then or later. I'm just not a from-the-boat-pond-or-lake guy, so I put the wheels on the canoe and started out. I went about 10 feet before they fell off. Luckily Eric came to check on me and gave me a hand getting back to the big lake. 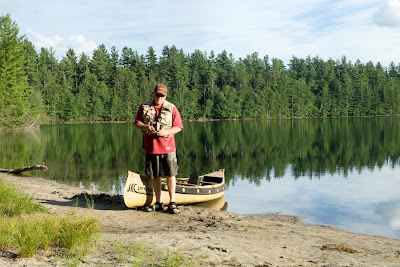 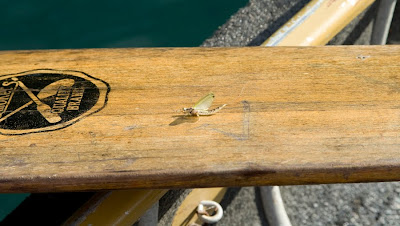 Off to Montreal in the morning!
Posted by The Average Angler at 7:18 PM