So after hearing about good fishing the first light the day before, I decided to get out there nice and early today. I was on the tip of the jetty at 330 am blind casting a big peanut bunker fly. There was another guy out there but he gave in about an hour later. My brother was in Deal and we played phone tag telling each other nothing was going on. By 5 am things had 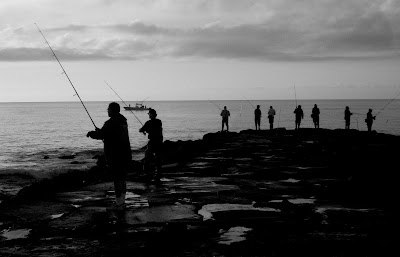 brightened up and I waited for the other anglers and fish to come. The fishermen did, the fish didn't. Huge schools of bunker stayed off the jetty and out of reach of the guys so by 7am we decided to call it an early morning. It's going to be good here in the next few days...thing is you just don't know when.

Posted by The Average Angler at 7:30 AM