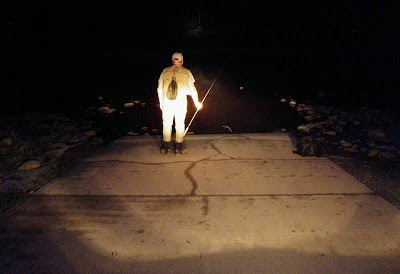 So I went back to Buckingham at 430 am to catch the coffin fly fall that was surely going to happen...nope. I took the temp of the water and it was a warm 66 degrees. I waited and watched till 530 and then headed up to Deposit. By the time I got to the no-kill another guy was just just below the Route 17 bridge casting to fish sipping midges. I moved into my favorite spot and proceeded to burn out my rotator cuff casting nymphs in the riffs. I didn't get a bump, but the water was a nice 46 degrees, and running just over 450 cfs. There was a ton of algae in the water and almost every other cast covered my fly in think green slimy film. My purpose for coming up today was to meet up with the guys from teh Jersey Shore Trout Unlimited chapter on the Beaver Kill. This was our annual outing and they were staying in Roscoe. The only problem was the Beaver Kill was boiling over, and the West Branch is the only game in town. Not knowing the guys numbers, I drove down to Butternut Grove campground looking to point them up in this direction. When I got there I saw Bob Cohen, from Project Healing Waters, and he told me they all headed up to the West Branch. So back up Route 17 I went, and back to Laurel Hill, where I was surprised to find few guys in that stretch. I waited and waited for the sulfurs to start, and around 230 they did. The fish came up and stayed on top till around 730 when I finally left the water. Sulfurs, march browns, cahills and a few caddis. Landed about a dozen fish, mostly browns, a few rainbows, and a brook trout. The biggest one topped out at 16 inches, and the smallest 4. I casted to one big fish for 2 and half hours, had him take a sulfur cdc dun, only to miss the strike due to slack line. Then towards the end I found a slob taking duns and spinners across three different current seams on the opposite bank. In the end I had to tip my hat and head back home to New Jersey around 8 pm.
Posted by The Average Angler at 5:06 PM