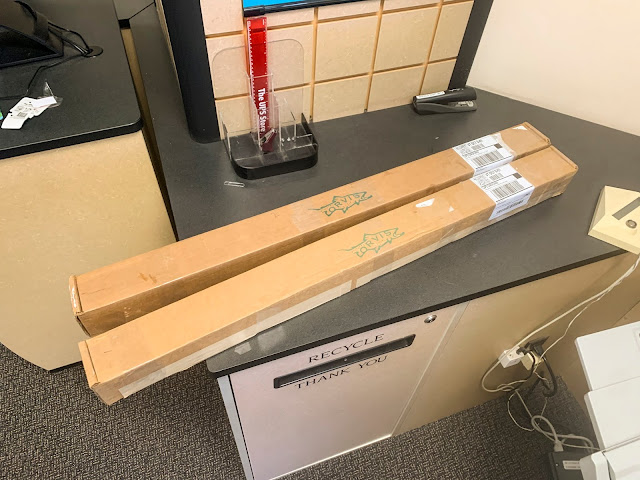 So now that I'm back to boat fishing, well hopefully, I went through my gear and found what needed to be cleaned up or repaired. I found these two rods, a 9 ft 10 wt and 9ft 12wt, both snapped during an outing with 30, 40 and 50 pound bass eating big flies a few years ago. Hopefully they'll be back in time for some action this late fall.
So let's be real. Outside of a few big fish caught on IBSP the last few days the beaches along the Jersey Shore suck for surf fishing. Doesn't matter if your throwing flies, plugs, ducktails, chunks or whatever else you have in your arsenal, the fact is it isn't the same anymore. It may just be a convenient time to bitch see most aren't catching these days, but its the truth. I'm not talking about getting one, or a few, but being on the fish. For those that fish tides, and moons, and weather conditions, you know what I mean. Yes, you can fish the same exact spot 1,000 time, and sometimes, or even often, you just might be in the right spot at the right time. Its kinda like being anchored up on a wreck for hours and hitting the mother lode of fish swimming below.
Why do I say that? Because I get it. Those that charter for a living, I mean living as in no other job, or those that side hustle, like myself, need to show pictures of people with fish in order to get people to fish. Now, outside of social media where displays of catches and happy anglers are getting a bit much, captains and businesses that have committed to publishing reports have to do just that, good, bad, or indifferent. Yep, sometimes you just have to say "The fishing sucked". That's why I like The Average Angler blog. Its the truth all of the time. I don't know the actual statistics, but failure is more often reported than success, or what people would identify as success, which would be catching. What is success when it comes to fly fishing? An experience, of being outdoors, learning things, trying new things, and then just maybe actually catching a fish.
Some guys are dialed in and will use every method available to get you into fish. The cell phone network, flies, plugs, shads, livies, eels, you get it- those are mostly the fly and light tackle guides, good for them and good for you if that what you like. For those die hard fly anglers, you know catching comes second to fishing. If you look at the posts, if you do that, just about everyone is reporting and displaying pictures of people with fish, it was that good. But what about the pictures when you don't catch, the reality of paying for a charter and not catching, why is that reported as proudly as when you catch, it is for me, and like minded clients, fishing is always better than catching. 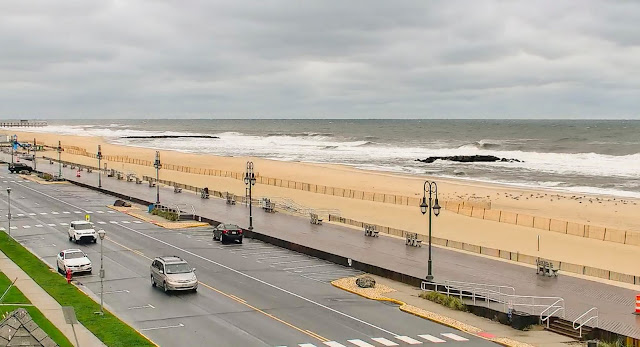 So this blow has slowed the boat slaughter that was happening and bound to continue. Hopefully those fish are way south and over the three mile line. That way they get some chance to spawn next year. Above is a view of Belmar now at 130 pm at low tide. No doubt the beaches will have changed a bit, hopefully enough for some bait to get caught in close and bass not freaked out by the new nd continued changing structure, or structure less Jersey Shore.
Posted by The Average Angler at 2:03 PM