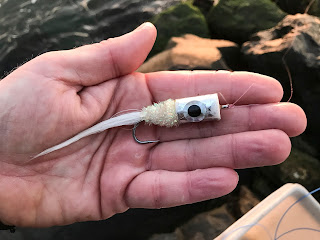 Ok, I suck. Up at 1, then 2, then left at 330 am. First cast, well first 1,000 casts, was with the Bob's Banger along one good stretch of beach and two groins. Didn't move a fish. Then went underneath and it was the same result. Beautiful morning as evidenced by Leif's photo below. Had one time period where I thought something might happen. Saw a fish break within fly rod distance off the beach. Shortly thereafter an osprey came, hovered, dove and came up with a larger swimmy bait. Thinking it might have been a bunker, but aren't seen any evidence of them in close.

I switched up the fly and went at that stretch for a while without a tap. Hit both rocks again and figured it was just one of those mornings. I texted Leif and Joe joking about the lack of action and they both responded with fish pics. Leif got a few using a white Clouser in the trough and Joe has shifted to summer mode and is thinking like a bass, and a fluke.

Joe has been busy at the vice getting his crab flies and poppers in order. The crab flies, kind of a mole crab imitation, have been produced for him with bass and fluke taking them. Today he was on the fluke. I'm thinking those crabs might be nice for the Vineyard this week. Gonna lay off the beach and concentrate on work, school, and time at the vice before Thursday nights departure.

Posted by The Average Angler at 10:10 AM