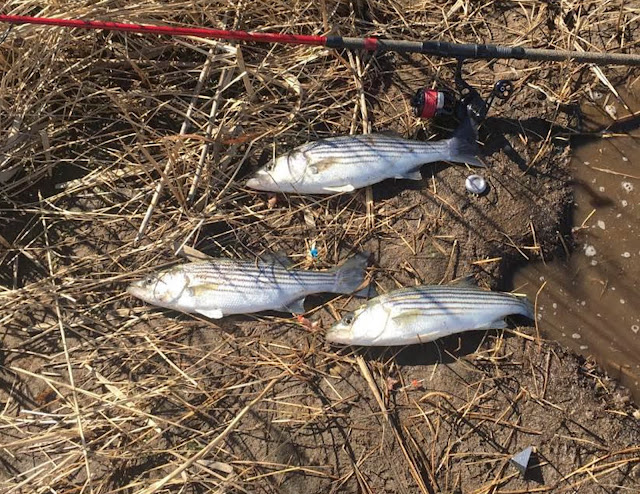 It's almost spring, well it officially started on Monday, and anglers are chomping at the bit. We're all waiting for winter to leave and things to get heated up. Most importantly the water temps. Warmer temps will get those migrating fish moving and the ones that stuck around more active. Warm water temps in the Delaware River will bring the big females and the horny smaller males up beyond the salt line looking to spawn. Hopefully the conservation movement has spread to the river fisherman and that release these fish as they perform their most important task in keeping the species going. Don't hold me to the numbers, but from what I have read, only 1 or 2 striped bass make it to adulthood for every 1,000,000 eggs a breeder releases. And further, I hope the kill tournaments that occur in the spring one day change to C&R. You can still do good, as in for good cause like fundraising for a charity, while you do good for the fish and the sport.

The back bays and smaller rivers have been and will continue to give up small bass. Use circle hooks and get these fish back in the water as soon as possible. The above pick was up on Facebook, and the poster got killed for it. Those little guys are hungry and will surely swallow an offering that is weighted down and connected to heavy pole. You won't know you're in until the bait is halfway through the fishes digestive tract.

I was looking at the Maryland Chesapeake Bay striped bass regulations. March 1- April 14 is catch and release only. April 14 - May 15 is one bass 35 inches or longer, and then May 16-31 it's two fish per day 20-28 inches or one in 20-28" and one over 28". After June it's the same as the later part in May. The Delaware River sees a whole mess as NJ, Delaware, Pennsylvania all have different regulations. Confusing for the angler, and mores for the fish depending on which side of the river you swim up. 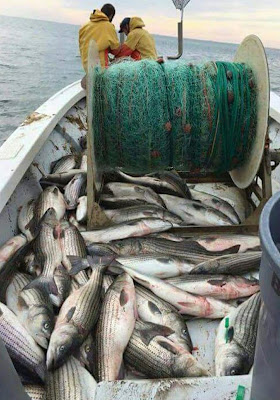 And it's that time of year again to see pictures of the striped bass commercial fishery in action. We'll see tons of bass in boats, in all kinds of nets, on the docks, and floating in the ocean as by-catch I don't know what to say about it. I just wish striped bass were a gamefish. Catch and release only. Period.

This past weekend I was at my dad's house and we were looking through some old photo albums. When I got to this group of pictures I found one with a net full of striped bass. He remembers the trip and taking the picture. I was out on Eastern Long Island probably 30 years ago. 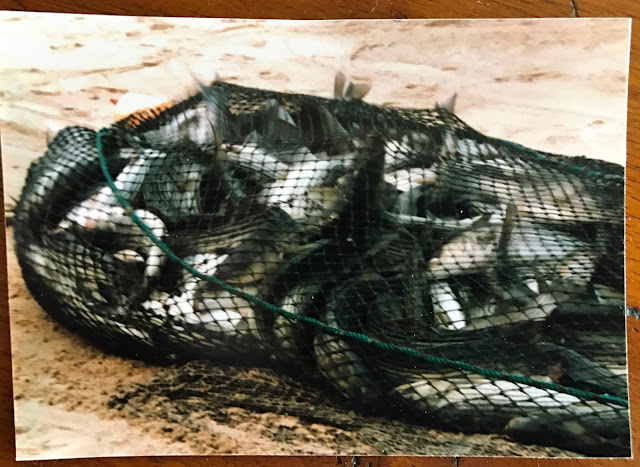 I know gill netting and or siene netting has been around forever, but I am glad that it doesn't take place here in New Jersey. I know our state is a mess when it comes to managing striped bass harvest, even though we have no commercial fishery, but that would be a real demoralizer to pull up and see this going on. I found this Surfcaster's Journal video on You Tube. Thought is was interesting.

Posted by The Average Angler at 12:10 PM