05.24.12 Stopped by the river this morning...and some big girls caught yesterday

While driving through town this morning I found the bunker flipping happily on the incoming tide. Then I saw the water go nervous, and something run through them. The fish were out of reach but I waited in the light rain to see if they would get close. With them starting to move out I took a position at the end of the rail near the boats. After being just so close, I thought how it would have been a great morning to be out on my boat in the river. Maybe tomorrow. 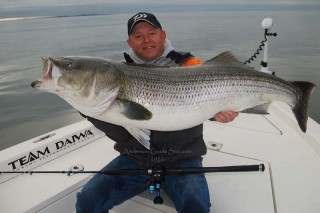 On a better note, yesterday I got a message from guide Blaine Anderson, who said he had just caught a 70 + pound striper in Connecticut. Remember last year the new 81 pound recond was taken in the same state. The best part was Blaine attempted to revive and release the fish but after a while it went belly up. Nice to see that was one his mind though, and gave it a good try. You can read more on his blog, HERE. 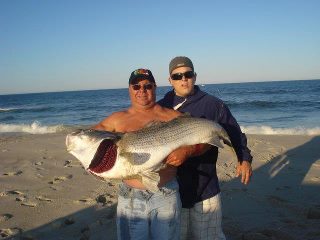 On the Jersey Shore angler Paco Wagner did himself proud, catching a 50 pound cow in Ocean County, and then made me proud releasing it to spawn and continue the species. That's all good until he meets some of the meat takers I see up here in my parts in Monmouth County. It was really nice to see a trophy fish caught, photographed, and released. And if he kept it, that's within his right and the law, and I wouldn't have anything to say. But, I do like to see the big ones, well almost all of them released. 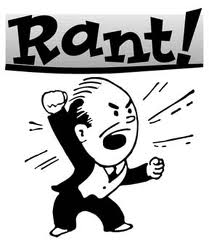 And my last rant of the day concerns the pictures I see on the web and on Facebook. Can we please stop being enthralled with images of a group of anglers standing in front a pile of fish on the dock? Can we stop holding fish out of the water for far to long while we take pictures? Can we keep our fingers off their gills? Can we think of pushing down the 6 or sometimes 9 barbs that these lures have? And the same goes for the flies with barbs that are ripping the trouts lips and gums up? And lastly, can we please learn how to hold a fish, with wet hands, and a net underneath it so it doesn't hit the rocks or the bottom of the driftboat? And please, stop shooting the angles where your fingers look like sausages on the underside of your fish and your head looks shrunken and four feet away from your hands?

We all know you're a great angler.....what are you trying to prove?
Posted by The Average Angler at 11:10 AM