With low tide at 440 am I slept in a bit to catch the start of the incoming. I was on the end of the rocks at 6 fished the south side as the NE wind made throwing the fly a challenge. The mullet are here so I open with a Snake Fly in fluorescent blue, materials I picked up from the Orvis New York City store the last time I was there. I tied up a bunch of white but thought this color might show up nice in early light or breaking waves.
The bite lasted over a half an hour with several anglers far and near hooking up and losing or landing bass to keeper size. There was also some small blues in for the breakfast meal.
It's not much, but the water is 71-72 degrees so it starting to slowly drop. According to NOAA this half of the month average water temps should be around 66, you can see that graph HERE.

Remember last year fly guys and girls, a few fish in September with the mullet, then a looooooong dry spell as IBSP lit up, and then it was our turn late fall through the winter. Easy does it, you don't want to burn yourselves out early. 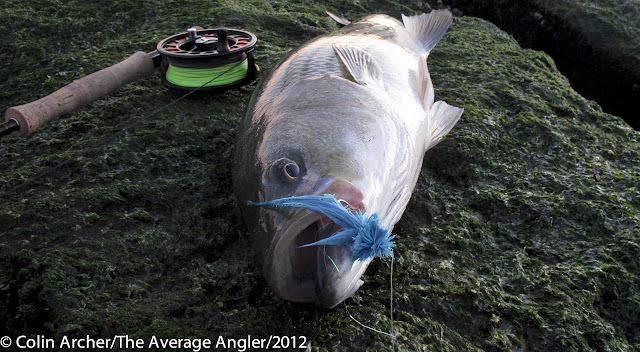 Posted by The Average Angler at 7:48 AM