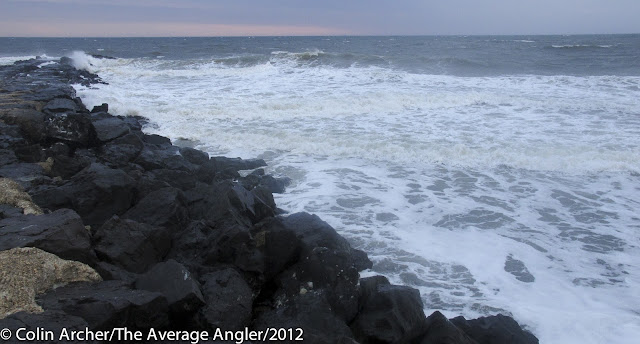 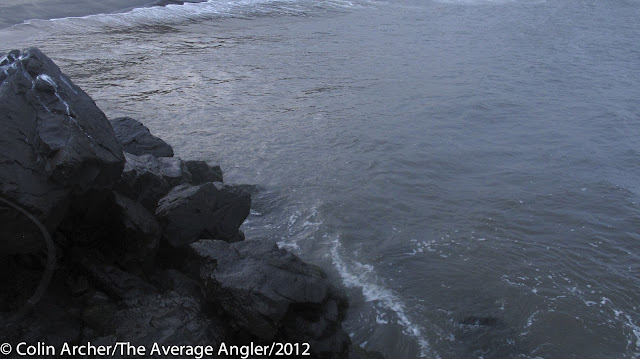 I took a ride down to the beach to see how things were looking compared to yesterday. The wind  was howling from the S at 20 with gusts over 25. I decided to give it a go and went with my Orvis Depth Charge line on my 10 wt and a white Snake Fly. I fished the north side pocket with the wind at my back. There was another angler throwing bucktails out midway on the groin.
I moved up and back without a bump and then saw some mullet being bothered in the wash. From my position and with the wind at my  back I was able to the paint the beach with my fly. I made some casts and then felt a hard stick dead strike. The kind that feels like when you strip a fly into the rocks, and it sticks. So that's what I thought it was. But it wasn't. My line was moving out at a steady, deep, and angry pace. So I was quickly into my backing and I moved down along the rocks and jumped down onto the beach. 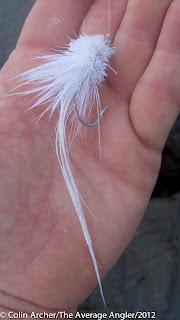 I watched as my backing disappeared off my reel and went farther out along the rocks. I was easily out 175 yards of backing, and I thought it might go. I tried like to turn the fish but to no avail. I was able to crank down a few times, but it just pulled again, harder. This lasted 8- 10 minutes and then it snapped off.

As I reeled in, and reeled in....and reeled in, I couldn't imagine what I had hooked into. My first guess was a cow nose ray. Don't know if it would grab a Snake Fly out of the wash. If it was a fluke....it would have been more like a halibut. It wasn't a bluefish, and if it was a striper it was a 50 pounder. Cobia? Drum?

I wish I had just got a glimpse of it.

I pulled out of there and went down a blocks and saw my buddy who watched my fight unfold from a distance. He made me feel a little better when he said, " I knew you had something good on..."

I guess you never know what is lurking under the waves.

Posted by The Average Angler at 9:09 AM