07.05.12 One late night during the winter I cursed this pipe....this morning I loved what it holds 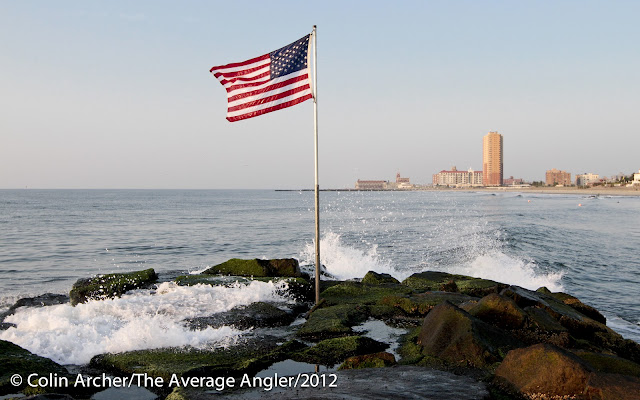 It was a night during the crazy "fall run" that we had here along the Jersey Shore this past winter. I think it was late January! I decided to fish Allenhurst and was working my way around the "T" jetty as it's known when a nice striper hit my fly. I was on the beach, or cove, side and quickly the fish took me into my backing. From where I was I was below the rock line and had to high stick my rod as the fish started to run out in front of the rocks. As I watched I saw my line catch an 18 inch post sticking out from rocks. I wondered who put that stupid thing there and then had to wade out to my chest, climb up on the rocks, fight the fish, and then reach to lip grab it all the while waves crashed in front of me. It was another great night, where the water temps stayed above 45 and the bait and bass hung around till spring.
Last night was July 4th I took my daughter down to watch the Asbury Park fireworks. We made a late move, so had to watch from the Loch Arbor side of Deal Lake. It was a nice clear night and I know  the beach and area around the "T" jetty was full of spectators. As the sky lit up this flag, stuck in the pole I came to hate that late January night, must have looked majestic. This morning on my rounds looking for flat fish swimming in the wash I found that flag still waving in the west wind.

I remember a few years ago standing at Convention Hall during the July 4th fireworks and they played one of my favorite Grateful Dead songs for the finale, U.S.Blues, and one of those lines came to my head this morning as I looked through the lens,

"Wave that flag, wave it wild and high,
Summertime done, come and gone, my, oh, my."

But summer here is just starting.

Posted by The Average Angler at 7:17 AM