So I went away with the wife to Newport, Rhode Island. It is one of my favorite places and I thought that even though we are crazy busy it would be nice for just us to take a long weekend. We got engaged here four years ago and it was time for a return trip. We left Thursday and had to drop one of the kids off in Brooklyn on our way up. No problem, it usually takes 3-1/2 to 4 hours, what could a quick swing through NYC add to it....well it took us almost 8 hours. But we made it up in time to eat at Scales and Shells so all was not lost on day one.
This was not a fishing trip.....but.....I did bring a few fly rods, my waders, and a stripping basket. On Friday we took a nice ride on Ocean Drive where we found a few striper fishermen who should have earned a fish or to just by getting out to their spot. Wetsuits seem to be the norm up here and these guys charged right into and swam out to the rocks. I don't think me in my waders would have lasted long crossing that moat. 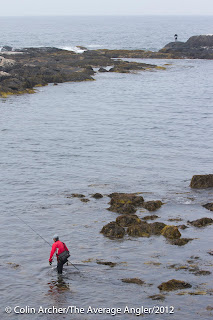 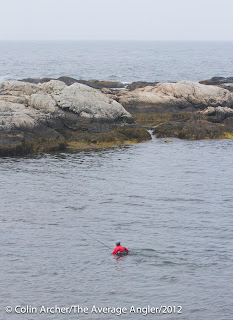 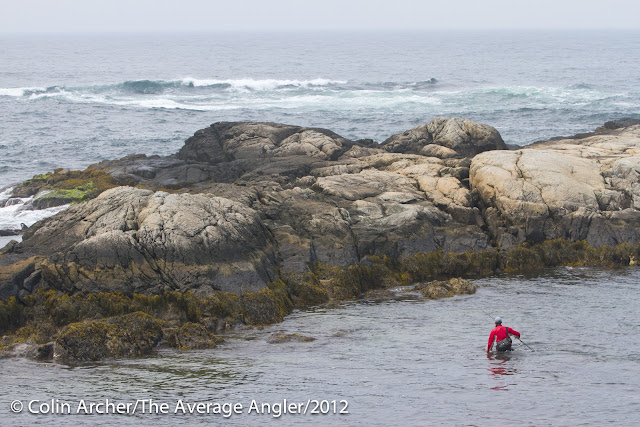 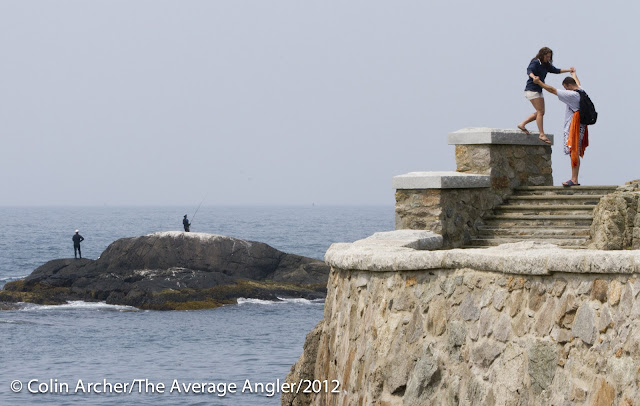 I caught my first striped bass on a fly rod about 12 years ago on a charter I took with Captain Corey Pietraszek of The Saltwater Edge. I remember I had a great time and caught a few schoolies with him that day. That was when the shop was down on Thames Street in Newport. Whenever I go away I always like to visit and support the local fly shop so after some lobster rolls at Easton's Beach Cindy and I took the ride up the street to The Saltwater Edge which is now in Middletown. When we pulled in there were three guys in the lot and one was holding a large striper. I pulled in and asked if I could 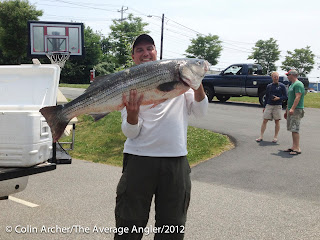 take a quick picture of him holding it. It was a 45 pound cow, and he had a 37 pounder in the cooler. By then Cindy had joined me and I said to the guy who was all smiles,"Wow, that's a nice fish." And the other two guys had come over, and I added, "What did you get her on?" And then there was silence, like cat got your tongue silence. The client looked to the guide and said, "Capt?, and "Capt" said nothing, and then there was more silence. It was awkward and I thought it was a real sh@t way to handle my question. I was just looking to talk some fishing. Listen, I'm all for keeping your secret spot, or even what you actually used, where and when.  So just say, well, something. But that's okay everybody does what they do, some guys do the same thing down here in Jersey. I like that the guy checked with the Captain before answering though....hey, he paid for that trip, expertise, and it's the Captain's call to answer or not. But, you could say artificials, bait, flies....or even,  I can't or won't tell you. At that point I almost left. But we went in anyway, and luckily met a great guy at the counter.
I wanted to buy some locally tied flies but all they had out were some Umpqua's so I asked if they had anything else in the shop. The guy at the counter, Steve Cook, works there and ties flies for the shop and he had some in the back that hadn't been priced and put out yet. So the guy who was tight lipped outside, who is the store manager, brought them out from the back for Steve to show me. He suggested, well sold me on a few and I bought five flies and he was nice enough to give me advice on a spot to try in the morning. I left feeling better after talking with Steve, but still bothered by the silent treatment.

On Saturday morning I got out at 445 am and the first thing I realized was that first light is earlier up here then back home, and that was cool. I stopped by the spot Steve had recommended but I really wanted to fish out front so I drove out to Ocean Drive. I found some familiar looking territory (above) and had a blast for a little over an hour catching five fish to 25 inches. The spot was so fishy looking from the road, and then even more fishy looking from the out on the rocks. I was out low on the tip and got swamped by a rough wave that caught me head-on, so the early morning saltwater bath woke me up. 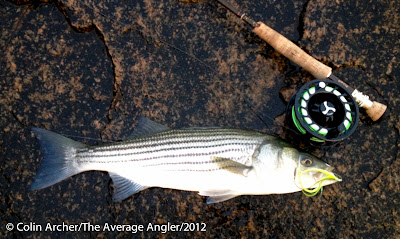 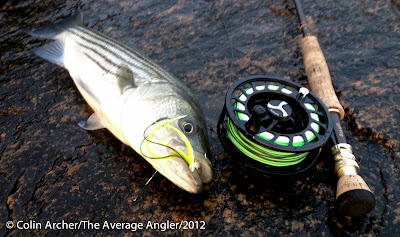 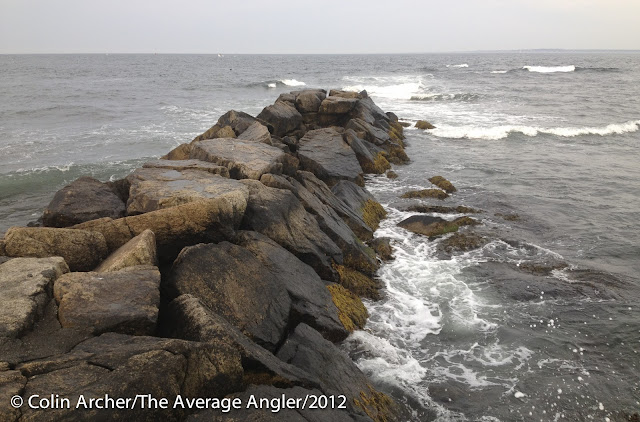 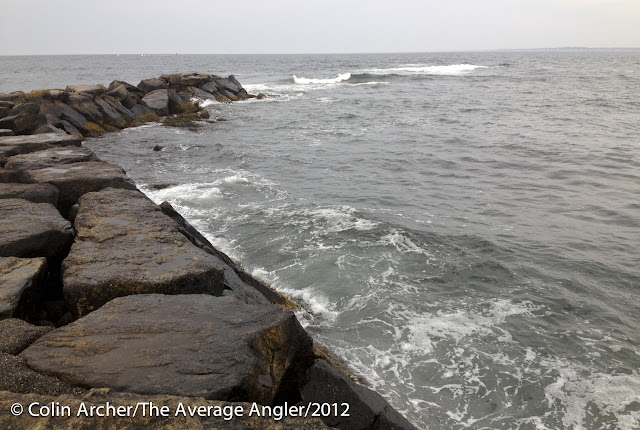 The other thing I noticed besides the first light and sunrise times, was the difference in the amount of and texture of the structure and rocks along the bay and coast. With spikes on, your not slipping up here. In addition to the super grip rocks, was the sharpness of them. These will slice through just about any line, as I would learn early Sunday morning. 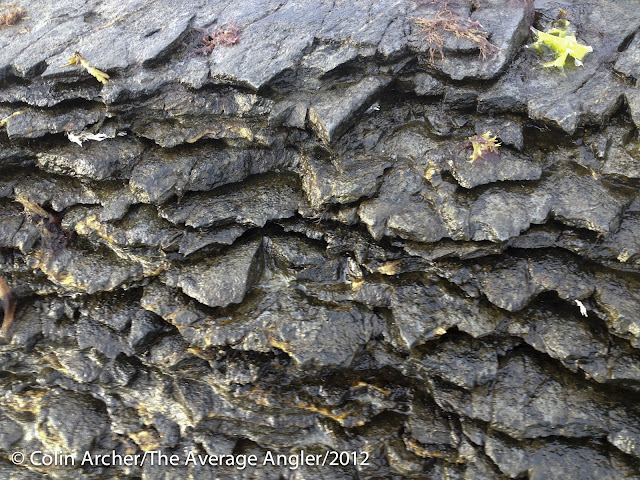 After a great Saturday, and a fun lobster dinner that lasted hours at The Barking Crab, it was up early Sunday for hopefully more of the same. However, remember, this is not a fishing trip. I went back to where I was the day before and the wind had died down a bit and the water cleared up. The S-SW winds had pushed the grass, weeds, ect up along the shore where I was fishing, but on Sunday it was cleaner. I made my way out hoping for a repeat, I put my money on the sixth cast....that came, and went, and then on about the 40th cast I hooked up with a feisty and strong fish that took a beat-up-Steve-Cook-tied-fly right at the rocks. After a quick pic and release I went into my fly wallet to give them a different look. Little did I know, but as I tied my fly on, my 85 foot sinking fly line had made it's way into a little hole in between the rocks, and then found it's way into some current. Needless to say, no matter what I did, those razor blade rocks had there way with my favorite Orvis Depth Charge line. I though I just about had it cleared and with one pull it parted....and I was done. I was so happy to have been able to fish while I was here, and even more happy I bought a few to hand. But, the best was yet to come. 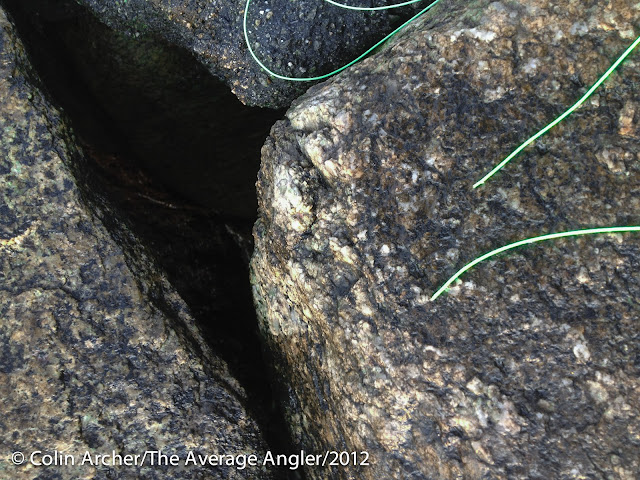 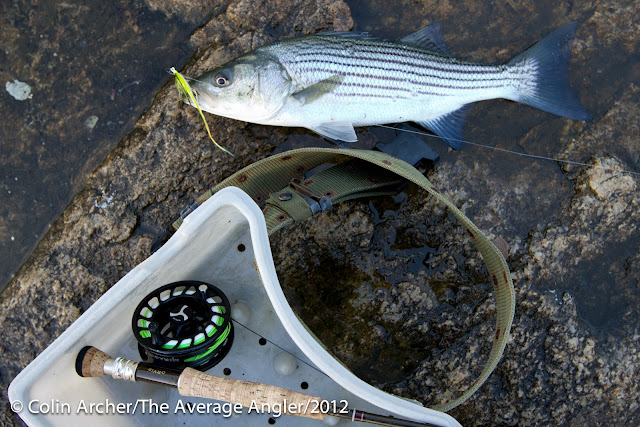 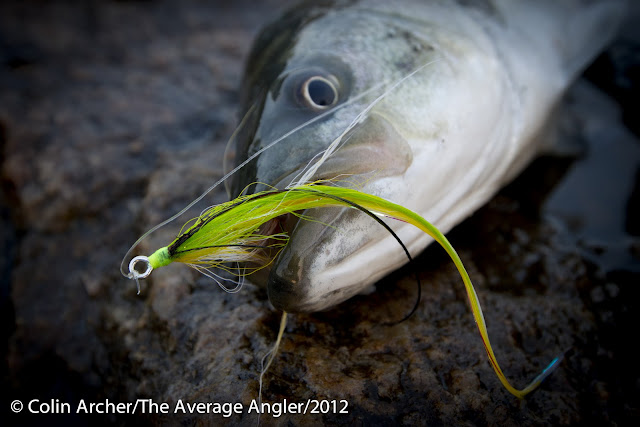 So, now for the one that got away story. On my way back to the bed and breakfast, I stopped before the bridge to Goat Island. It's a popular spot, people fish here around the clock, but mostly at night. This morning the water was glass and gin clear. I was in my tights and I looked around from my car and didn't see anyone, but I did see some bait. I got out and walked to the wall and found silversides pretty much stacked up along the bulkhead. I looked down and every now and then the pod would part and upon looking closer I saw a large shadow swimming slowly below. I thought bluefish, but that's not a blue move, I thought striper, but, it was more sharklike. I went back to my car and changed spools and put on my Orvis Striper Intermediate line, went down to 12 pound flouro tippet, and tied on a white with peackcock hearl Clouser. The bait was moving away from me so I made a cast of about 45 feet. I counted down about 8 seconds and began to strip....strip...strip....BAM! It was a good fish, a very, very good fish. I was into my backing and all I could do was smile. Here I am in tights, Crocs, no basket....with a, very large striper on.....all alone in calm water on a beautiful day. I now had to come up with an exit strategy. I couldn't lay down and lip it, the distance to the water was too great. I had to climb down the yellow ladder to land it. I had the fish on the top of the water and it had to be 35 inches and at least 15 pounds, and it was a brilliantly colored fish. I put my hand on the ladder, snuck my foot around to the top rung, the fish turned, I held my right arm up....and it was gone. In a way I am glad it went down like it did, the landing and release wouldn't have been pretty, but what a pretty fish it was.

It was a great ending to a great non-fishing trip! 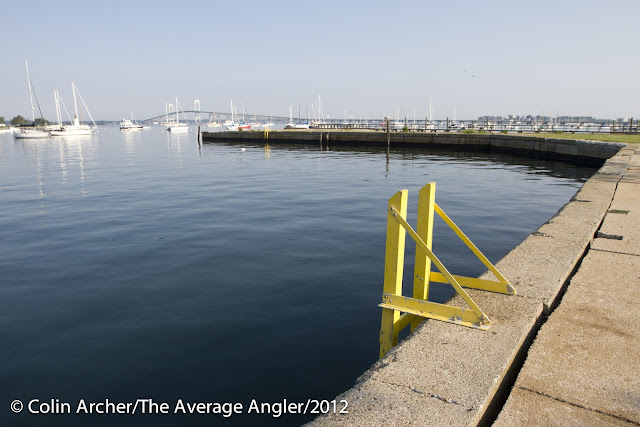 Posted by The Average Angler at 7:54 PM