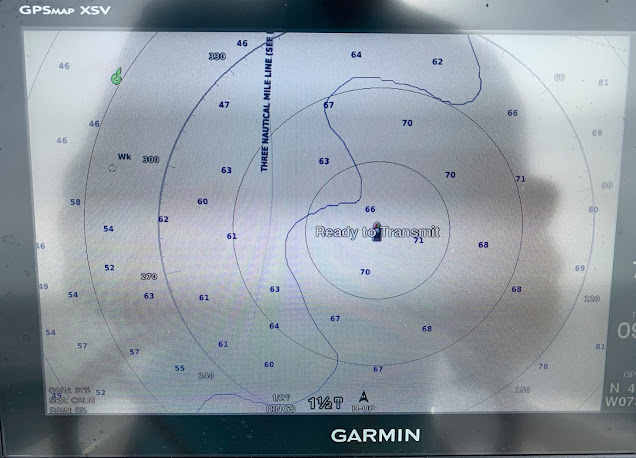 So what's up with the three mile line? The three mile line protecting striped bass was part of the Atlantic Striped Bass Conservation Act which was passed by Congress in 1984 went the decline of striped bass hit an all time low. So I fished around the web and found some interesting things, "The EEZ has been closed to the harvest and possession of striped bass since 1990, with the exception of a defined route to and from Block Island, whee possession is permitted, said Kate Brogan, a spokesperson for NOAA". And this was on BassBarn,

"was talking to two barners today who were out last week 10 miles. they were catching loads of stripers between 34 and 42 inch non stop.all were RELEASED.everything caught on metal.he tells me there were acres and acres of bass moving through. after the third day they got tired of catching them.he figures they landed and RELEASED lots of bass between the two of them.they also tell me there must have been 8 or 10 party boats among the many other boats there. now these two kept nothing,but isnt it illegal to target stripers after the 3 mile limit? his answer was possession of stripers is illegal, fishing for them isn't

Every year and when you're out there you wonder just what's up. Is it okay to head out over the three mile line to fish? For say, bluefish? Or tuna? Or mahi? You see there's a lot of boats that fish in the fall over the line, six packers, private boats, and even the party boats. They steam out full blast and head 4, 5, 6 even 8-10 miles out and you know what, nothing happens. Why? Because it's a law that cannot be enforced. What can be enforced? Being boated by the Coast Guard and being checked for the possession of striped bass or a safety check. The code word to the Coasties comes down to one word, "Bluefish". If you read into the party boat reports they most time of the time will put the word "bluefish" in the report, 'Tons of big stripers.......and two bluefish".

When you head out, if you're not the first boat out, then you will see basically two flotillas of boats, well maybe three. There's the group way inside the three mile line, the group way outside the three mile line, and then there's the darters, who are nervous of being caught and go back and forth between the two groups. Being caught? Recently the Coast Guard has been out boarding boats....party boats? No not them, they get a pst, but the smaller six pack boast yes those. When boaters see the Coast Guard coming they don't run, when they see them flying overhead they don't duck....why? Because as long as you don't have bass in your boots or no life jackets or flares you're good, and they know it. "any fish in possession cap?" "Nope" "Can I see your life jackets and throwable device?" "Have a good day".

What do I say? I say it would be nice if anglers could practice catch and release on striped bass outside of the state's jurisdiction of the three mile line. Problem is, guys would screw that up and ruin it, like they do everything else. But why shouldn't we? Right now we have party boats landing 40 and 50 pound bass 15 feet above the water line depending on the tide and then releasing the fish headfirst like and albie. This is not good practice. Just take a read on the forums when a guy hands a bass he caught on the sand...."keep em wet", "Don't remove them from the water", well picture the mate on that party boat, "Tally ho...as he plunges the female cow back into the water". 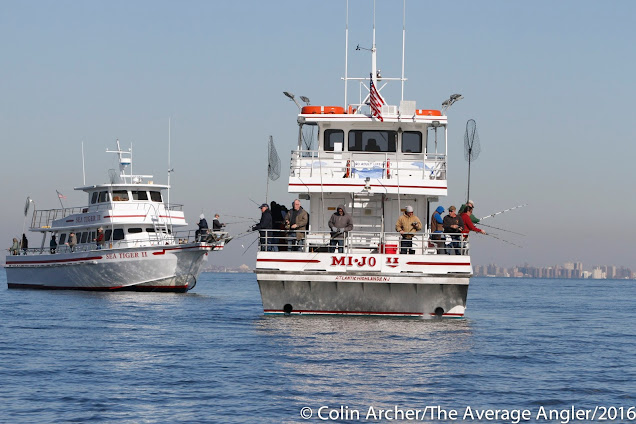 And while sand eels and shads have been hot for the jig bite, let's talk about the live lining that's going on out there as anglers "cull" through big striped bass  to get "their keeper". In New Jersey this year you can't harvest a fish between 28" AND LESS than 38"- a 38 inch fish is illegal. So is this slot helping us protect the big fish when sang and drop continues? Are guys targeting 32" inch fish snagging and dropping 10-12" adult bunker? C'mon guys. In 2021 the new regulation comes into effect, maybe. Those "live" fisherman will have to use circle hooks to catch their 28-38" inch bass. No more 10/0 treble snagging hooks lodged deep in the throat or bowels of that 40 or 50 pounder. 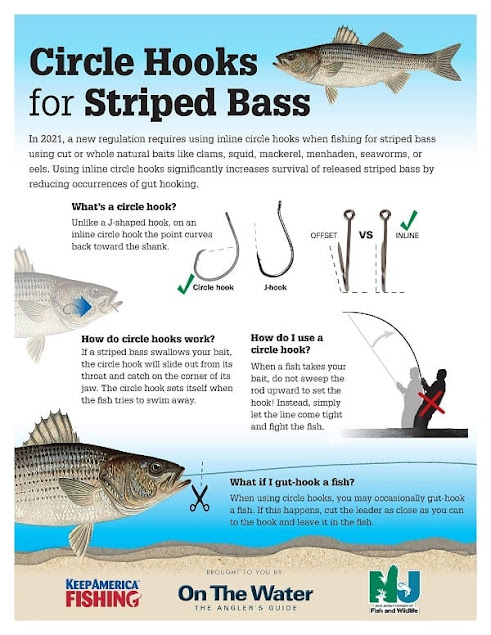 I saw this picture of the take from yesterday's fishing from a local six pack Captain. All legal fish, bonus tag fish included. How do we move forward to protect the striped bass, allow anglers to enjoy the sport, charter captains to make a living, and for people that choose to legally harvest and enjoy a fish for the table? You see, guys won't drop say $100 for a head boat trip to play catch and release or to bring home one 30" bass, and forget about the $500 and above price tag to go out with a six pack Captain. The rules have not be set to protect the striped bass, or those that fish for them, thats why they have resorted "to bluefishing" in the fall during the striped bass migratory fall run. 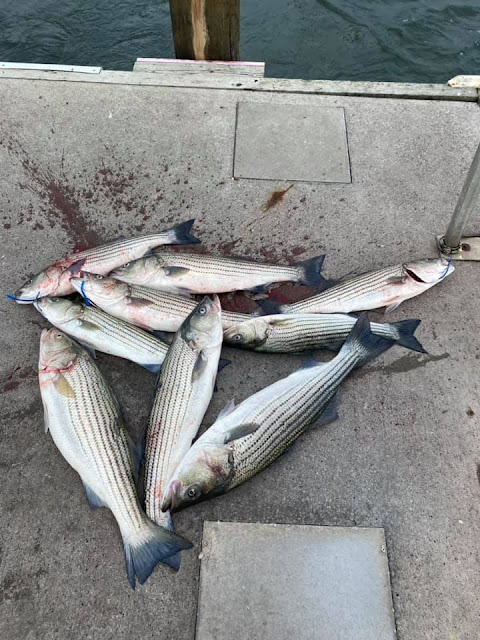 So how can a charter captain help? Stick to your guns. During my trip the other day the question came up "If I catch another can I keep it or are you just catch and release?", "C&R only please". How can you do that? Pretty easy. Kinda like telling patients I don't prescribe benzos, my boat, my practice, my licensees. The only I should ensure is that I tell the sports that when they book a trip.
Posted by The Average Angler at 5:19 AM