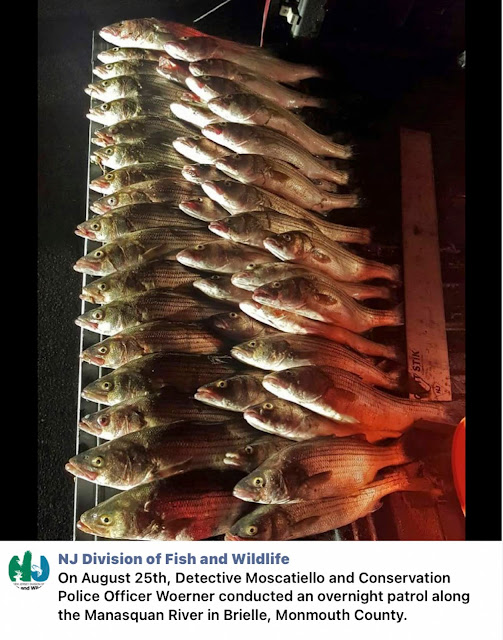 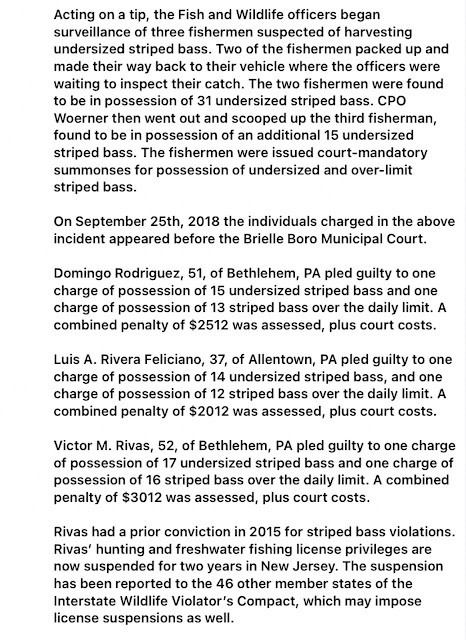 Poaching. A problem. Happens all over the world, and New Jersey isn't an exception. From the banks of the Hackensack to the Raritan to the Delaware to the Manasquan to the Great Bay, if there is an opportunity to catch and keep fish people will do it, some even if it is illegal.
Striped bass are a valuable commodity, always has been, that is why there is a commercial fishery in most states, not New Jersey, and anglers, from gill netters, to seiners, to hook and liners, catch and sell striped bass. In Jeff Nicole book, Caught, he talks about how guys would catch fish on Long Island and drive them to the back door of restaurants in New York to sell them illegally.
Poaching is also popular for the thief that wants to take home fish for dinner. That goes for the lone angler looking left and right stuffing a 17-3/4 inch fluke into his backpack in July, see more HERE, the charter captain fishing over the three mile line keeping fish, or the Three Amigos listed in this realize from the NJ Division of Fish and Wildlife.
Feliciano, Rivas, and Rodriquez, drove 125 miles one way, over 2 hours, on a hot August night with the intent to catch and keep and haul back to Allentown and Bethlehem PA as many striped bass as they could catch and stuff into coolers and plastic bags. And this wasn't the first time for Rivas, he did this in 2015.
During this haul the officers got three bad guys and 46 undersized striped bass. If you are in the know of the Manasquan River then you know about where and how many fish school up in the mid to late summer to chow on the white bait that is growing in what is like a nursery in the Barnegat Bay and Manasquan Rivers. Its not easy access and fishing, but outings can be productive on the right time and tide, usually in the dark when the boat traffic is less and the bass aren't worried about getting a propellor driven over their heads.
These fellas paid fines of $2,512, $2.012, and only $3,012 for the repeat offender Rivas. I won't get into anything political, but I find it funny that when you apply for a fishing license or permit in the State of New Jersey they ask if you are in good standing and have to complete the Child Support Certification. If you are not, you breaking the law, and cannot have the privilege of hunting and fishing. But if you are arrested, charged, and convicted of a crime against wildlife they don't ask or investigate if you may be in violation of any other laws in this state or country....I don't get it. 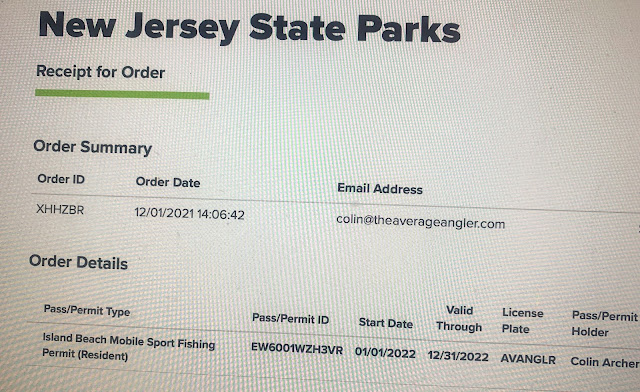 And in keeping with my new favorite hobby, I went online and purchased my 2022 Bech Buggy Pass for IBSP. I was going to go down there for first light this morning, leave at 0330 and be back at 10 am, but after looking at the S/SW wind and just talking myself out of it I decided to stay home. I hope the anglers that went were rewarded. They say there's a ton of bass arriving in Raritan Bay or the ones that are there are moving out, not really along the beaches in good numbers, but the boats are finding them chewing on top out a ways....sand eels? I think so. Head boats suing Ava's to jig up fish usally means its sand eel time, and it is.

As far as the IBSp bit, it lasted, it ended, and the fish have moved sauté to now LBI and points south like Atlantic City. We'll see what happens, its gonna be a few warm days with the southish wind before it goes W/NW over the weekend into next week, with good AM tides.

Posted by The Average Angler at 7:22 AM