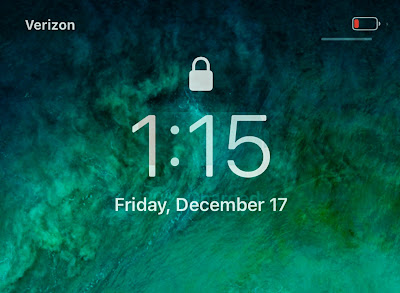 That's what I was dreaming about when I woke at 0115 am. I knew what I had to do. I had went to bed around 730 so I was good to go as far as sleep was concerned. I went over to Theresa and scared the s*%t out of her when I stared down to let her know I was going. She thought I said "430", well it was a tad earlier then that. 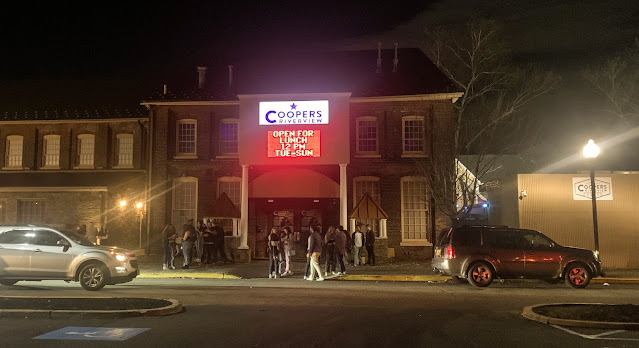 So I'm driving down 29 like an old man and I look over and see just what a difference a few decades makes, 20 somethings standing outside thew club which had just closed shop for the night at 2 am. Here I asleep before they probably ordered their first drink and hit the dance floor. 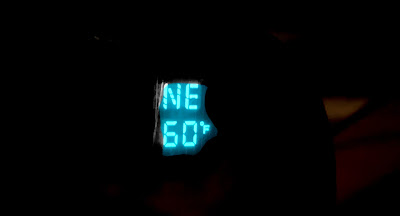 How could I not go? Besides how I will pay for it today. But 60 degrees at 2 am with an incoming tide and a supposed light SW wind. Well the wind was a tad more west and blowing to 15- 20 at times. I decided to head about mid Arthur Kill to see if the fish might be closer to shore and a little active but that wasn't to be. No signs of bait could be seen with the flat conditions protected from the wind. 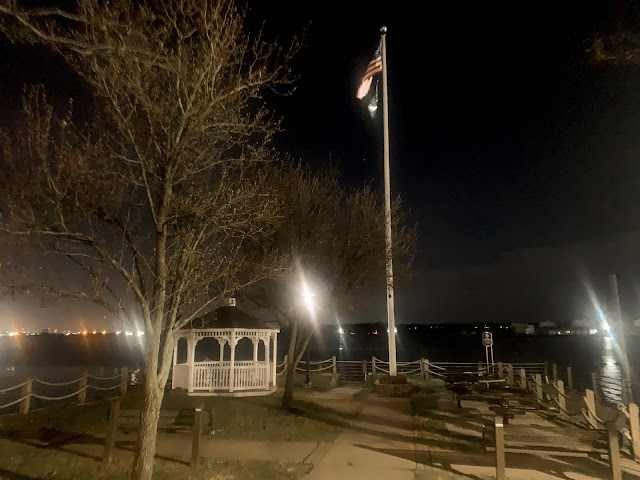 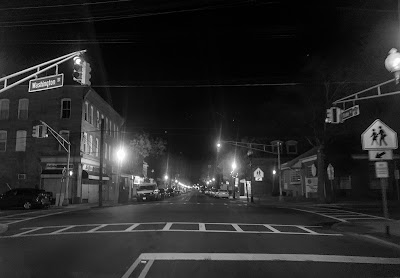 I went back down south a bit to the city and made my way to the beach. No one around and the west wind made it a little tricky casting with the right hand. More water then when I left a night and half ago just before low tide. My plan was to find some foraging or dumb fish that made their way up and in with the water maybe finding that bunker I found the night before. I used the cover from the bulkheads to 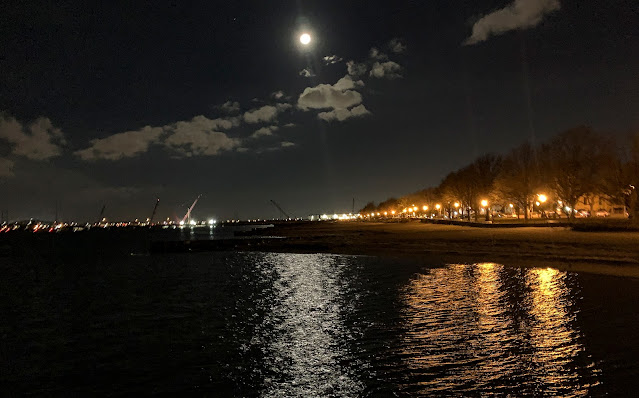 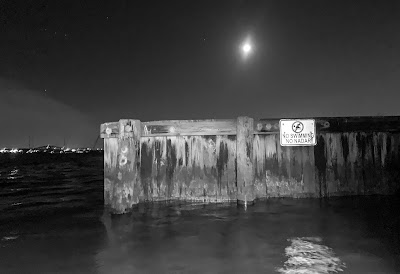 stay below the wind and long or short casts didn't matter, no one home for me. I bumped into another guy who was throwing lures and had just switched over to soaking a dead bunker he found on the beach. No fish for him either. With the Yukon on the market and a prospective buyer coming tomorrow I jumped in my "new" car, which is actually my sons old car. His sister was going to take it over but the manual transmission has her rattled, so for now it will get me around to and from fishing and work. 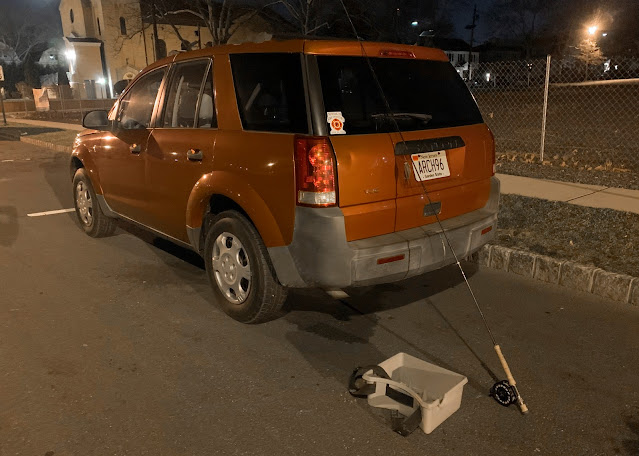 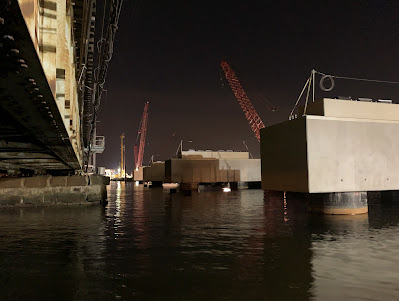 I thought maybe with the west wind the bunker had moved, well west, and they did. Found them swimming in the shallows with nothing on them. I was just waiting to see something come onto the flat and make a mad dash for a meal, but no. I waded around the bridges and almost lost my footing on those prehistoric jagged rocks they had strewn on the sandy flat around the pilings and abutments. 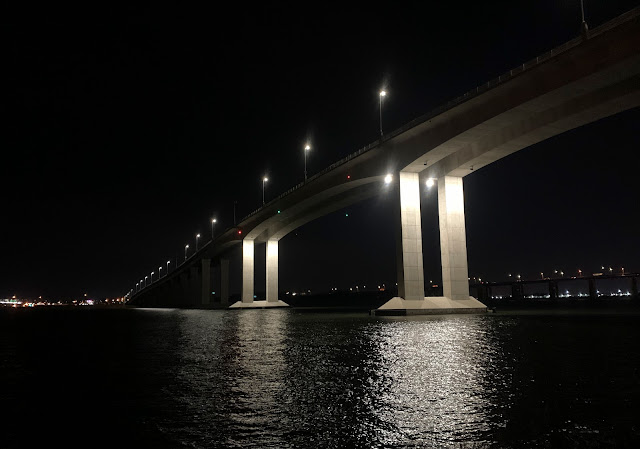 Before I decided to quit at 530 I made one more stop. I found two guys fishing in front of their car with was backed up to the water. They had the bell tipped rods planted in the rocks and in hand. As I watched one guy got one, and quickly brought it to the car. Then the next guy hooked up and after landing the 30+ inch keeper sized fish he hit it over the head with a rock and left it next to him. He let his offering go into the air and it came down with a "doosh", surprisingly no too far from shore. I thought the fish are here so I made my way down and started casting my big black Andrew fly with a sand eel teaser in case they wanted a smaller snack. Then I heard the bells. 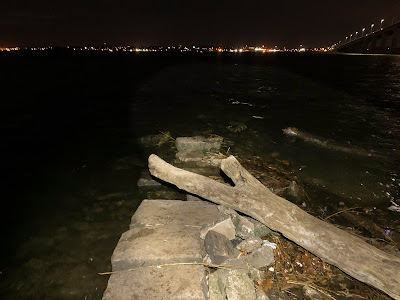 I could see this fish was a good one and when I saw him pick it up my jaw dropped, easily 35+ inches and twenty something pounds. This too got the strike of death and before I could make my way over, really to see how many fish they had stacked in the hatchback, him and his bud broke things down loaded up and were gone. I couldn't get the plate, and if I did I would have called them in, just in case they do this every night they Fish and Game guys would have a history.
So with no one around I went to the spot in front of the honey hole, which again was in casting range, just that I wasn't using 8 ounces to hold. I fished it hard for an hour, letting my sinking line sink, many times getting caught up on the bottom. I covered it well, fanned out and from to to bottom without a tap. 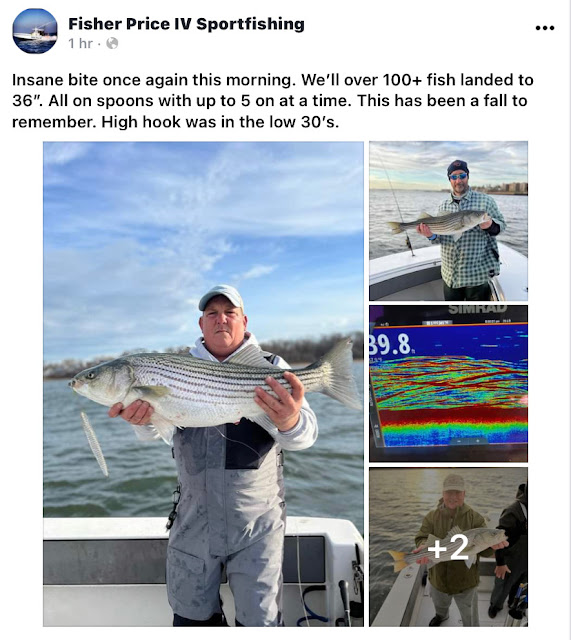 Maybe these just aren't fly rod fish. I wonder how those flutter spoons the guys are killing them on from the boats would do from shore? They sure work from the boats, as evidenced by Fisher Price's report from yesterday, amazing what has been going on in the area for over a month now, maybe even longer.
Posted by The Average Angler at 8:46 AM