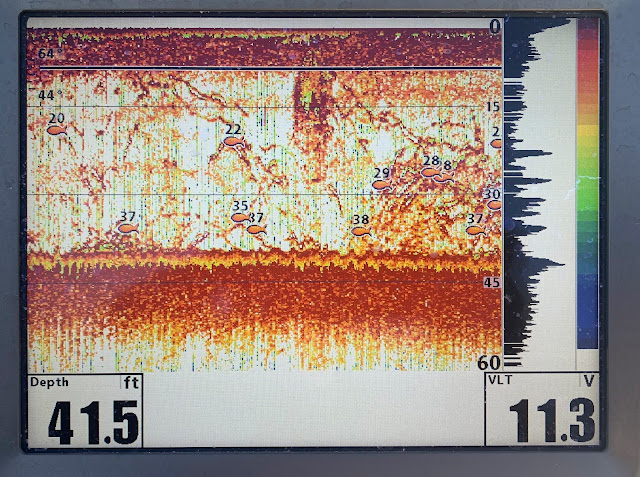 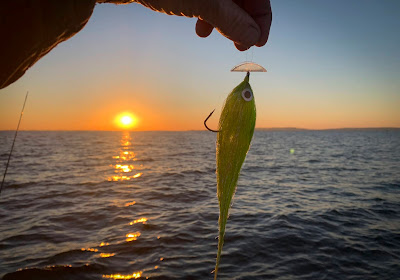 So today we had to nymph them to get them. Started out at first light in the Raritan Bay with the other early birds hoping The Reach was going to produce early like it has for the past week, well that's over folks. Yes still bait and some bass around but the bulk of fish arrival #2 has come and gone. I tied on a Jim Matson fly, the one below is on a 6/0 hook, with a Pulse Disc and was determined to get some good fish on it today.

Out first stop just didn't do it for me, gannets diving and birds looking on the second hour of the incoming. West wind against the those wasn't bad, just annoying. The forecast had it dying as the day went, I just wanted that flat calm water so you can easily see the fish breaking on the bait. For us, today and last week, it was all or mostly all big bunker, the peanuts I had seen in stupid numbers in the early fall must have blown out early, although there are still some around. But its not like peanuts we like to see, peanuts being sprayed as fish are running through them.
I had dreams that Hoffmans or West Bank was going to be good, thought that for a few days based on my gut and no intel. So we headed over and found nothing, no birds, no marks, nada. I figured if the Raritan Bay wasn't doing it for me then maybe a trip under the big bridge into New York Bay might be good or at least give some protection form the wind against tide.
A little after our arrival an ominous sight caught my attention as I was on a backcast. It was around 845, eerie, from our vantage point of a fire in a building under construction in Brooklyn framed by a set of high rise office towers, and the plane flying by over the smoke.....just well to close to memory for comfort. 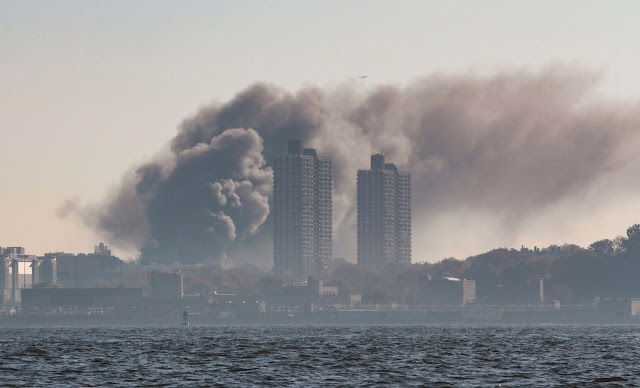 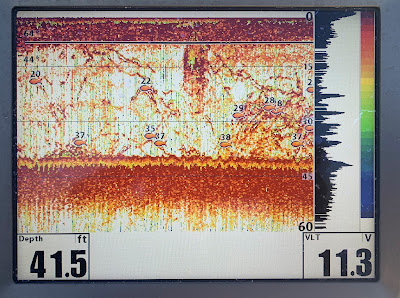 I was heading to Lady Liberty when some birds caught my eye. I made a left turn and found some birds and solid marks. For the next two hours we watched about 10 boats next to us catch about every 10 minutes, including a pair of guys sharing a jet ski, alrighty, and putting on a clinic in drop and reel fishing. And Leif and I.....couldn't get a bite....for hours. 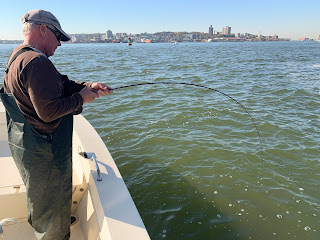 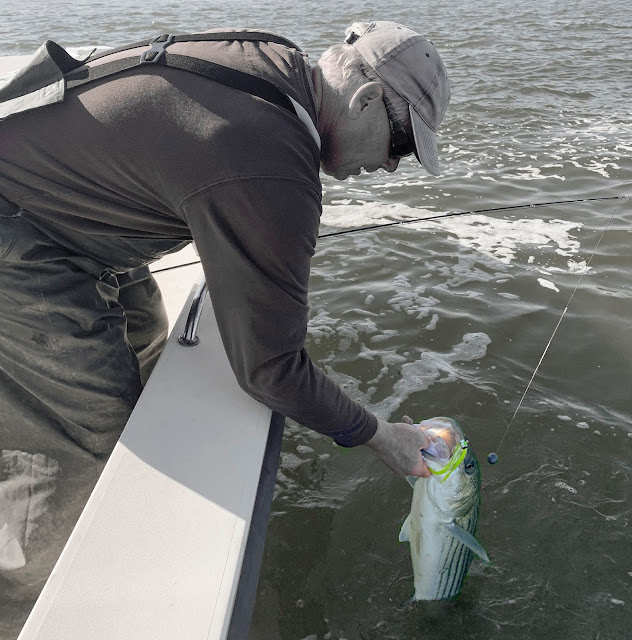 I traded up the Pulse Disc for something that served today and the fish well, either a slip or egg sinker tied above the loop. The fish were down, say 40-45 feet of water depending on where we were on the tide and the current, incoming, was ripping. About an hour and half before the ebb the tide slowed a bit, we got our flies down and started to get to work finally. The father who had his three kids out that caught from arrival to departure had nothing on us now. 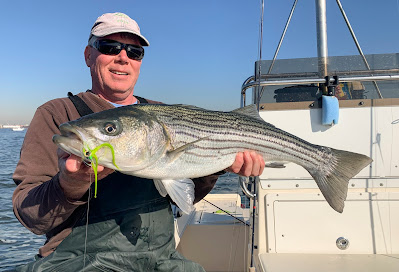 And for my rant section of today. Can Leif take a decent picture of me or at least let me know that my double hat, double pair of pants, no ass, and double chin doesn't make for a great photo? Rant over. 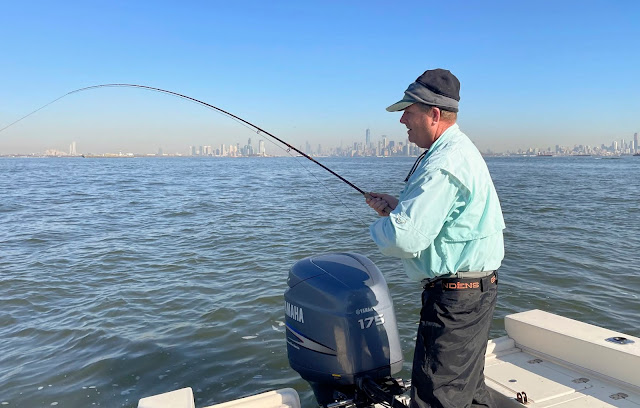 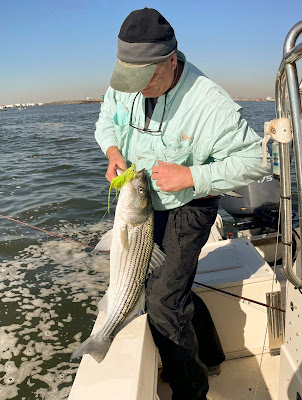 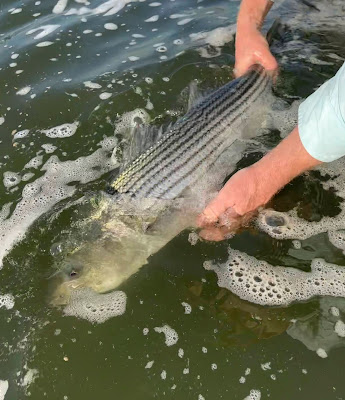 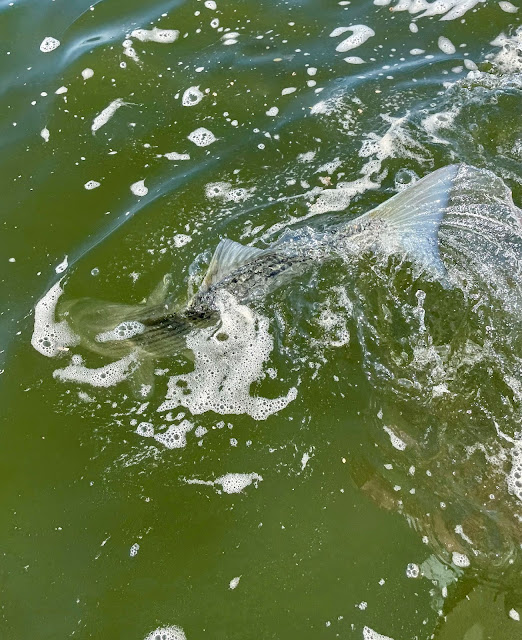 So these fish weren't the jumbos of last week but they were good and pretty and the perfect fly rod sized fish, which is 28- 34" inches. I don't think today measured up to expectations but the weather was perfect for November 9th. But I am done with this bunker bite, especially for the fly rodder. You may find them but they are tough to feed. Many times when you see "the fish up" they have stunned a bunker and are figuring out how to turn it or if it needs to be tased again to eat, that's not a fish on bunker, that's a fish on his own bunker.
I say bring on the sand eels, when birds fly and pick up tiny baits and the bass let you know they are around, hopefully that will occur with plenty of fish still worth of us and reports of sand eels by the tuna guys was solid all summer. Questions are, will the cold come before those fish do, or will those fish take that wide swath outside the three mile line and head south? 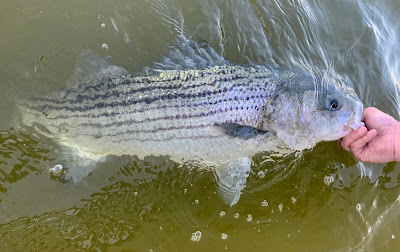 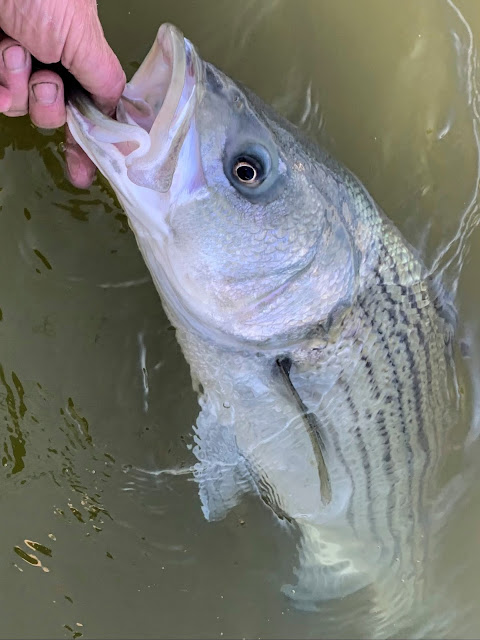