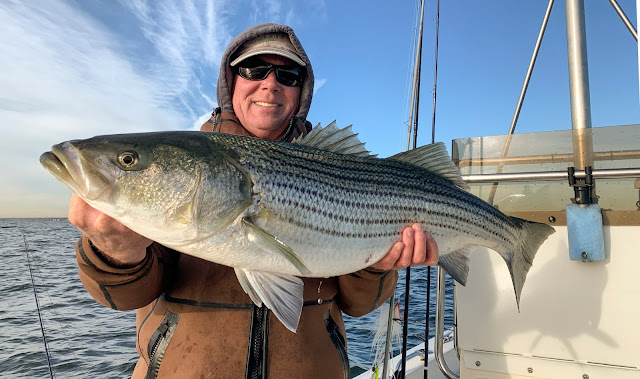 So its been about a year since that fateful day at the Atlantic Highlands Municipal Boar Ramp. Time to "shake the demons" as my friend said in a text trying to get me to go look for albies a few weeks back. I knew that day would come, just glad I wasn't doing it with the Yukon. The new ride, a 2003 Chevy Silverado 2500HD Duramax diesel is more than the truck needed to launch my big "rowboat" and take her out. But my fingers were still crossed. 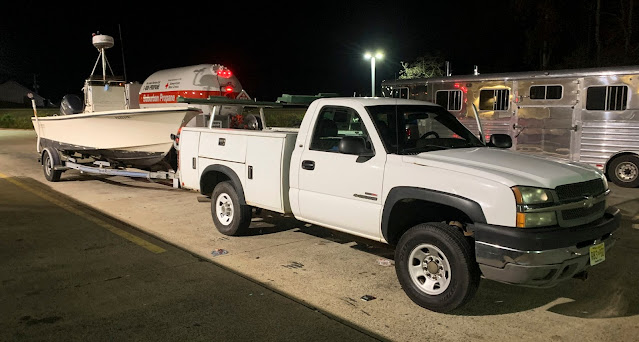 At 4 am I was at WaWa in Jackson and gave her the once over before backing down the ramp at 530 am, way ahead of the armada of boats we would encounter out on the water. Leif was ready to go and watched as I pushed her off the trailer and went to fire her up....clash, bang, boom. WTF? So it was hook her back up and pull off to the side and figure out WTF is going on with this battery/charging set up my beloved bud Jim custom wired up for his own custom sled. But now I had to do some diagnosing and fixing, and quick. 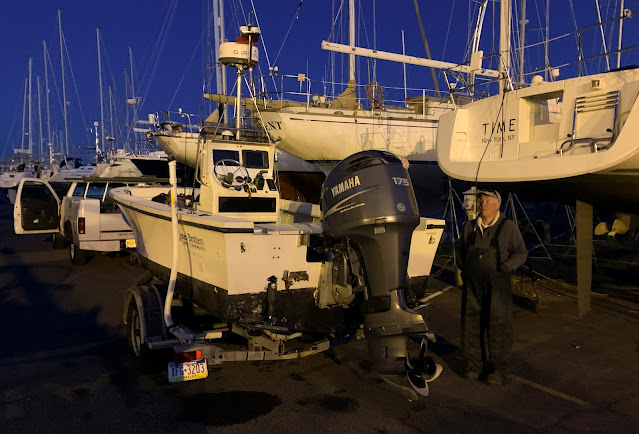 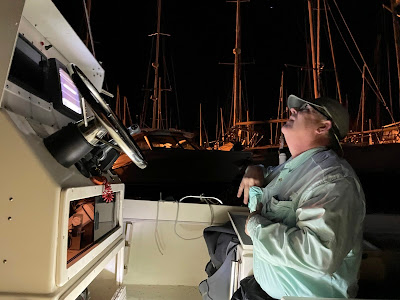 I tried jumping it, no good. I switched up the wires to the battery terminals, no good. I had the 24 volt and 12 volt system on and off again in different intervals, no good. I charged her and somehow after an hour she fired up. To note, she ran yesterday and was on a charge all night. Go figure. I don't know if Jim is in heaven looking down laughing at me or trying to whisper in my ear quick fixes. 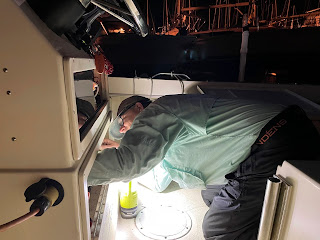 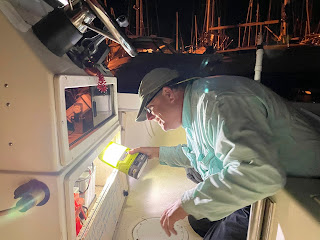 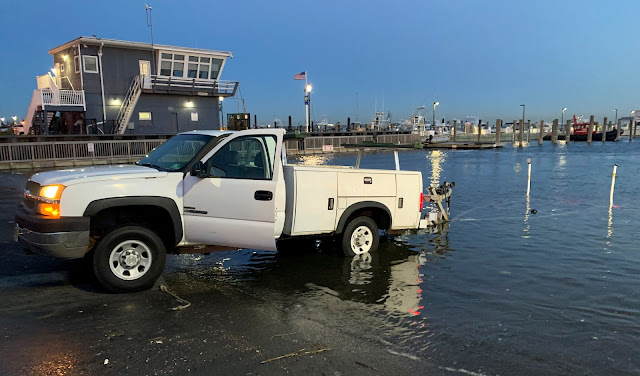 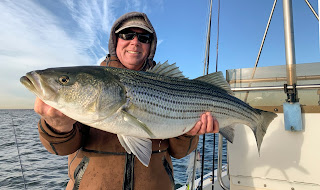 We made it out to the grounds, Raritan Bay and froze our arses off on the way out and until the sun rose and the turbines slowed down a bit. NE wind brought cold air and some chop to the fleet. We stayed away from the trollers, and there were a lot of them, and the livening and shad drop and reel crowds. Birds were always looking and here and there they would stop on bait pushed up to the surface. One time it happened right next to us and Leif landed a beautiful, say 25-30 maybe pound bass on an Ugly Ass Fly in black and something. I won't even go into if this thing caught any redfish while he and his wife were down in South Carolina last week. Alright, one was over 40 inches. 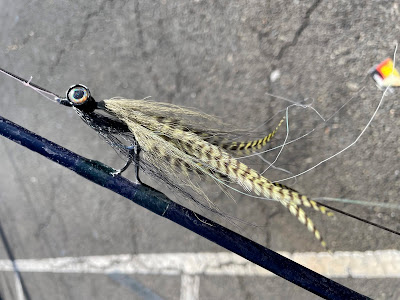 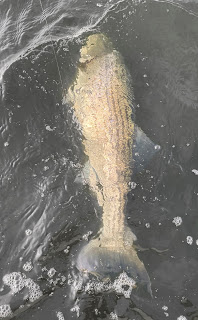 Someone asked if I caught...duh. I am the Captain of the boat and need to pay attention at all times to ensure the safety of my sports and of other boaters. I do not have time to fish, nor is it my priority when I am behind the wheel. Ok, truth be told, I put a sweet looking Hollow Fleye on their nose about 6 times and had no takers, so I'm sticking with the boating safety story. 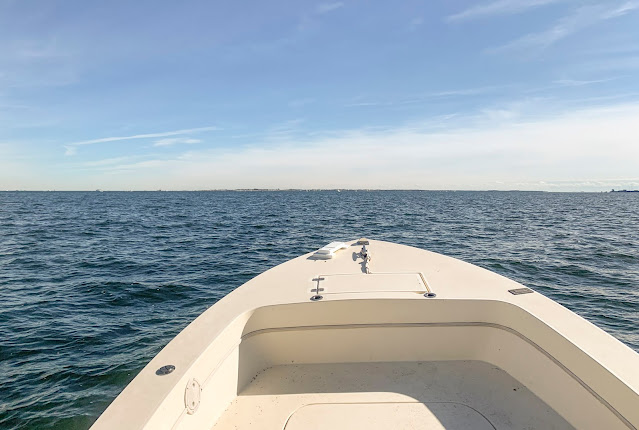 We ran out front in some wind against tide slop and found boats almost literally on the beach. Big bunker was from the beach scarp to about 300 feet out for about 1500 feet. Most, well all, were livening and it just didn't interest me to stick around so we left and went looking. We headed back into the bay and drove around before calling it a short day about noon. Funny thing, as I am heading back into the yard the gate keeper stops me and says, "Be careful, its dead low tide".....Gulp! 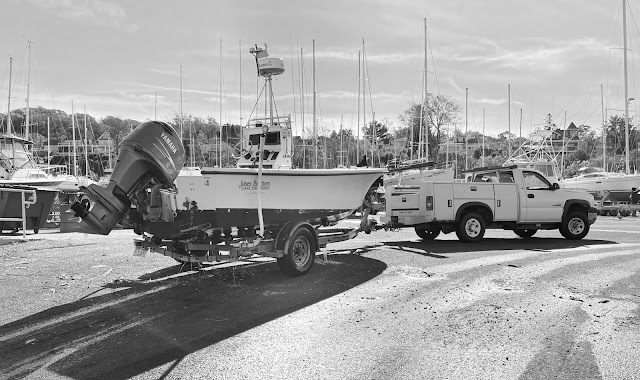 So it came out no problem and we walked over to see a happy chap cleaning his two slot and bonus tag fish. One of them had a large bunker in its gut that took up its entire stomach cavity. You know 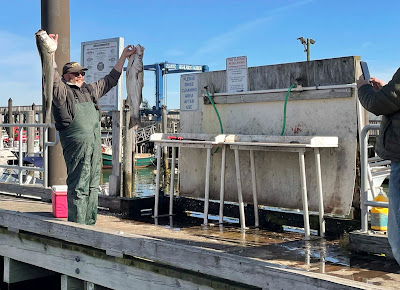 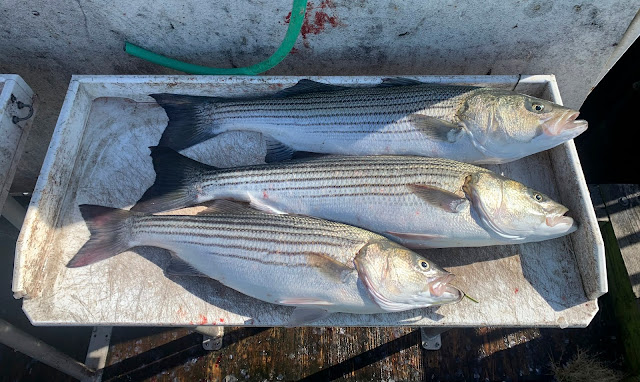 my feelings on the slot, and I don't care about the redfish and what they did down south. The overs are getting caught, and tell me why trollers don't shut down their engines when they hook up but continue to motor while the guy drags the fish up from the depths and throughout the water column, and "thrown" back in, the slots are targeted and harvested, and the ridiculous bonus tag because we don't have a commercial fishery is in full swing, why?, because a guy can go home with a fish if he doesn't catch a 28-35" slot fish.
Let me ask, if we "save" the big girls by having a slot, eventually they will die, either from old age, illness, predation, or by fishing mortality, what classes of fish are going to take over the heavy lifting of reproduction? The ASMFC should be disbanded, period.
And last thing. Give me some peanuts and sand eels, this big bunker fishery isn't all that for the fly fishing only angler, especially when the bunker are deep and the stripers aren't "up". Hopefully the sand eel bite will be good before winter comes in and shuts it down, or freezes me away.
Posted by The Average Angler at 4:53 PM