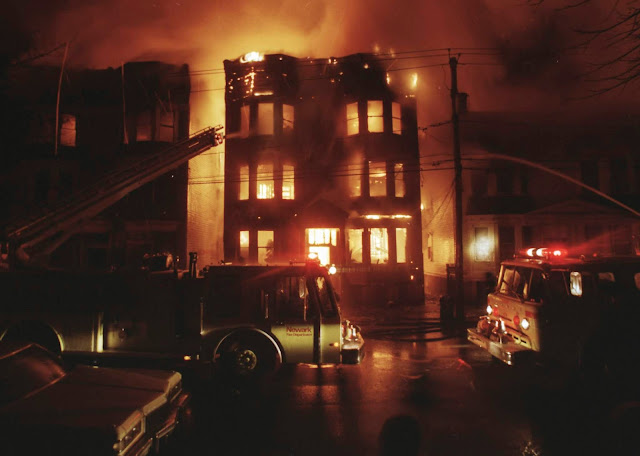 I remember taking these pictures sometime in 1988. It was before I got on the job in Newark. I was living on Warren Street in a partially vacant building fulfilling the residency requirement for the applicants. I spent a lot of time hanging out at my local firehouse, Engine 7 and Battalion 1, located at 'The Rock", where West Market Street, Warren Street, and Hudson Street meet.

It was Friday night and someone pulled the box on the corner of 18th Ave and South 17th Street, for those that know, its right alongside West Side Park. Six Engine reported nothing showing and then was flagged down for a smoke condition in a large three story vacant frame. It was a small fire and was put out with a booster line. A Signal 100 was sounded alerting the Arson Squad of a fire started, well, on purpose.

I came back the next night and checked the run book and they pulled that box a few more times the night before. It wasn't long until the box was pulled again, and again, Engine 6 to headquarters "Signal 300" a malicious false alarm.

A little after 11pm, with the city rocking on Saturday night, the bells did their dance again, I think it was box 4465, 18th Ave and S 17th Street. This time it wouldn't be a Signal 300. By the time 6 Engine came up 16 th Ave there was already fire in the sky coming from not only the original fire building, a large three story frame duplex, but buildings to the left and right as well. It would also spread to the next block. 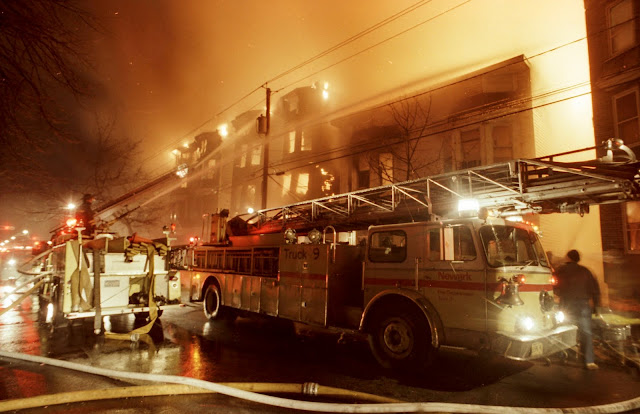 The reason I write this is to make a grime prediction. Arson for profit was huge in the inner cities like Newark for decades. Call it white flight, call it absentee landlords, call it urban decay, call it squatters rights, buildings burned, a lot of them, for many different reasons.

Back in the day, and I was lucky to have been there for it, there were no cell phones, lucky if people had house phones, and smoke detectors were just catching on. People relied on the corner pull boxes to alert the fire department. The buildings were old but built like a brick shit house and could take a beating, and often more than just a few good fires. It wasn't uncommon to roll out and see a glow or a plume of dark smoke coming over a section on the city and the first due company saying he has a well involved fire on arrival, either a bunch a frames, a "H" type brick, a restaurant, or some commercial building, going good. And that doesn't even account for the thousands of vehicle fires we had during the early 1990's. Those found fully involved on dead-end streets or on concrete blocks without rims. 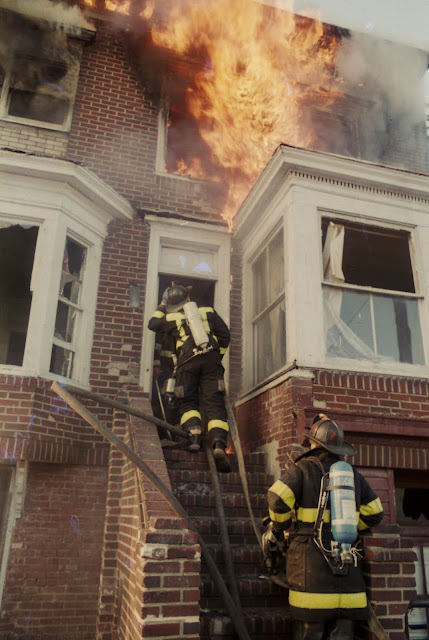 In desperate times, people do desperate, and stupid things. Arson for Profit is one of them. With businesses on the brink of extinction along our Main Streets, highways, and interstates, people start to think of alternatives. History always repeats itself, and the ugly side of people will come out. Remember all of the fraud that occurred during the Sandy recovery.

Don't be surprised when you start reading about businesses, homes, boats, and cars catching fire.....history always repeats itself. Stay safe my brothers and sisters.

Posted by The Average Angler at 3:53 PM