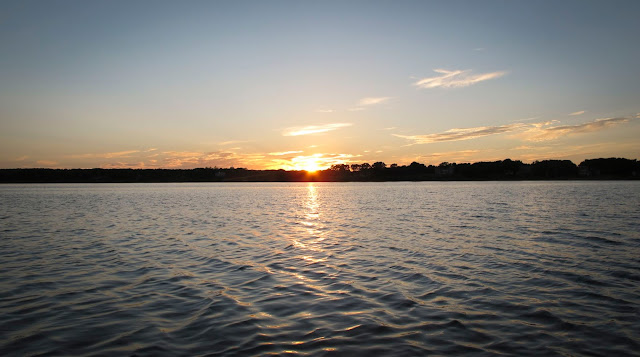 Took a lone ride across the island to try the outgoing. One thing we've learned is that we are here for tough tides. Dead low has been 7- 9 am and high 2-4'ish and then night tides high after midnight. The last few days we've had more wind and less sun. To sight fish you need both or at best just one.

So on Day 3 night I waded into the pond to see if I could see anything popping. Nothing. The bugs started getting the best of me as the wind died so I decided to back out. Once in the truck I approached a packed Big Bridge and saw the back-up lights light up as someone was pulling out. I pulled in and sat looking out as the sun set. Most of the anglers were on the jettys on the outside of the pond and no one was inside.

Just when I thought I was done I saw fished started to rise in the moving water in the channel which was in casting range. Funny thing was they looked like trout rises, and I saw heads. I jumped out, threw my waders on, and loaded a black floating sand eel fly. As I stood waist deep I still didn't know what kind of fish I was throwing too, then I saw the dorsal fins.....bass!

First cast was dead on and let it float from right to left without a tap. The fish were still up and the second cast was just as good but this time I twitched and BAM! Explosive strike and the fish went straight out from me in a line and had me quickly into my backing. With the current I thought it was a 20 pound fish.

So now the question is....where's the picture. Well I got the fish to hand, thumbed it with my left as I used my right hand to pop the fly from his thick and big upper law. As it popped the fish bit down and wriggled in a way that turned my wrist. My thumb is raw and some pain sensor, coupled with then twisting action, made me release the fish. It was as big as my 33 inch from Day 1 on maybe even a touch bigger. I wish I had a picture but the memory is just as good.

Posted by The Average Angler at 10:50 AM