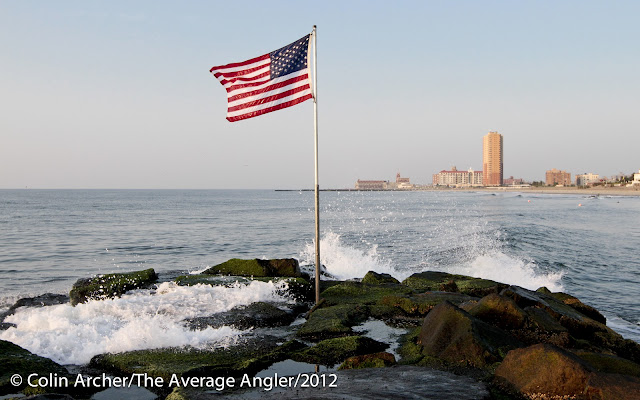 Tonight the town of Allenhurst will vote to pass a resolution signing the town up for beach replenishment in Allenhurst. They will join the towns of Loch Arbor and Deal in allowing the Army Corp of Engineers and NJ DEP in unprecedented pumping of sand up throughout "Jetty Country" as it is known to anglers that fish northern Monmouth County.

During the 1990's Elberon, Deal, Allenhurst, and Loch Arbor voted against beach replenishment. Beach replenishment has occurred from Sandy Hook down to Lake Takanassee and from Asbury Park down to Cape May, skipping a few State Parks and towns along the way.

Sadly, the momentum has already shifted and I feel this will happen. Although the initial plan calls for returning the beaches to pre-Sandy profiles, once the light turns green anything can happen. Sand will be pumped in, groins will be notched, natural beach structure will be lost, and the environmental impact in this area be great.

Yes, for a season the beaches will be big, but Mother Nature will do what she wants to do. Just look at Long Branch and Monmouth Beach if you want to see what post beach "nourishment" looks like. Take a walk and don't fall off the steep cuts that are on the beach, and, in the summer be careful when you step, or dive in the water.

"Dunes" have become a dirty word as beach goers and property owners don't want valuable square footage taken up or their views impeded.

WHEREAS, The wind and tidal surge associated with Hurricane Sandy has caused significant damage to the recreational beach facilities along the beachfront as well as beach protection structures along the entire Allenhurst oceanfront; and,

WHEREAS, As a result of this damage, FEMA has developed a plan to replenish the beaches along the coast of New Jersey from Sandy Hook to Cape May; and,

WHEREAS, It appears that the entire coast will be covered by a Federal Grant that should result in little or no cost to each municipality accepting this proposal; and,

WHEREAS, The preliminary proposal requires only public access to the beach every one-half mile of beach front and unrestricted parking in the area of beach access; and,

WHEREAS, Oceanfront property owners will have to grant access to the contractor to apply the sand and to beach visitors who wish to use this beach according to the rules that apply; and,

WHEREAS, The Board of Commissioners, after consulting with the Borough Engineer and Borough Attorney have decided that, subject to the final proposal for beach replenishment and an agreement with oceanfront property owners, they agree to commit to this program as required;

NOW, THEREFORE, BE IT RESOLVED, By the Board of Commissioners, that a preliminary agreement be made, subject to a discussion with the oceanfront property owners, where applicable for the acceptance of beach replenishment.