Crazy day in the tri-state area yesterday as wind, rain and snow arrived and was worse than predicted. Took my wife 7 hours to home from Rutherford. She left at 4 and opened the door at 11pm. So the day after the blow, and it was a blow, I decided to give it a shot. I was looking to fish but never wet a line. I started just after dead low finding the water chocolate milk and no signs of life except for some very excited surfers. Wind was stiff from the NW and everyone was waiting for it to swing west.

I checked on Sea Bright and found some very big changes from last week. We must have lost over 4 feet of sand because rocks that were lust exposed are now returning to a pre-replenishment look. The dunes took a beating also and the beach scarp is now a gentle slope that leads out into the ocean with most beaches showing no or little structure. There isn't a trough anymore and after the incoming waves hit the outer bar the water just flies up and down the beach. Too shallow to hold fish and waves too big to get out and attempt to fly fish. 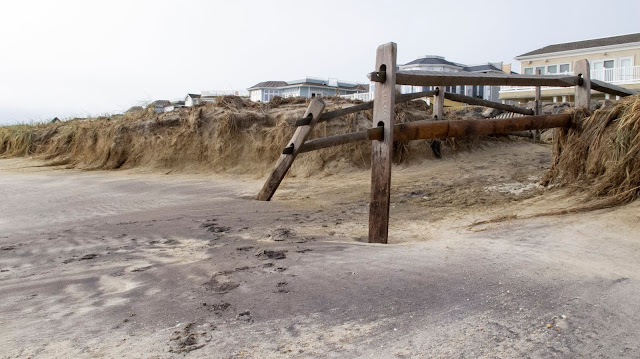 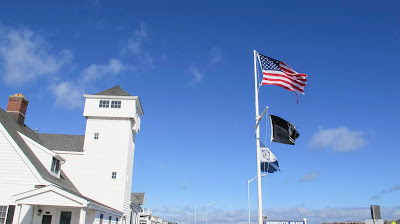 Down the beach I found a ton of birds working over the wave troughs so I jumped in my truck and took the short ride. It tool a while to actually see what they were picking up but I finally saw them with sand eels in their beaks. The water up there was still chocolate milk in color and big enough waves breaking that I didn't feel like competing with. I watched a long while for any signs of fish and spent most of the time with my head down looking for a sand eel on the beach to confirm my beliefs. 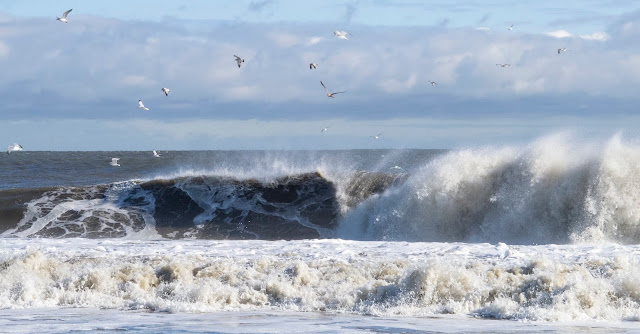 I wondered what a guy throwing an Ava (metal) would have done under those birds and as I made my way out that guy showed up. He was wearing workbooks, and didn't want to get wet, so after I watched a few half-hearted casts on his part I turned and left.

I'm sticking to my prediction that it will be, if any, a decent sand eel bite down in Ocean County around Thanksgiving, or after, but that will do it for this year. The jig/ sand eel bite is strong on the boats with far too many boats killing and keeping far too many big breeder females. The next time I'm at the marina I will take a picture of both-job-filleting guys do on these big fish. Half of the meat is still left on the rack to rot. It really takes away from the sport of striped bass fishing for me. 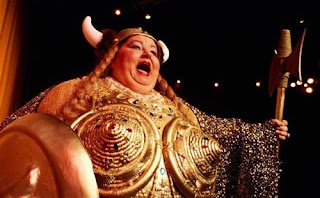 If the fish don't come in on the sand eels than the fat lady has started to warm up her voice for the year.....
Posted by The Average Angler at 1:12 PM