11.12.18 Nice day with Mike on the schoolies....and another camera malfunction 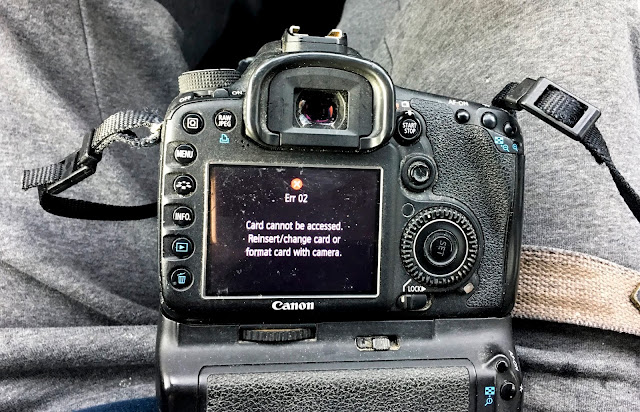 So after last weeks mishap and forgetting to a card into the camera and just about missing proof of the day Joe and I had I made sure there was a card in my camera. After we were back in and the boat was all gussied up I sat in my truck to take a look at todays pics.......and then I saw the above.

I had nice pics of Mike holding bass to 26 inches. I ad pics of the swarms of birds. I had pics of the armada of boats big and small, drifting and trolling, across the ocean. Luckily I took a picture of one bass with the iPhone. So Mike and I got underway just before 7am. Marina was bustling and I was hoping too find good fortune when we rounded the Hook. We tool the long drive down to the Rocks and out to the line and found nothing. By the time I got there we were cold. 30 degree temps with only the wind from being in a moving boat did it.

With it dead I figured I'd run to the other state and I am glad we did. We were east of the action but eventually found the birds and boats. The fish weren't up and it was a tough fly-rod day. They ate, only after multiple fly changes. They liked the extra heavy and large Clouser on the 450 sinking line. Miserable to throw ut it got it down to them. Jigging with metal and shads was the spinning rod trick.

We played for two hours before going to look for bigger fish. I guess guys caught them, made the trollers did. Coolest thing we saw today after the move was a bass on top attempting to right a bunker so it wold go down head first. It took about 20 seconds and we casted to him trying to offer him something easier, to no avail.

We had the outgoing and then the dead-slack and went to Keansburg to check the dead calm, and dead fish, bay. Water temps just below and just above 50 depending on where you were and what the tide was doing.

Wish I had better and more pics. Great guy, nice day, wish we had a better steady bite with some bigger fish.