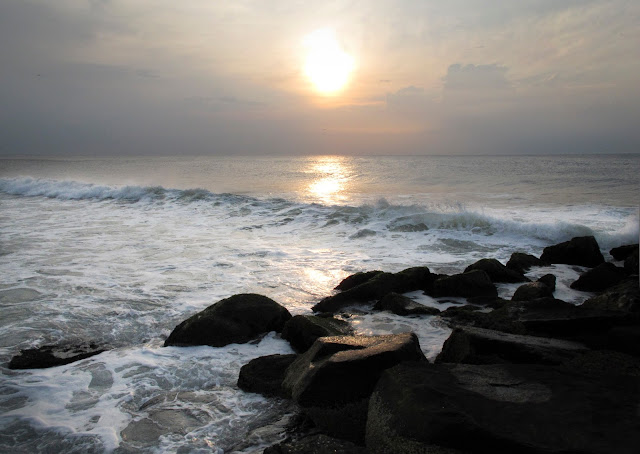 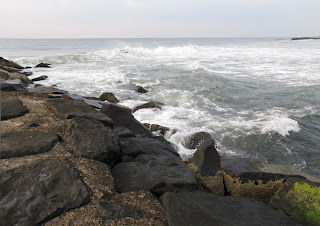 Nice to be back on the beach at home. Thought I might have woke up to T-storms but it was a nice morning at 445 when I hit the beach. SW wind, incoming tide, surfers paradise with the quick big wave sets. Started down south and fished for a bit before bumping into Bill who, because of the decline of fishing along the Jersey Shore since he started in the early 1990's, said "It's dead out here". It was nice talking with him and he was using a sand flea fly in the trough trying to pick a bass or a fluke.
I decided to head up north and fish a spot that was looking fishy the last time I was there. Now, I know thing s change, but there's no way groins get almost covered and 25 feet of sand just appear on the beach. Either the city or the county is using machinery to "maintain" the beach replenishment. If they continue to do this "PEOPLE WILL DIE". The beach scarp is sharp and the water coming back down the beach will sweep kids and the train out to sea. It is really criminal.
There were no bass home but I did pick up a few sun dials before getting a nice hit almost right on the beach. As I brought it up I said to myself "that's a nice keeper fluke", but then went back and forth in my head thinking that it just might be short. Well, I kept it, hoping, and after a lot of deliberation, that it was legal at 18". Back at home on the tailgate and with a tape measure it came out just at 18", not a millimeter under or over.
I forgot how much I liked fluke fishing from the beach. It's a great reward to the new surf fly rodder and a nice by catch when your heart is set on a striper. Morning trips run first light to 9ish- just before the beach invasion occurs. Give me a call 732 261-7291 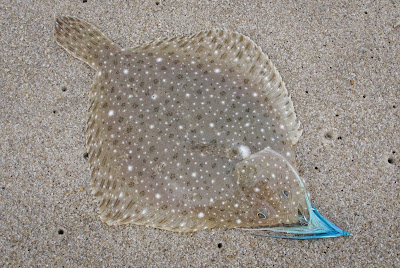 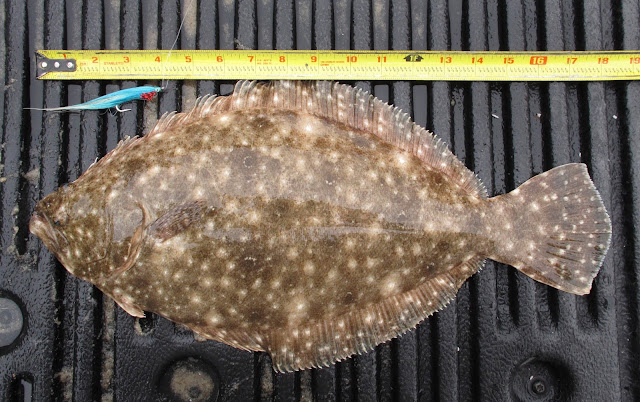