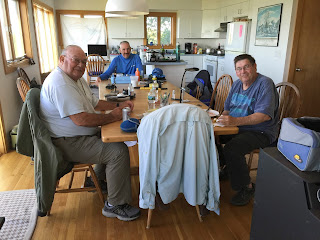 Last two days have been the best, for me, during the trip. The sun came out and the wind died down so the sight fishing was better. We'll the sight-seeing was better. Last night I took a solo trip to "The Brickyard" as it's called and hit it just as the sun set. In two hours the fish, all small micro to school size, erupted up and down the beach on sand eels. I estimated that I caught over 25 bass. I wish I had a six weight set-up with me. I spoke with a guy who stayed after I left and he caught two nicer fish at 33" and 28". Around 10 pm I went down island to a pond were I had caught two nice fish the night before, but just as the tide started to ebb good, the lightning started. I wanted to stay, but the fish Gods were telling it was time to go.
Today was our last day and we didn't waste it. Even though I got in late I heard the boys up early and rolled out. We were out there around 8 o'clock and it was blue bird skies and little wind. I picked up a small fish with a sinking line but then went sight fishing. Over the next few hours I saw good numbers of fish, and big fish and got a few follows and one to eat, without me knowing or setting the hook. The boys were dredging the channels and did well, seeing big fish move into the pond. Arond 1230 it was time to make a call, go home and pack and relax, or fish. I decided to stay and wait for the 1 o'blockish turn of the flood tide. I waited but got tired of waiting so I started walking the skinny water pond. In the distance I saw a big blow up, then another, then a mini blitz. I got on the phone and Jerry and Joe took the ride and by the time they got there, it wasn't over, it just wasn't close. Before they got there I had shots, but they didn't take my Steve Farrar MV Baitfish or bunny fly.
At night we hit the same place I had them last night. Again, small fish, landing 16 bass, 6 hickory shad, a scup and a fluke. As long as a week is to be away from home, I wish I was staying as this week, post big Strawberry moon, is going to be real good. Just when you think you're getting a handle on things, it's time to go. Have to thank Joe Carey who really does the heavy lifting in putting this trip together, and the other guys for their experience and knowledge of striper fishing and of Martha's Vineyard. Hoping to be back next year, as it's something I really look forward too. 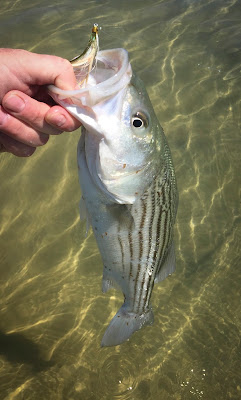 Posted by The Average Angler at 10:38 PM