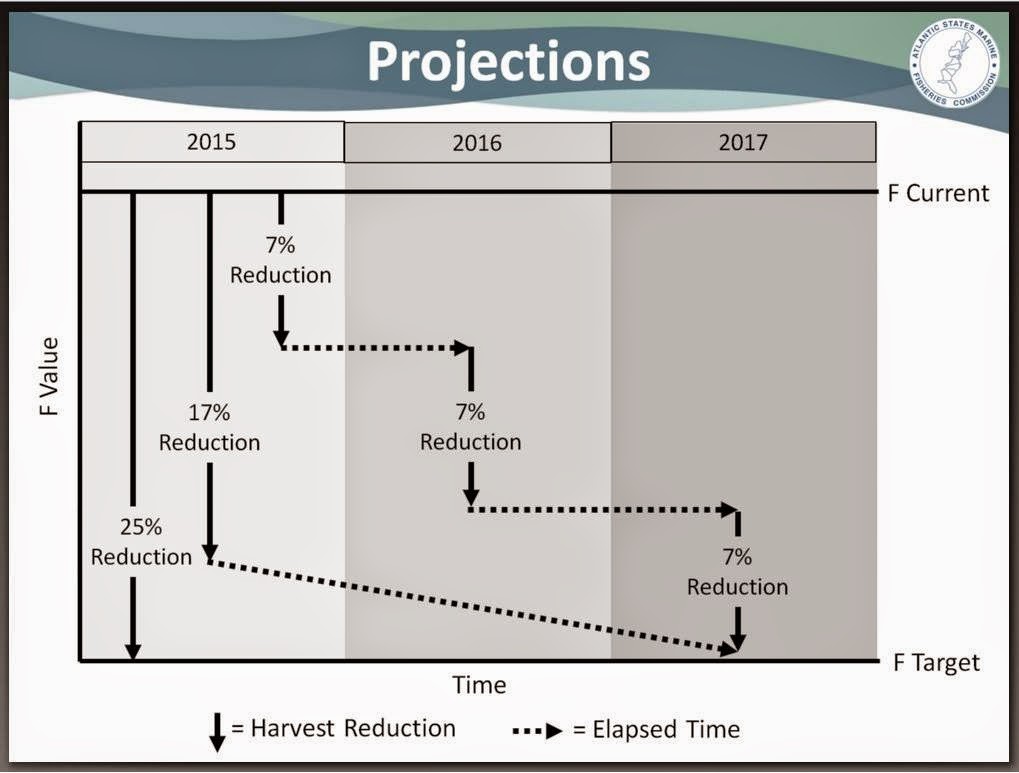 Basically "we" all want a 25% reduction in one year, the lobbyists and politicians and the money will put the pressure on a three year plan......lets see who's running the asylum at the ASMFC

Alexandria, VA – The Commission’s Atlantic Striped Bass Management Board approved Draft Addendum IV for Public Comment to Amendment 6 to the Interstate Fishery Management Plan for Atlantic Striped Bass. The Draft Addendum proposes new fishing mortality (F) reference points, as recommended by the 2013 benchmark stock assessment, and associated management measures to reduce F to a level at or below the proposed target within one or three years.

The Draft Addendum responds to results of the 2013 Atlantic striped bass benchmark assessment indicating F in 2012 was above the proposed F target, and female spawning stock biomass (SSB) has been steadily declining below the target since 2006. This means even though the stock is not overfished and overfishing is not occurring, SSB is approaching its overfished threshold and stock projections show SSB will likely fall below the threshold in the coming years. In addition, a similar decline has been observed in total harvest.

In response to these factors, the Draft Addendum proposes management options to reduce fishing mortality to the target level. The Draft Addendum includes a suite of management options to reduce recreational and commercial harvest along the coast and in the Chesapeake Bay under three reduction timeframes. The timeframes include (1) reducing F to its target in one year with a 25% reduction in 2013 harvest in 2015 (2) reducing F to its target within three years with a 17% reduction in 2013 harvest in 2015, and (3) reducing F to its target within three years with a 7% sequential reduction in harvest for three consecutive years starting in 2015. Specific options to be considered include bag, size, slot and trophy size limits for the recreational fishery and quota reductions for the commercial fishery.
Given the Albemarle Sound/Roanoke River (A/R) stock of striped bass contributes minimally to the
coastwide complex when compared to the Chesapeake Bay, Delaware, and Hudson stocks, Draft Addendum IV proposes it be managed by the State of North Carolina using stock-specific biological reference points. These stock-specific reference points, which have been approved by the Board, would result in a separate quota that is set to maintain F for the A/R stock at its target level. The Board tasked the Technical Committee with the continued development of Chesapeake Bay-specific reference points for future use.

It is anticipated the majority of Atlantic coastal states will conduct public hearings on the Draft Addendum; a subsequent press release will announce the details of those hearings once they become finalized. Fishermen and other interested groups are encouraged to provide input on the Draft Addendum either by attending state public hearings or providing written comment. The Draft Addendum will be available on the Commission website (www.asmfc.org) under Public Input the week of August 11th. Public comment will be accepted until 5:00 PM (EST) on September 30, 2014 and should be forwarded to Mike Waine, Fishery Management Plan Coordinator, 1050 N. Highland St, Suite A-N, Arlington, VA 22201; 703.842.0741 (FAX) or at mwaine@asmfc.org (Subject line: Draft Addendum IV). For more information, please contact Mike Waine, at mwaine@asmfc.org or 703.842.0740.
Posted by The Average Angler at 5:08 PM