08.22.12 Out looking for albies at sunrise but found blues blowing up rainfish...and another rod back to Orvis 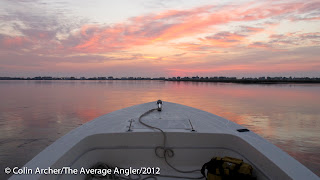 Had Rich on the boat today and it was a great day. Beautiful morning as we turned the Hook and found a flat ocean where we could see any commotion on top for miles. Found lots of bunker around North Beach and then made the run down to Monmouth Beach. When we pulled in we found birds working about a mile off and took a ride over. We found pods of bluefish on rainfish and Rich started

out using metal to land a few then took the Helios and casted for an hour without a hook up. I wanted to see some topwater action so I tied on popper that my buddy Rob over at Orvis New York sold me last year. We watched and waited and when the birds and the fish were in range a quick cast into the middle almost always got a hit. Surprisingly the popper held up to a few good bites and swallows from the bluefish. 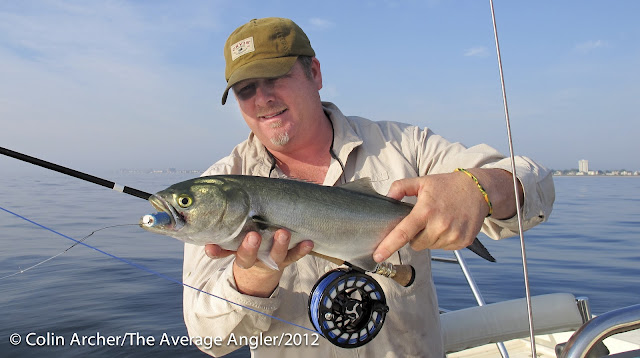 So there's the downer part of almost every outing, trip, or vacation. Well, the bluefish dispersed so we made a move out to the Shrewsbury Rocks to prospect for some fluke. As soon as we stopped we hooked up but they were all shorts. It was a lousy day to drift for fluke, and we tried several locations and caught a bunch of sea robins, and sea bass before putting two keepers on ice. On our next stop near a bunch of lobster pots on structure Rich stood up, set the hook, took a step, and stepped down on my Helios. The picture below tells tells the rest of the story.
The wind turned from the S and we decided to drift the Bug Light before heading in. We had a great time, caught some fish, had a fly rod in Rich's hand.....and under his foot! 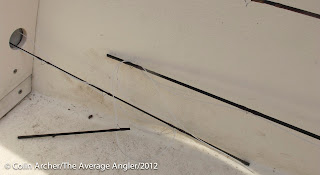 Posted by The Average Angler at 6:58 PM