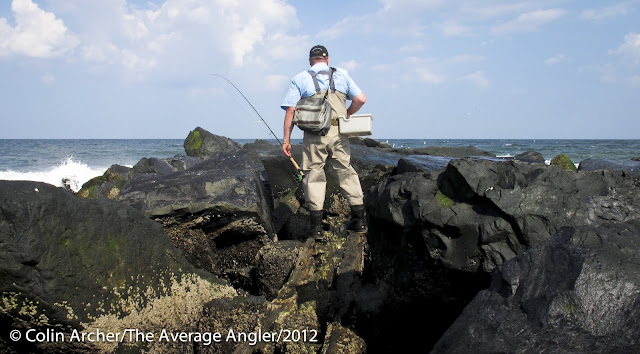 I spent most of today on assignment shooting at a Mosque in Newark. Met some great people and and will return to the Brick City again tomorrow for some more. Before I left for work I got a picture message from my buddy Al of a couple of small blues he got on a popper this morning. I was lucky to get home early and with the tide starting to move around 3pm I decided to take a ride down.
I found gulls hovering over bait that was getting bothered at the end of the groin so I made my way out to give it a go. The wind was gusting 10-15 from the SE so casting into the wind where the fish and bait were was a mess. Either the wind just hit the fly and line and dropped it short or the wind would steal the line from my stripping basket and carry it behind me along and in the rocks. I was determined to get one and I tied on a Bob's Banger and double hauled my ass off. And then I almost broke my ass when I slipped off a rock. I gave up on that route and switched over to my Depth Charge line and tied on a Clouser and tossed it into the stained and dirty water.

After an hour I was done....without a good bite but I did have a bunch of tiny snappers gumming my flies near the rocks.
Posted by The Average Angler at 5:52 PM