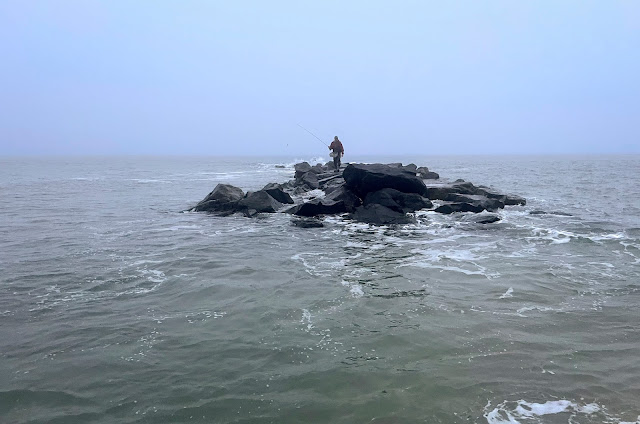 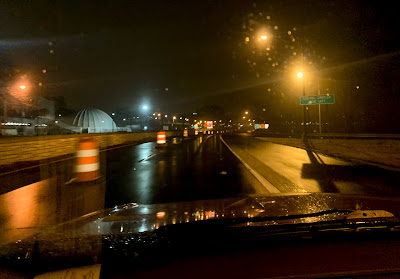 Happy New Year! Well, I'm on the board. Was hoping for something a tad bigger, and maybe more of them, but for me it was two hits and one fish. It happened soon after I arrived around 6 am, in the dark, on a black and purple Hollow Fleye. My goal was get a 2022 fish and that was met so no complaints here. Leif had one in the dark also and followed it up after the light arrived and the tide 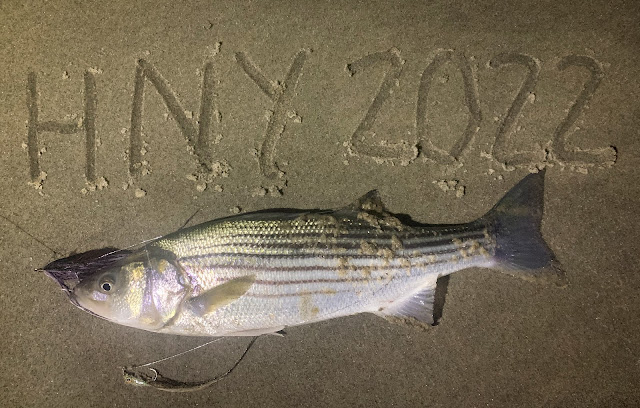 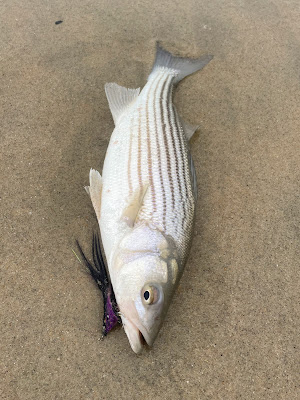 turned to the outgoing. Cookie cutter fish are around, not the micros, but the next class size up, say 20-26, with an occasional just under 28". That's what keeps people out there, that rouge big fish, which have been caught at Sandy Hook and IBSP, fish in the mid teens, in pounds not inches. While I never judge, because I've had plenty of bad-luck things happen to me, I was a littler puzzled seeing a guy stuck in the sand here in Monmouth County, those pics usually come from the Ocean County beaches where the Beach Buggy passes are sold and driving on the beach is allowed. 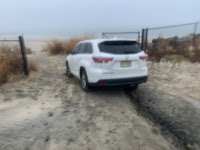 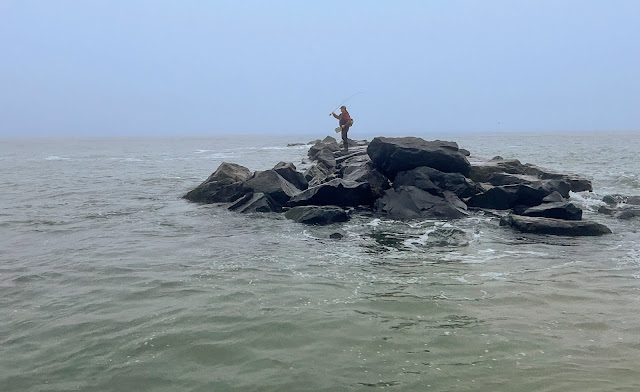 I started on the beach but then wanted to hit the rocks, so a quick walk and float out to them in between sets got me there but there was no fish for me. It didn't matter, but then I had one under my belt and the rest till mid-morning was just gravy. What was sad to see, and hear, was near perfect conditions 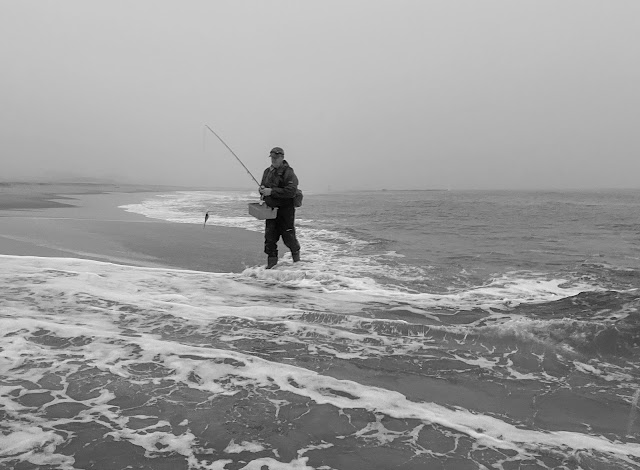 with the hum and lights from the machinery up on the beach and out in the ocean pumping sand on beaches that were just starting to recover from the last 20+ million dollar beach replenishment project. Leif did some digging around and found those open front homes in Deal go for 8-15 million, and pay around $500,000 dollars a year in real estate taxes. With that comes their votes for Frank Pauline who in turn provides them with beautiful beaches they can set up their patio furniture and fire pits on and drive their ATV's around at night. Sadly, it's killing the environment and the life that it should hold. So I am glad this past year's scouting trips brought me to new waters, as I think this stretch won't be the same and give up less fish then it did this year. So bring on the spring and the fresh and salt waters that I have discovered that hold good populations of striped bass that are off the beaten path. Below is a picture of Roseld Avenue, get a quick look at it if you want because it won't look like that for long. 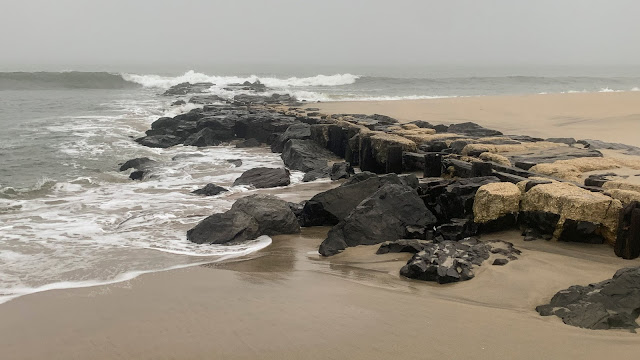 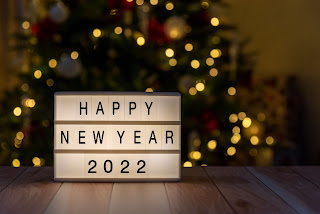 And with this new year what are you doing? The same thing, something different? If your job sucks, if your house sucks, if your car sucks, if your waistline suck, if your habits suck, if your relationship sucks, then maybe it is time for a change. Remember, things and other people won't change, only you can change yourself, and change those things that don't or can make you happy. You're entitled to that. If your New Years looks like the post I found below maybe it time for you to change. 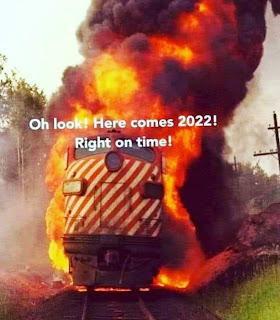 We all, well most of us, try and make some New Year's resolution to improve ourselves or make us happier. Again, others can't make you happy, you have to make yourself happy first, and then see where other people fall in your spectrum between misery and happiness. I saw a few affirmations on-line, you know the ones we hate to read or seeing hanging up in our therapist's office, but these two I liked. 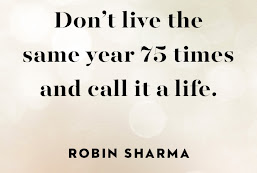 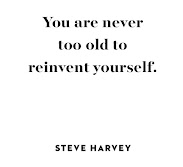 For me, I want to be happy, maybe win the lottery, be a little more healthier, and work to make those around me have a better day and live a better life. It is amazing how the hurts, traumas, and poor choices from our past rear their ugly heads, in some way, every single day. Well, it's a good time to acknowledge them and bury them somewhere and lessen the burden of hurt and fear we carry around. 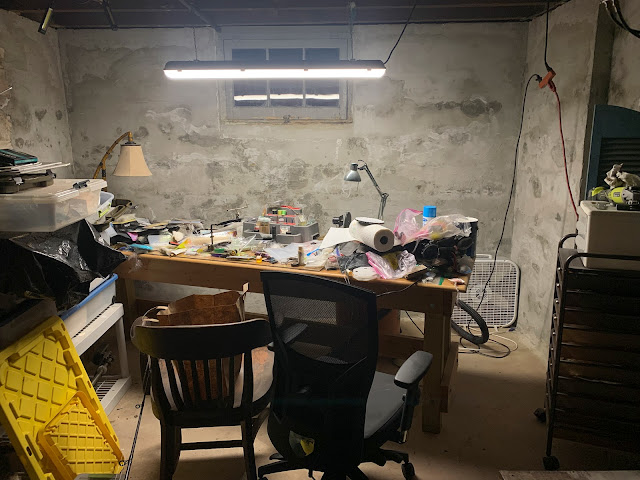 I am putting organizing my fly tying/ man-basement-cave on a list of to-do's for the new year. It's a mess down there and I should have a cool place to hang where my stuff is organized, thats funny, and able to be enjoyed. I need to get on that vice and get my herring and bunker fly selection built up for the upcoming opening of the bays and rivers, March 1st, in just about 90 days. The countdown has begun. 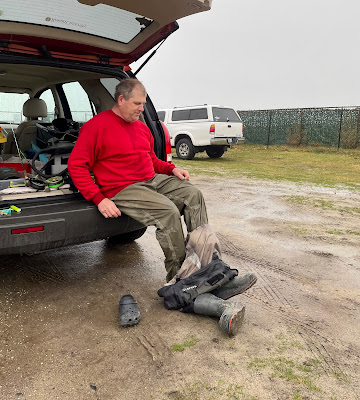 I should also put a new pair of waders on my to-do list for the spring. My cheap ones are great for the beach when the water temperature is above 60 and there isn't a crab shell on the beach that I could roll a ankle on, but I need a serviceable and durable pair. My Simms waders above have seen their day and it takes me about 10 minutes to get out of them because the inner fabric is work and shot, and they leak in both feet. I deserve those also, well at least I think I do, maybe I'll treat myself since everything else I buy is old, beat up, in need of love, and never really just nice and new.
Again, to you and yours, I hope 2022 is a happy and healthy one.
Posted by The Average Angler at 12:14 PM